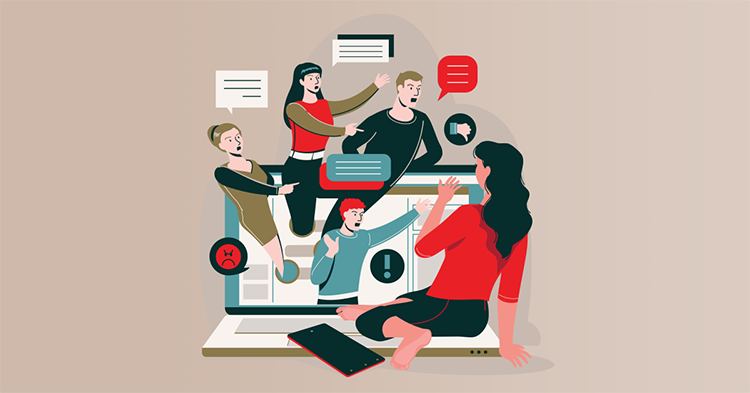 Charlie Kuhn gets nervous when educators say their school has a “zero tolerance” for bullying. He calls the statement a “red flag.”

That might sound surprising. As the executive director of Cultures of Dignity, a Boulder, Colorado-based organization that helps educators and parents respond to youth’s needs, he’s dedicated his career to understanding how young people interact and how they can succeed. He doesn’t like bullying. He doesn’t want people to bully or be bullied.

But he doesn’t want to avoid it.

A “zero tolerance” policy can create the impression the school is not a safe place to have conflict of any kind, or practise learning to resolve it, he says.

“The goal is not to avoid conflict, but to learn how to handle conflict confidently and treat ourselves and others with dignity,” Kuhn says.

Teachers have addressed this for decades. But the omnipresence of digital communication changes social dynamics. Educators must respond with great care to students’ concerns about cyberbullying. Teachers need to make sure they treat students the way they tell them to treat each other: with dignity.

Most students experience cyberbullying—they’ve been bullied, are the bully, or have witnessed some form of negative interaction online. In 2015, the Canadian organization MediaSmarts released a report about 12 to 18-year-olds who have experienced cyberbullying. Examples included being threatened, embarrassed, gossiped about, or made to look bad online. Of the 800 youth who responded to the survey, 42 percent said they were cyberbullied in the previous four weeks; 60 percent said they had witnessed cyberbullying in that same time.

“Young people really are in an online space that mirrors their offline space,” says Matthew Johnson, MediaSmart’s director of education. Many consider it rude to not be connected to someone on social media if they have a relationship with them offline.

Online relationships often remove cues that foster empathy or create proper context. Sometimes, people don’t treat others as “entirely real” when they’re communicating online, says Johnson. They can’t see the other person’s facial expression or body language; they can’t hear their tone of voice. They may not know an interaction has crossed the line from fun to harmful.

Online communication doesn’t happen in real-time. People can interact with different people in different places at the same time. They also can’t be sure who else is watching the interaction, or when. As individuals use social media platforms for longer, their posts become more permanent. Old posts resurface, sometimes because of algorithms, other times intentionally. This means something that happened years ago could cause conflict in the present. Countless people could read a message intended for a specific audience.

“It really is a situation now where you can’t expect things to go away,” Johnson says, describing the impact of this “context collapse.” “And you can’t necessarily expect a situation to be engaged within a particular community or space.”

Students’ offline interactions can influence how they engage with each other in online spaces. MediaSmarts has produced lesson plans that teach students as young as those in Kindergarten about how to act online. It starts with explaining to children that just like they need to agree on rules when they’re playing games at school, they need to agree with the rules for playing online.

Teachers need to help “kids understand that the online world is a moral space where our actions have consequences,” Johnson says.

This can get tricky. Teachers can watch with whom students spend their time in school, and they can craft guidelines for behaviour at school. But they don’t write the policies for social media sites. They know students are connected online, but they can’t watch every interaction.

This is why teachers can’t rely on bullying prevention programs that focus strictly on enforcing rules and reporting incidents, says Nancy Willard, director of Embrace Civility in the Digital Age, an Oregon-based organization that helps adults teach youth about how to properly respond to bullying. Teachers can’t monitor these spaces, so these approaches are “not going to work in the digital space,” she says.

Teachers can’t control what students experience in the digital space. But they can control how they respond when students bring their concerns to them.

Teachers need to drop assumptions they might have about which students will bully and which ones won’t, says Willard. Bullies aren’t just students who act aggressively because they have behavioural challenges or have a hard time making friends. Bullies are also students who have high social status. For them, bullying is about having dominance over students who threaten their popularity, or students they think are threatening their popularity. Teachers can’t show favouritism. Any student can be a bully.

All students need to learn to take responsibility for their actions. It’s not OK to say people deserved to be bullied, says Willard. But students need to understand some that actions, like posting sexually provocative images online, put themselves at risk. The situation still needs to be resolved in a positive way, Willard advises, but part of that means teaching the person who posted the images that their actions contributed to the hurt they experienced.

Teachers also need to explain to students that just because they’ve been hurt doesn’t mean they’ve been bullied. Kuhn distinguishes between “bullying” and “drama.” Bullying, he says, happens when someone exploits someone else because of an imbalance of power. “Bullying strips you of who you are,” he says.

Drama, says Kuhn, is important to the people involved, but not taken seriously by the people who are talking about it. It’s often the subject of gossip. What starts out as drama can lead to bullying, Kuhn notes, so it’s important to listen to students’ stories carefully.

A student might feel hurt if they weren’t tagged in an Instagram photo. But that might have happened because they were out of the room when their friends took it. This could hurt, says Kuhn, but it’s drama—no power imbalance was involved. It can become bullying, he says, when someone is purposefully excluded from a photo because there’s something about them other students don’t like, for example, if they wear glasses.

The distinction between bullying and drama is crucial. The research MediaSmarts conducted found that most students—71 percent—had intervened when they witnessed cyberbullying. But more than half also said one of the reasons they didn’t intervene was because they weren’t sure if something was bullying or drama.

They also didn’t intervene because they weren’t convinced things would get better if they told someone about the bullying. They were scared reporting would make things worse for the person who was bullied, or for themselves if they said something publicly. Research showed students who had been bullied were more likely to say that talking to parents and teachers wasn’t helpful, and that they didn’t give good advice.

Teachers need to show students it’s good to ask for help, says Kuhn. When a student brings a concern to the teacher, they already feel they’ve lost control of the situation, he explains. Teachers shouldn’t belittle students. Instead, they need to acknowledge how important social connections are, and how complicated students’ relationships can be.

When teachers stop and listen to their students’ concerns, they’re modelling how youth should respond to bullying. Educators agree students need to pause before they respond to someone who is mean to them online. They need to clearly explain what they’ve seen, how they’re feeling, and what they want to be different in the relationship. They need to respond properly, and consider when and where they want to address their concerns.

Any student can be bullied, or bully, but any student also has the potential to prevent bullying. Willard, who says she was bullied as a student, has seen bullied students respond by doing kind things for others. This focuses the attention off of their hurt, she says.

Empowering bullied students, or students who may be at-risk for being bullied, can be one of the best prevention methods. Aaron Cowan, an English and drama teacher at Sir Allan MacNab Secondary School in Hamilton, ON, knows this firsthand. He helps run a Positive Space group at the school. Most students who come to the weekly meetings have something to share, and bullying is a common theme. Students listen and give help. Sometimes that means ensuring students don’t have to walk to class alone, other times it just means giving a hug when allowed.

A few years ago, the group ran a one-day workshop with the Grade 9 students to address bullying related to gender and sexuality. It’s grown: topics now include multiculturalism and addressing mental health concerns. The group is looking at addressing bullying related to disabilities, and bringing the workshops to students in Grades 7 and 8 who will attend MacNab.

Cowan remembers how being bullied made him feel uncomfortable in high school. He wants to advocate for all students who feel marginalized, he says.