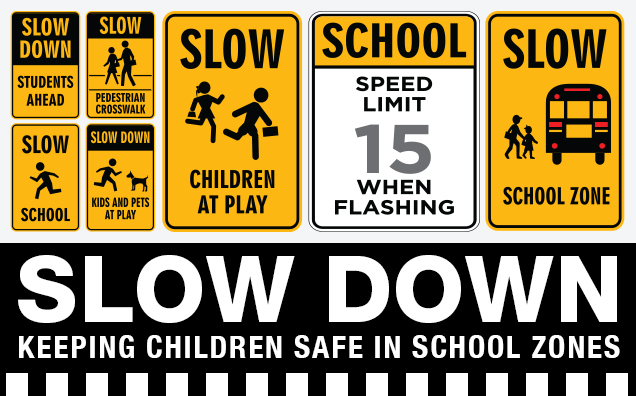 Far from being a safe haven, schools can be a danger zone, especially for students walking amongst the crush of cars and busses that converge at drop-off and pick-up times.

At least 100 children are killed in collisions while walking to or from school each year in the United States. Some 25,000 children are injured annually in school zone accidents, according to California law firm Timothy J. Ryan & Associates.

“At my kids’ school there is a little semi-circle, but it’s not an official drop point, there is no rule about where a car should stop or where a kid should exit. It causes all kinds of chaos and a lot of road rage,” said Nancy La Vigne, VP for Justice Policy at the Urban Institute and author of the guidebook Traffic Congestion Around Schools.

La Vigne’s experience highlights two key factors that impact school traffic safety. There’s a structural aspect: Why isn’t that drop-off site better marked? There is also a behavioural piece: Why is everyone driving in the first place, and why are they in such a hurry?

Experts say that in order to make school traffic safer, teachers need to collaborate with administrators and parents to address both these essential elements. Here we’ll look at the infrastructure approach, and then consider how best to address behavioural issues.

Problems occur when traffic piles up. Twice a day school zones become a focal point of activity, with busses, cars, and kids on foot all heading for the same narrow entry zone at about the same time. A structural approach calls for schools to separate out the different modalities.

“We don’t want parents intermixing and interacting with busses because they operate very differently and it impacts the sightlines. We like the busses to have a designated drop off and pick up area, while parents have their own designated area, and parking is separated from both of those,” said Jonah Finkelstein, a transportation engineer with Spack Consulting, a Minneapolis-based transportation consultancy.

By separating cars and busses, it becomes less likely that kids will be darting in front of busses, where it can be hard to see them.

Add to this essential infrastructure: Specifically, marked crosswalks to guide pedestrian safety across the travel lines and through drop zones. Crafting those pedestrian passages takes some forethought, however. “We worked on a project where they had people walking four hundred feet out of the way to get to the crosswalk,” Finkelstein said. “As a middle schooler you are not going to go 400 feet out of your way to cross. You’re just going to run across the street.”

Taking a step further back, it’s possible to look at larger-scale design elements as a way to ease the pressure. At the National Safety Council, Director of Transportation Safety Alex Epstein recommends routing pedestrian approaches in such a way as to pull kids away from the crush of pick-up and drop-off traffic, rather than funneling everyone toward the same entry point. “The goal is to separate motor vehicles from pedestrians so they don’t all enter at the same place,” he said.

That kind of fix can help to make it safer for kids at the point of entry, but hazards around school safety often begin even before the edge of school grounds. At many schools, the morning and afternoon pileup forces traffic to queue up in adjacent residential streets, creating an additional level of hazard.

“Cars can line up in front of people’s homes, making it difficult to enter or exit driveways. Then it becomes a community issue and you need neighbors and school administrators working together so that it does not become a them-versus-us scenario,” La Vigne said.

In some cases, it may be possible to change the timing on traffic lights to alleviate this pile-up effect. Other communities have had success in turning certain adjacent streets into one-way routes during key times of day.

While all of these structural approaches can help to ease congestion and keep people moving safely, there is a boots-on-the-ground element that cannot be overlooked. Regardless of where traffic is routed or how cars flow through the system, “you need some element of policing, whether it is literally police in uniform of teachers or parent volunteers,” says La Vigne. “You need someone whose job it is to make sure that parents and babysitters are nannies are complying with the rules.”

Adapting the physical infrastructure can help: Direct cars away from places where kids are walking; time the traffic lights to avoid traffic backups. Experts, however, say that the cultural aspects of school traffic safety are equally important. It’s about changing behaviours and introducing new mindsets, and teachers can play a vital role in making it happen.

A big reason school traffic zones are so unsafe is because people are increasingly afraid to let their kids walk or bike to school. They’re so frightened of the stranger-danger factor that they inadvertently cause a hazard themselves, by jamming the pick-up lane full of vehicles at a time when kids are running loose.

Today, some three-quarters of school-aged kids in America get to and from school by car, Streetsblog reports. Many in the field suggest that kids would be safer if there were fewer cars piling onto school grounds. The National Safe Routes to School organization for example, works with schools to encourage more walking and biking.

“People are more likely to allow their children to walk or bike if they think that is something the school encourages,” says the organization’s director Nancy Pullen-Seufert. “So the school can give recognition awards, they can do a frequent-walker punch card system and give tokens for walking a certain number of times. Or if walkers and bicyclists are dismissed first, that can become another incentive for students and families to choose that option.”

She also encourages “walking school busses,” where neighborhood kids join up and walk in tandem. “That brings a social element and it builds on something students have been doing naturally for many years. This used to be a common thing that has kind of fallen off in recent years but it can be a valuable, built-in opportunity for kids to socialize and build new friendships,” she says.

Teachers and school administrators can develop messaging about the health benefits of walking, or about the environmental benefits of carpooling. Teachers who incorporate this language into their classroom activities, especially when working with younger kids, may find that the kids themselves become advocates for change in the home.

For parents who do choose to drive, schools can be proactive in broadcasting safety messaging. “If you are dropping off a child, don’t double park, it blocks visibility for kids and other vehicles. Don’t block crosswalks. Don’t unload or load children across the street from school: Do it in the designated area,” Epstein says.

Many schools also have had success in implementing school speed zones, clearly marked stretches of road where the speed limit is significantly reduced during school hours. While such measures may be helpful, they are not a panacea.

“Simply setting a reduced speed limit in a school zone is not likely to produce the entire desired speed reduction on its own,” according to the transportation association ITE. Experts there recommend supporting that reduced-speed zone with police enforcement, automated speed cameras, doubled fines, and other measures. Some schools have met with success by adding in traffic calming measures such as speed humps or speed bumps on the approaching roads.

He also encourages schools to look at offsetting start and stop times for different grades, as a way to ease the twice-daily pileup. “At peak times you might see 100 vehicles in 15 minutes, so you [can] stagger classes by 10 or 15 minutes to reduce that peak influx,” he says. “That can be complicated depending on how the school operates, but it can [also] have a big impact.”

Ultimately, much of school traffic safety comes down to awareness. “As the parent of two teenagers I can assure you people are not looking where they should. They are walking with their heads in their phones or they are driving in a hurry,” says La Vigne.

Teachers are perhaps best situated to move the needle. They can be effective safety advocates, drawings kids’ attention to parking-lot hazards and making safe travel a high-visibility topic.

“The teachers can raise awareness,” Epstein said. “They can talk to children about how to be extra careful. They can tell the children to look for a traffic officer or a designated teacher or parent volunteer – the folks who are there to help. Teachers can remind them to look both ways before crossing, to only walk on the sidewalks, to not dart out into traffic.”

These are basic messages, perhaps, but teachers have long been at the vanguard of delivering just such fundamental wisdom so that children are able to absorb it and act on it. In the push for greater traffic safety, that role remains undiminished.