The Inclusivity Challenge: Is Canada a Just Society? 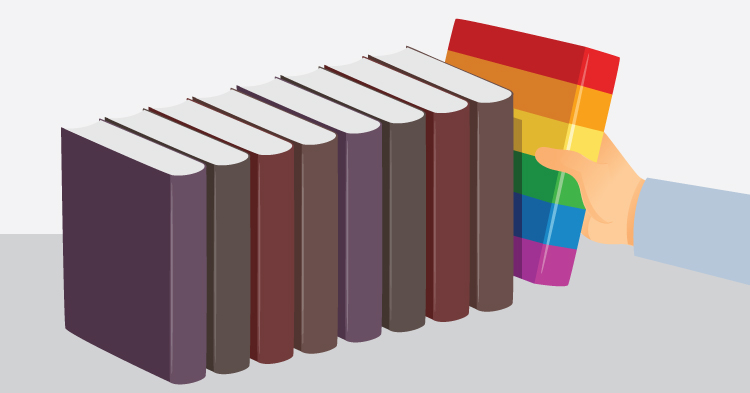 Sure Will & Grace is back on TV, but students are watching several LGBTQ+ characters on Netflix’s Riverdale and binge-watching RuPaul’s Drag Race. It seems many of your students are more comfortable with LGBTQ+ topics than you think.

This is the space for us, as educators, to continue this progress in our classrooms. Fifty years ago, homosexuality was decriminalized. It’s interesting to me that even in calling it out as “decriminalization,” we are acknowledging that it was (and in some countries still is) criminal. Homosexuality is not a crime, and should never have been one. Yet members of the LGBTQ+ community are often treated as though it still is.

My passion for this topic and teaching about LGBTQ+ history is well-founded. I’m gay. I’m a very proud, out, gay man. I’m a husband, and father too. I’m a history teacher (and have been since 2003). Yes, I am also my true and most genuinely (occasionally outrageously) gay self with my students and colleagues.

I actively teach LGBTQ+ history, and integrate it into the courses I teach. In my Grade 10 Canadian History course, we use inquiry to investigate the past and make our own decisions and interpretations about history. Students explore LGBTQ+ history the same way they explore the stories of many different Canadians in the context of our history.

Have LGBTQ+ Canadians been part of our Just Society? Pierre Trudeau’s quote inspires us to consider, and reconsider our identity as a Just Society and this is the question we’ll answer together. With each semester, my own ideas evolve, because our students are evolving.

Considering Pierre Trudeau’s words, I work with my students to construct their criteria for a Just Society. Students have also explored the experience of Canadian women (The Royal Commission on the Status of Women), Indigenous Peoples (The White Paper & Red Paper, 1969), and the diversity of People of Colour (Immigration Reforms), so tapping into this prior learning and the many different narratives in Canadian history is key. From there, our lesson on the Decriminalization of Homosexuality proceeds based on a single piece of constructed historical evidence (reproduced below) given to students. The lessons learned are rarely about the memorization of facts; I’m more interested in the big ideas and students engaging with history.

In 1969, the government of Canada passed a bill that included the decriminalization of homosexuality for consenting adults over the age of 21. Responding to pressure for change, the changes to our Criminal Code were proposed by Pierre Trudeau, who had been Canada’s Justice Minister before becoming Prime Minister in 1968.

Students are challenged to ask questions about this evidence using historical thinking concepts, and question types that are embedded into our course. We ask about cause and consequence, significance, change, and perspective. We also ask questions to compare, speculate, evaluate, and define. Student questions about history are the ones I value most.

We use these questions to springboard into deeper learning about the Decriminalization of Homosexuality and other facets of the Criminal Law Amendment Act (Bill C-150, 1969) and other related legislation passed at the time (including the legalization of the sale of contraceptives).

Pierre Trudeau said, “There’s no place for the state in the bedrooms of the nation… what’s done in private between adults doesn’t concern the Criminal Code.” Ignite student curiosity and introduce the story of Everett George Klippert, the last man to be charged and convicted with the “gross indecency” of homosexual acts under the previous Criminal Code. He was convicted in Alberta in 1960 and again in the Northwest Territories in 1967.

Klippert was described by a court-ordered psychiatrist as “incurably homosexual,” an affront to LGBTQ+ identity, and an inaccurate connection between sexual orientation and mental illness (an incongruence that I feel delayed the progress of the LGBTQ+ rights movement in the decades that followed, and even today). He was released in 1971 having served the duration of his sentence. A posthumous pardon for Mr. Klippert was announced by the government in their apology to LGBTQ+ Canadians in 2017.

Students work in groups to investigate one of the questions that they co-constructed previously. They share their findings with the class in our community circle (a consistent practice in my classroom) and are able to openly debate and deconstruct responses and independently assemble and express their own ideas about the history of the LGBTQ+ community in Canada.

Sometimes this flexibility leads us to global comparisons, other times it has us reaching further back or forward into history, and to postulate about the future. Student curiosity into this topic has never failed me. The openness of the inquiry allows students to explore history for themselves without it feeling like I’ve forced an agenda or historical interpretation upon them. I’ll happily be their compass, but I don’t need to be the map too.

Let students decide what they think about history for themselves, and the progress of inclusion will happen. New ideas form, values shift, and minds open to include LGBTQ+ individuals in our past, present, and future. When we compare historical evidence, gathered through inquiry, to the criteria we co-constructed, students become actively engaged in and responsible for their own learning.

We conclude our investigation by comparing our learning to the criteria of a Just Society we established from Pierre Trudeau’s quotation. Students can easily determine with a series of checkmarks and x’s the decision for the investigation question, “Have LGBTQ+ Canadians been part of our Just Society?” History is for them to decide. This level of respect of and for student identities, values, perspectives, and lived experiences allows every topic to be approachable, and without taboo.

If you’re concerned that the topic of sexuality will disengage students from learning (based on moral grounds, their own discomfort or sexual identities), consider the impact of not teaching an inclusive history upon those who identify (like I do) with the LGBTQ+ community. No one taught me this history. I had to learn (and continue to learn about it) on my own. I didn’t always feel connected to the history I loved. I felt outside of it, until I began to learn and see myself in it.

If you’re feeling awkward talking with students about topics relating to sexuality, I encourage you to jump over that hurdle. How? Start with a lesson (like mine) about the Decriminalization of Homosexuality in 1969. From there, you’ll see there’s much more to the story of LGBTQ+ people throughout history in Canada and the world beyond.

Integrating LGBTQ+ experiences into taught history is becoming increasingly important to my Canadian history classroom (and to our broader program and curriculum). And this is where my work is continuing to evolve.

I’m researching the experience of LGBTQ+ soldiers in Canada’s armed forces in World War II. I teach about the Lavender Purge during the Cold War. I teach about “Operation Soap,” the Toronto Bathhouse raids in 1981 (because they are local—similar events occurred across the country in the 1980s and beyond). I show my students images of Pride Parades (from the first Marches in 1970 to today).

We explore the impact of excluding sexual orientation from Section 15 of the Charter of Rights and Freedoms in 1982, and we talk about the case of Egan v. Canada in correcting that exclusion. I’m learning about the experience of transgender individuals and communities in history and Bill C-16 (2016) amending the Criminal Code and Human Rights Act to be inclusive of diverse gender expressions and identities.

I watched, from my desk in my department office at school, a live stream of the historic apology made by Prime Minister Justin Trudeau on November 28, 2017 to the LGBTQ+ community. He was speaking to me, and to my husband. He was speaking to many of my friends, my family, and to Canada. When Justin Trudeau said, “Over our history, laws and policies enacted by the government led to the legitimization of much more than inequality—they legitimized hatred and violence, and brought shame to those targeted,” I felt it.

I learned from this apology and encourage you to explore it with your students. It is, in itself, a great lesson in history. It is my intention for all students to see themselves in the history I teach. I hope that you will endeavor to include the LGBTQ+ voices of your classrooms and schools in the subjects that you teach as well. Include me, and others like me in your classroom.

Ian Duncan is a husband, father, and a proud member of the LGBTQ+ community. Teaching history since 2003, his classroom focuses on inquiry, critical thinking and community to engage students’ curiosity about the world in which we live. He enjoys Instagram, is trying to tweet, and has a complicated relationship with anything chocolate.