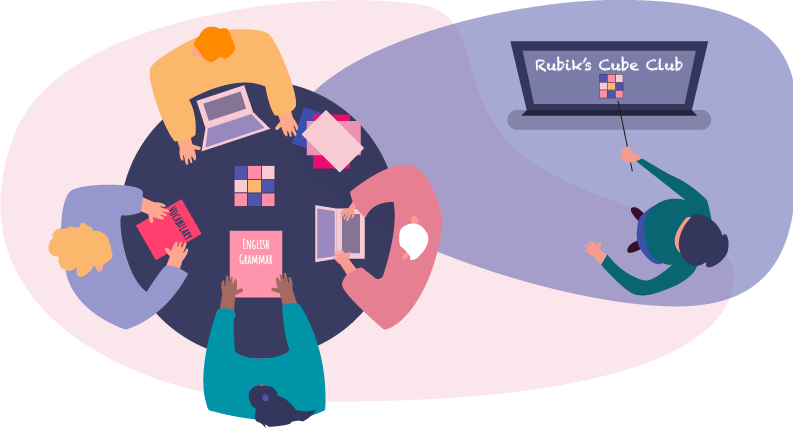 Are you interested in improving student engagement with your English Language Learner (ELL) students? Here’s an idea that I tried at my elementary school that was both fun and successful—a Rubik’s Cube club.

The idea came about during a home visit when I discovered that one of my ELL student’s older brothers is a Rubik’s Cube whiz. So I asked him if he’d like to help me organize a Rubik’s Cube club at my school. Since he was a 10th grade student looking to complete community volunteer hours, this was a win-win situation.

First I met with his mother who was concerned about his ability to keep a 6-week commitment. Then I met with my potential “teacher.” After a serious conversation, “Mr. Mike,” our Rubik’s Cube instructor was born. Upon getting my principal’s support, we decided to go for it. I started researching. How would I get the cubes? Who should I invite? How do you solve the darn thing?

I settled on inviting the ELL students from 3rd to 5th grades and wound up with a group of 15 students. We held hour-long classes once a week, for 6 weeks. I also discovered the website You CAN Do the Rubik’s Cube that has amazing resources, including a free loaner program! Now, I was armed with cubes, solution guides, videos, and lesson ideas.

I asked parents to donate snacks so that students could munch and crunch while we talked about perseverance during our warm up. “Never Give Up” became our club slogan and each week, I created a new inspirational poster with a quote for us to discuss. My personal favorite was by Thomas Edison who said, “I have not failed, I’ve just found 10,000 ways that won’t work.” It sums up my personal experience with the Rubik’s Cube perfectly.

Mr. Mike also shared his personal story, telling the kids that he was an ELL student too. He had trouble focusing and learning to solve the challenging Rubik’s Cube helped motivate him with his studies. Hearing Mr. Mike speak was so compelling for my students. All of these lessons also came in handy during ELL testing.

Over the years I’ve noticed that most of my ELL students have limited experience with playing games that involve solving puzzles, word games, or even simple board games. Developing critical thinking was one of my motivations for starting the club. So we began each session with a little friendly competition. First, I showed students the simple strategies of how to look for the edge pieces of the cube and to observe how they fit together. Next, we talked about teamwork and how to conquer the challenge together in small groups. Then, we divided up into three teams and competed to see who could solve their puzzle first. It was so fun and it really got those neurons firing.

Then it was club time. Mr. Mike sprung into action, first dazzling the students with his ability to solve the cube in minutes. Then, he showed them step-by-step how to attack the cube. I watched this young man grow into a committed leader of our club and the kids just loved him.

At times, it was a little chaotic. It took us three weeks to simply get the Promethean board working, but we were modeling perseverance at the same time! I knew I was on to something when I realized that we had perfect attendance and kids were asking me how many more days until our next class.

Other teachers started telling me that they were seeing kids bringing out their cubes before class and during recess. There was certainly a buzz around the school about the cubes. Soon, other non-ELL kids were asking me if they could join and I had to say, sorry but no. That was hard, but the ELL kids were now in an elite club of their own. Language barriers melted and friendships were made across grade levels, as kids worked together to solve the cube.

Now, we have three students in the club who can quickly and systematically solve the cube. They want to be teacher’s helpers next year, and one of my 5th graders is vowing to come back from his middle school next year to help. We are happily planning next year’s club with the new set of 50 cubes that we won in a raffle from the folks at You Can Do the Cube. To qualify, all we had to do was return all the cubes in our loaner kit solved, which we had a lot of fun doing.

Sadly, Mr. Mike couldn’t attend our last class due to an important event at his high school. I assured him that we would miss him, but that we would persevere. On that last day, however, and to my surprise, he skidded down the hall, dressed in his best clothes. As he burst into my classroom, he breathlessly exclaimed, “I couldn’t miss the last class, Mrs. Marin! I got special permission to leave early.” It was then that I realized the club helped more than just my elementary students. As for me, I’m still working on my own critical thinking and maybe someday I’ll be able to solve it too.

Sally Marin is an ELL educator at Ballenger Creek Elementary School in Frederick, Maryland. She also serves as co-president of the Frederick County Literacy Chapter.