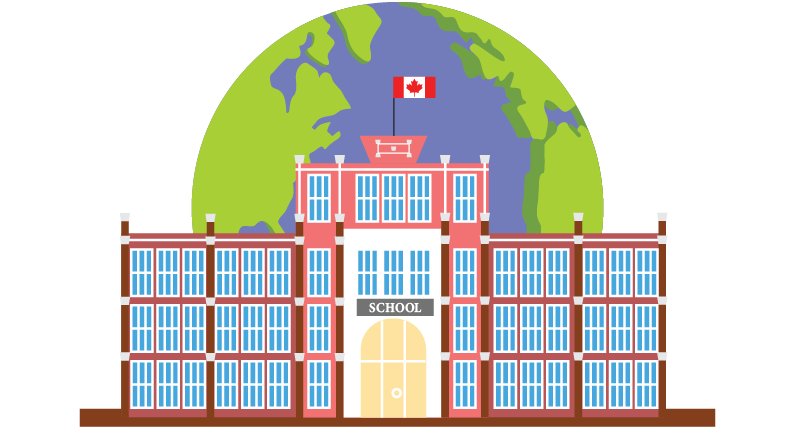 It’s not easy for teachers when students strike and urge governments to act on climate change. Depending on school policy, it can be hard for educators to know how to respond. Encouraging students to be civically informed is a good thing, but is it right to advocate they skip class? Some teachers’ unions have publicly supported the strikes; some school boards have formally declared climate emergencies. Others may seem slow to join the discussion.

The movement may have shocked some observers, but many who have spent their careers in environmental education say the seeds were planted decades ago—and it’s about time.

“Many of us feel that we’re at a tipping point,” says Hilary Inwood, environmental and sustainability education lead at the Ontario Institute for Studies in Education (OISE) at the University of Toronto. “Many of us have been working in the field for a long time and felt it was hard to get attention brought to the whole importance of environmental education. The climate strikes are fantastic because it’s youth standing up and saying, ‘This is what we need. We need to be doing this at all levels of education. We need to be doing this across all levels of society.’ And I feel we seem to be listening to them.”

Inwood helps run a program where pre-service teachers and teachers at the Toronto District School Board (TDSB) come together and have professional development together about environmental education. OISE and the TDSB have been partners for more than a decade.

Inwood sees many aspiring teachers eager to use environmental education as a way to teach their future students about skills like communication, collaboration, and critical thinking. These discussions, however, aren’t new to them; many participated in environmental education programs when they were in elementary and secondary school.

“We’ve had a couple of generations to plant the seeds for this work, and I feel like those seeds are starting to fully grow and take root,” says Inwood.

What’s happening on the streets reflects youth’s growing awareness of environmental problems ailing the planet, the atmosphere, the oceans, and all living species—including them. Administrative policy may dictate how teachers respond to strikes. Preparing teachers for responding to the needs of increasingly ecologically aware students is more complicated.

“Most students are very aware of those issues,” says Marie Tremblay, senior education advisor for the Alberta Council on Environmental Education and a former classroom teacher. “Because we live in a digital age, students typically spend more time on digital screens than they do outside. So, there’s a bit of a disconnect: not a lot of students have a lot of first-hand experience with the environment and with nature.”

Students do have lots of exposure to quick, extreme temperature changes, and highly charged political discussions. If teachers are going to help them navigate through discourse concerning climate change, they’ll need to dig deep.

High school social studies teachers know they have to discuss controversial and difficult subjects with their students. Cathryn van Kessel, however, who has spent nearly a decade teaching high school students, has been unable to help them fully articulate why certain subjects made them defensive or angry—and she was also a debate coach. The ability to respectfully discuss challenging topics is crucial when helping students respond to climate change.

“I feel with climate change, it’s become as contentious as issues that are long known to be super- controversial: abortion, capital punishment, euthanasia,” says van Kessel who now is a teacher in the faculty of education at the University of Alberta in Edmonton. “I feel recently, climate change is on par (with other controversial subjects).”

A few years before van Kessel left classroom teaching in 2015, she discovered trauma management theory (TMT). The theory focuses on humans’ anxiety about death, and their beliefs about what happens to them after they die. These beliefs are informed by worldviews. When people’s worldviews are threatened, they become defensive.

Climate catastrophes remind people of their own mortality and death, and that makes them feel threatened, says van Kessel. Those feelings get intensified when they encounter people who have strong values that differ from their own.

Students need to learn how to respond to differing opinions if they’re going to thrive. Van Kessel suggests that teachers model this explicitly for their students. If a teacher feels threatened by a student’s comment, they should tell students why they’re feeling uncomfortable. Then, they should show the student how they’re going to respond to the discomfort—by taking a deep breath, for example—and that they’re going to continue to have a respectful conversation. Using humour appropriately to lighten the mood can help, as well as discussing good mental health and self-care strategies.

For students at Earnscliffe Senior Public School in Brampton, ON, learning about climate change means learning programming. Students program their Micro:bits to water a vertical garden made from recycled pop cans. “It’s been amazing,” says Lisa Kao, the teacher-librarian.

Libraries are a perfect place to teach students about climate change. “A library touches all classes and all students. I can impact every single student,” she says. “I have a lot of time to experiment with my teaching than other teachers do because I don’t have the confines on my time.”

Kao used materials developed by InkSmith, a company that produces innovative education technology. The company’s teamed up with Kids Code Jeunesse, a Canadian non-profit that teaches students about coding and Artificial Intelligence, to produce kits with activities designed to teach students about how to respond to the United Nations’ Global Goals for Sustainable Development. The kits help students learn about climate change, while also teaching them about how to design solutions to problems.

“A lot of the students have an understanding of the problems and what is going on, but there is a lack of knowledge about how they can solve it,” says Michael Leonard, experimental learning and innovation lead at the Waterloo Catholic District School Board in Ontario. These lessons also help focus students’ attention on solutions to problems, which helps keep some of the anxiety at bay.

“Students are tremendously engaged in an activity when we’re leveraging technology. And they see that technology can be used as a positive thing that solves problems, and we’re showing them that these things are going,” he says.

Connecting it to People

Educators who want to address climate change “need to be willing to go to places that maybe (they) haven’t explored,” says Jonathan Dyck, president of the Environmental Educators’ Provincial Specialist Association in British Columbia. This may include listening to people’s voices who aren’t always heard in climate change discussions.

Michael Ross, a teacher at Okanagan Mission Secondary School in Kelowna, BC, views climate change as a social justice concern. It demonstrates—and exacerbates—existing inequalities in society. “A lot of people that didn’t really cause the problem— geographically and generationally—they are the ones who are feeling the consequences,” he says. Indigenous communities may be disproportionately influenced by resource extraction; youth live with the consequences of older generations’ actions that have hurt the environment. If teachers want to speak effectively, they need to listen to these communities.

Dyck says Indigenous principles in curriculum have helped him incorporate discussions about climate change into his lessons. He learns from Indigenous elders, and also uses Indigenous practices in his classroom. Talking circles give all students an opportunity to speak and learn from each other. “(The circle) makes it democratic and prevents just one or two people monopolizing the conversation,” he says. It teaches students to decipher between facts and opinions, and ensures they’re exposed to views different from their own. “You might still stick with your previous opinion,” he says, “but it will be better informed.”

Ross says his goal as a teacher is to “create a community around a campfire.” This happens literally on outdoor education trips. In his classroom, he has students participate in a talking circle every day where they learn about each other’s successes and problems. “When you feel like you belong, you feel stronger,” he says. “When you feel stronger, you build trust. When you have trust, you can go further and go faster.”

That’s particularly true for students who are often excluded from communities. When Lillie Craw’s class at Fir Ridge, an alternative public high school in the David Douglas School District in Portland, OR, tuned in to watch local climate strikes, they quickly discovered they couldn’t see any students like them: there were no students with visible disabilities involved. This really “shocked” her students, she says.

Students in special education classes often don’t learn as much about climate change, says Craw. In a city where vegan lifestyles are prevalent, her students often associated climate change with throwing away garbage, and not as quickly with greenhouse gas or carbon emissions. They were also learning how people with disabilities are particularly vulnerable during natural disasters.

Craw has used comics in her teaching for years. She and her class made a comic book to explain climate change to younger students who also have disabilities. The books introduce students to how rising sea levels endanger different species. Craw’s class met with younger students and read them the comic books.

“They saw themselves not just as self-advocates, but as advocates for other students with disabilities,” she says.

Climate change education is rife with topics and discussions that can provoke anxiety. But it also creates opportunities for students to take action and develop empathy and leadership.

“It’s almost as if we’re there to help them and be resources,” says Dyck. “One of our jobs is to get out of the way and push them to advocate for the changes they need.”