STEM vs. STEAM: The Importance of Creativity 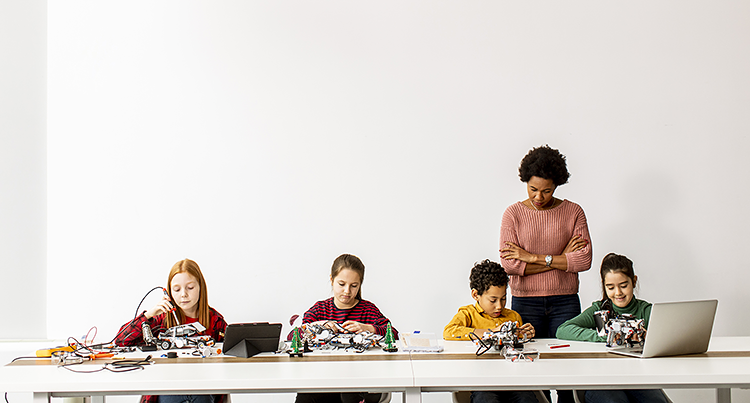 STEM—science, technology, engineering, and mathematics—once a simple acronym, it has now evolved into one of the buzzwords that instantly catches the attention of most educators. However, I’m not an educator. I’m a middle school student in New Jersey and, for me, those four letters represent my future.

As the only child of two Indian immigrants who were both software engineers, my parents worked hard every day to make sure I had opportunities that they didn’t. They pressed upon me the importance of education and enrolled me in a great, innovative school.

Possibly one of my brightest memories was in that school’s newly constructed STEM lab. We were a giggling group of fifth graders surrounded by 3D printers and hot glue guns—a scenario that could only end in chaos. But having the freedom to make whatever we wanted, how ever we wanted, was something that invigorated our creativity. My friends and I had so much fun building popsicle stick catapults, egg drop sacks, and cardboard bridges.

Going into middle school, I was eager to take every opportunity to continue the golden moments that I experienced in the STEM lab. I immediately joined my school’s STEM club, expecting the room to be overflowing with curious young minds. Instead, I was greeted by mostly empty chairs. Out of our school of 200+ students, less than 10 had decided to join.

In spite of our small group, we were able to participate in a series of math and science competitions. It was clear from the beginning that all the problems were formatted as written examinations. The contests, which often went on for hours, required us to sit in a room in silence while we worked through the exam sheet. I was initially surprised to realize that the majority of the problems were heavily based on memorization of a textbook, as opposed to requiring creativity and problem-solving skills.

It may have been dull to some students, but I guess I inherited my parents’ love of science and found myself enjoying the work. It was all about understanding a deeper concept that unlocked the world around me, even if reaching that understanding meant spending hours with my nose buried in a book. Unfortunately, my classmates did not share the same opinion. My attempts to bring a few peers into the club ultimately failed, with several of them shocked that I would want to spend hours sitting in a room looking at math problems.

It’s a shame that the written tests do not have the same charm as the hands-on approach that was supported in the STEM lab. I’ve noticed that as the curriculum becomes more advanced in higher grades, there tends to be a decrease in creative opportunities, which I think leads a lot of students away from STEM. And that’s too bad because I have always loved the subject, and would like to see more of my friends become interested in it (especially female friends—we need more girls in STEM!)

I’m only still a student, but I know the importance and value of STEM education. I hope teachers and schools can rethink the way they teach it. Less tests, more building, more experimenting, more creativity, and more fun. In other words: STEAM. I believe a small inclusion of the arts can help this subject grow in popularity, and ultimately, create the future. So teachers, please, consider applying STEAM ideas in your classrooms, so that more girls like me have the opportunity to benefit from them, and, ultimately, so we can better prepare ourselves for the world outside of the classroom.

Sriya Tallapragada is a middle school student who is passionate about the intersection between STEM, female empowerment, and writing.