Morbid Fascination in the Classroom: Engaging or Inappropriate? 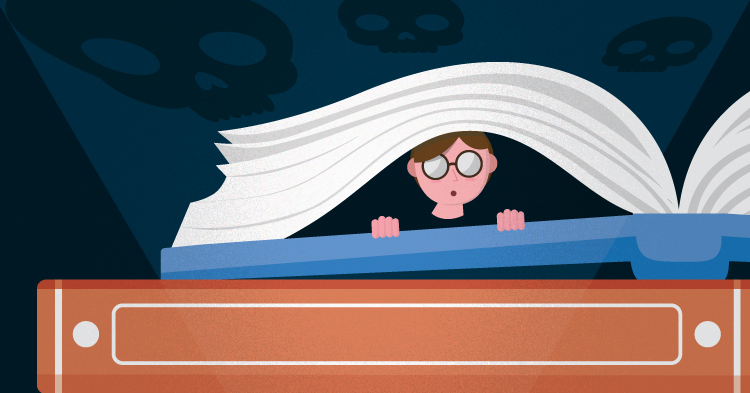 Serial killer documentaries, true crime podcasts, and dark tourism are just the tip of the iceberg when it comes to the recent proliferation of the morbid entertainment industry. While interest in the morbid has arguably always been around, the technological era has made this interest more accessible than ever. Real life horror is right there at our fingertips and many of those phones live in the hands of our students.

Of course, the new generation is not the culprit here. There are records dating back to the Jack the Ripper killings in 1888 that document locals touring the murder sites to feed their own interest. That same enthrallment can be seen among tourists today in Milwaukee, WI, as they stroll on a Jeffrey Dahmer tour. So, while our students’ morbid fascination is not unusual, their access to it is desensitizing.

Beyond true crime, I have found that my students are generally morbidly curious. When a character dies in the novel we are reading, engagement increases. When we discuss dark history, like the Holocaust or the Salem Witch Trials, hands raise. Students often display a morbid curiosity that I feel I cannot ignore, but can I lean into it? As teachers, we strive for engagement and are taught to play into student interest, but I have to wonder if it’s wrong in this case. Should I use someone else’s misfortunes or trauma as a tool to increase student participation? Is using morbid fascination in the classroom engaging or inappropriate?

In my opinion, there can be a place for it; it should be treated, however, as a jumping-off point for more meaningful conversations about the human experience. Morbid fascination without social commentary leads only to desensitization, with students starting to see death and tragedy as foreign and separate from their own experience. In reality, by studying dark history and moral tragedy, students should be able to explore the connectedness of emotions such as loss and trauma. So, how do teachers utilize our students’ morbid fascination in a way that engages them, but also humanizes them?

A teacher should never discount the power of hooking students into a lesson, and morbid fascination can be an incredibly beneficial hook. For example, when teaching the Salem Witch Trials, students are drawn by the idea of black magic and witches being burned at the stake. Teachers can use that interest to engage students in the content. However, it’s necessary to then expose the disassociation students make to distance themselves from historical or literary violence. The thought of being burned alive should make students shudder, not get them excited. We want students to move from being morbidly curious to feeling empathy for the innocent victims.

One technique that I have found to be beneficial for bridging the gap between disassociation and empathy is using imaginative rehearsal. Putting students in the shoes of a literary character or a historical figure can eliminate the distance that morbid fascination often creates. But it is important to create boundaries for imaginative rehearsal in order to avoid commercializing trauma.

For example, students shouldn’t be asked to stand in cramped quarters to mimic the experience of being in a box car during the Holocaust. Likewise, students should not be asked to reenact slave auctions to understand the experience of buying and selling humans (yes, this really happens). The activities in both scenarios do not ask students to authentically engage from an emotional perspective. Any opportunity to build empathy is lost as students are provided an impersonal experience of an extremely traumatic event.

Students need to emotionally engage with the content. Having them write from the perspective of the sibling of an accused witch during the Salem Witch Trials, for example, can be a meaningful use of imaginative rehearsal. This activity doesn’t ask students to imagine an unimaginable experience and then simply leave. Students must negotiate the turbulent emotions of loss, confusion, and trauma in order to complete the assignment. Not only are these emotions relatable, but what was simply a morbid fascination with witches has now become an authentic human connection spanning over 300 years.

Similarly, in a social studies class, students will learn about World War II and the Holocaust. As teachers, we often approach “heavy” lessons with hesitation. Can our students handle it? Will they be mature and respectful when we cover serious and traumatic topics? When students distance themselves emotionally, humor often becomes their coping mechanism and for teachers this can be a classroom nightmare when discussing heavy topics.

Having students read an emotionally-relatable primary text, such as a collection of letters written by young people during the Holocaust, forces them to look in the mirror and see themselves in individuals living decades before they were even born. When students put themselves in the shoes of a Holocaust victim, they must personally engage with the content. For teachers this means the worry of, “Will my students be mature enough?” is greatly reduced and class runs smoother for everyone. Students are able to learn about the topics they are morbidly fascinated by and teachers don’t have to worry about behavior issues going awry.

Using morbid fascination in the classroom is not only a great hook to get students to start making meaningful and authentic emotional connections, it also provides an opportunity for teachers to dispel popular misconceptions. For instance, one of today’s most famous dark tourist destinations is Alcatraz. Over one million people flock there each year to hear about the grotesque deaths in the prison and to perhaps catch a glimpse of the ghost of a former inmate. Once you’re on the tour, however, you learn about the natural history of the island and even discuss the Indigenous Occupation of Alcatraz. Those who were once only morbidly fascinated with Alcatraz leave the tour with a legitimate knowledge of the subject beyond just death and hauntings.

Teachers can accomplish the same in the classroom. Many students come ready to read about witches burning at the stake when we start The Crucible. Their initial morbid interest can then be used to dispel myths, like the fact that no witches were actually burned at the stake in Salem. This initial myth may have ignited students’ curiosity, but it then becomes an entry into more meaningful conversations regarding reality, innocence, and truth.

Teachers must realize that if our students are interested in something, they are going to learn about it. Unfortunately, students often seek the knowledge of YouTubers or those less qualified to quell their curiosity. Teachers are experts and students should trust our expertise. Therefore, teachers should feel confident in engaging students’ morbid fascination, because we know that relevant content is essential in the classroom and we are just the experts to teach it.

Overall, morbid fascination can be a great teaching tool when used to initially get students interested in a topic, but must eventually lead to more meaningful conversations about the human experience in order to restore humanity to the morbid.

Kaila Ward is an 11th and 12th grade ELA teacher at Greeley Central High School. Through her work with diverse student populations, she is an advocate for equity in the classroom and diversity in school curriculum.