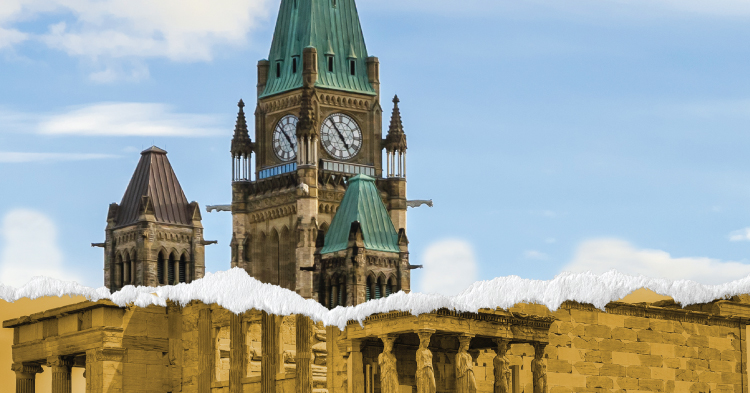 What it means to be a citizen has changed dramatically since the concept first appeared in ancient Greece.

Ask several people what it means to be a citizen, and you’ll likely hear a variety of answers. At its simplest, most people are citizens of the town or city they live in, with the same social, cultural, and civil rights and legal protections offered all residents of Canada (regardless of status) under the Canadian Charter of Rights and Freedoms.

National citizenship grants certain civic rights that make it more valuable than residency, such as the ability to vote in elections and run for political office. Because of this, the Canadian government places restrictions around who has official citizenship status, who can apply for it, and how citizenship is effected through the naturalization process. Becoming a citizen is often an aspirational goal for newcomers to Canada, and immigrants are encouraged to apply for citizenship so they may fully participate in Canadian society.

That would have been a strange concept to citizens of ancient Athens—one of the 1,000-plus city-states, or “poleis,” spread across what we now call Greece during the fifth century BCE—where the idea of democratic decision-making and official citizenship first appeared. Citizens participated directly in running the polis. It was never considered a status that could be transferred to newcomers, and instead was used to restrict the economic, legal, and political power of non-citizens.

Life in the Polis

Fifth century BCE was a tumultuous time in the Greek world, marked by wars, political uprisings, and shifting demographics. Literature, science, philosophy, and political ideas were rapidly changing society, especially in Athens, the largest polis. Athens’ rulers had always defined who “belonged” in the city, although the definition became more limited over time. At its core was a belief in autochthony—that Athenians were born from the earth as direct descendants of Erichthonius, the first king of Attica and Athens. That meant foreign-born residents of the polis would never be considered true Athenians.

Athens, at its height, was an incredibly multicultural place, and people flocked to it as merchants, craftsmen, teachers, and philosophers. “But they could never become citizens,” says Victoria Wohl, professor and chair of Classics at the University of Toronto. “These are the ‘metics,’ the resident aliens, and often they lived generations in Athens.” Slaves captured during wars were also a significant portion of Athens’ population, and together with metics comprised roughly 75 percent of the city during this time.

As Athens grew to between 250,000 and 300,000 people, the right for a person to call themselves an Athenian citizen became increasingly coveted. “The most definitive legal definition came in 451 BCE, under the regime of the statesman Pericles, who tightened up the requirements for citizenship,” Wohl explains. “He defined citizenship as the natural-born child of two Athenian parents. Before that citizenship was much more open—you had to have an Athenian father, but your mother could be foreign born.”

Wohl says that following the Persian Wars, Athens began to rebuild its fleet, mercantile power, and imperial ambitions. “One theory is that citizenship is closely tied to empire, both because there is more wealth to be distributed—and now it matters who is going to get a share in that wealth—but also because an empire entails new people coming in and lots of engagement with non-Athenians,” she continues. “So, defining the barriers between who is an Athenian and who is not becomes more important. In fact, at least twice toward the end of the fifth century, there were reviews of the citizen rolls in each political district of Athens, and people were kicked out.”

The Rights of Athenians

While metics and slaves were crucial to the Athenian economy, political life was restricted to citizens. “Rights and duties went really closely hand-in-hand for male citizens,” says Wohl, adding that “the primary rights, and in fact the duties, of a citizen were to judge and deliberate, so to serve in the political institutions of the democracy and speak in the assembly on issues that matter to the city.” Debates and voting took place in public assemblies open to all male citizens, who drew lots to fill political offices and serve on juries to deliberate trials without a judge.

“Our conception of democracy in ancient Athens is that it was much more direct and participatory,” explains Keith Cherry, post-doctoral fellow at the University of Alberta. “The idea of being a citizen was that you were directly involved in the governing of your polis, and in the decisions that affected you. So it was not a representative democracy, it was a system based around being directly involved in decision-making yourself.”

Male citizens were expected to serve in the military, but so were metics, who were unable to contribute to political or economic decisions affecting Athens. “So, you can imagine the frustration of these wealthy metics who are contributing to the city, paying taxes, serving in the military, and yet could never rise in the political arena,” says Wohl.

Although Athenian women didn’t have traditional citizenship rights like Athenian men, they still had other rights that distinguished or elevated them in the eyes of the law from non-Athenian women. Wohl says, “…they didn’t have political rights, they couldn’t represent themselves in court, or represent themselves in economic dealings. [But] women [still] had a kind of citizenship status… it was manifested very differently.”

Wohl explains that female citizens instead had the right to participate in religious functions on behalf of the city in ways that non-Athenian women couldn’t. “That was an important right, and ideologically very central to the Athenians, because maintaining a good relationship with the gods was central to the prosperity of the city,” she says. “That meant, for example, participating in parades for the goddess Athena, and public sacrifices for the gods and goddesses. Those political rituals were vital to keeping the city healthy.”

To not exercise your rights and duties as a citizen was more than frowned upon. “An Athenian citizen who didn’t exercise his rights was considered less than a full human being,” says Wohl. “And in fact, the Athenian word for a private person who doesn’t participate in politics is idiōtēs, which is where we get the word idiot. And it could always be used against you by your enemies.”

The 1947 Canadian Citizenship Act sought to create a new national identity for Canadians, while attempting to define the parameters of citizenship during a time of mass immigration to the country. Although the Act has gone through many changes, it still outlines who can obtain citizenship and how, as well as the rights and duties of citizens.

Individuals born in Canada have citizenship, as do foreign-born children of Canadian citizens. Immigrants can retain official citizenship status of another country while applying to become a permanent resident of Canada, and then a naturalized Canadian citizen. That involves being able to speak English or French to a certain proficiency, meeting residency requirements, and passing a citizenship test that highlights Canadian history, ideals, and institutions.

Only citizens can vote in elections, hold high-level security jobs, and apply for a Canadian passport. At the same time, all residents have certain duties to the state, including obeying the laws and paying taxes, while citizens have the added duty of sitting on juries when called.

Citizens and the State

Concepts of citizenship status, including the idea that it can be granted, changed with the rise of the modern democratic state. Today, mechanisms of the state—the government ministries, the legislature, and the courts—are staffed by paid professionals who we trust to oversee day-to-day decision-making on our behalf.

Issues of national concern are debated between politicians and in the media, with little citizen input until elections are held (although social media has already shown its power to sway public opinion). We also rely on the state to protect us by maintaining law and order, as well as to provide healthcare, public infrastructure, education, community services, and much more.

“With the advent of the modern bureaucratic state and the capitalist economy, we started developing representative institutions rather than participatory democratic institutions. And so citizenship started to transform,” says Cherry.

“Today it’s not about actively making decisions anymore,” he continues. “It’s about the right to choose the people who make your decisions for you. So citizenship, in the political sense at least, appears mostly in our ability to vote for who those people should be, which is really quite a profound shift in how we think about politics in our society and the role of the ordinary person in it. It really affects the character of our democracies, and the character of citizenship—it becomes a much less intimate part of our lives. It’s something we have to think about every few years when we go to the polls, but it’s not a daily fixture of existence the way it would have been in Athens.”

Civil duties that are not necessarily political, but which Cherry says add texture to our political community, have also become more removed for many citizens. “These are all the things that we do to pull our society together that don’t depend on the state, like attending protests and engaging in direct action, but part of the transition towards a thinner, less substantive vision of citizenship has been the de-emphasizing of those social aspects, of the obligations we have to actually be directly involved in our society.”

Cherry adds that the thinner our conceptions of democracy get, the easier it is to hollow out those processes beyond what we’ve consented to, which is how authoritarian states arise. “Thus, the more robust our conceptions of citizenship, the more people understand that they have a personal responsibility for the society that they’re part of, the more difficult potential authoritarians find it to make those moves without opposition.”

Carolyn Cooper is a freelance writer and editor living in Kawartha Lakes, ON.