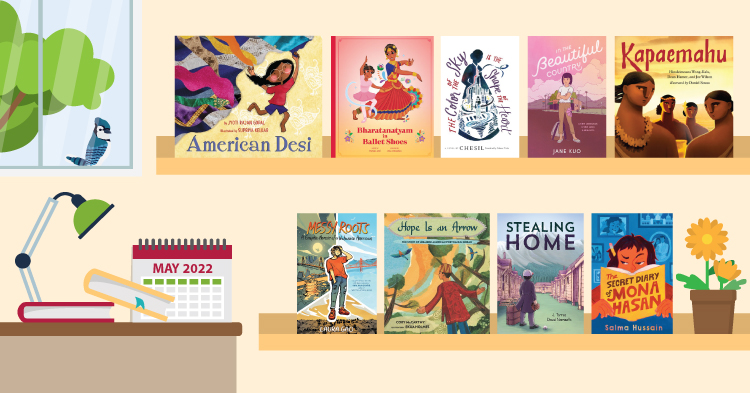 Each May, Asian Heritage Month is celebrated in Canada, and Asian American and Pacific Islander Heritage Month is observed in the United States. For both countries, this is a time to recognize the culture and achievements of people of Asian and Pacific descent, and honour their diverse stories. Several of those stories are reflected here, in this wide selection of books that shine a light on the experiences and histories of Asian and Pacific Islander communities and individuals.

As seen through the eyes of a young girl who is trying to figure out where she fits in, this book offers a powerful tribute to first and second generation Indian American children, while also celebrating the joys of being bicultural.

A girl named Paro explores how her cultural identity intersects with a love of dancing in this stunning picture book. The story echoes the real-life friendship between Bharatanatyam dance icon Rukmini Devi Arundale and Anna Pavlova, the Russian prima ballerina.

The Color of the Sky is the Shape of the Heart by Chesil, translated by Takami Nieda
Soho Teen (April 2022)
Grade Level: 7-12

This newly-translated YA novel tells the story of teenager Ginny Park who has been fighting prejudice her entire life. Having grown up Zainichi (an ethnic Korean born in homogenous Japan), she continues her personal battles in her current home in Oregon, where she is about to be expelled from school—again.

In this breathtaking novel in verse, a young Taiwanese immigrant is confronted with the reality that life in America is nothing like she imagined it would be. Inspired by the author’s own experiences, this lyrical story explores themes of courage, resilience, and the struggle to make a home for yourself in a new place.

Kapaemahu tells the story of an Indigenous Hawaiian legend involving four mysterious stones on Waikiki Beach, and how the dual male and female spirits within them bring healing gifts to Hawaii. (Based on the animated short film.)

Comic artist Laura Gao illustrates her coming-of-age story as a daughter of Chinese immigrants in this compelling graphic memoir. She also shares her experiences as a Wuhanese American during the COVID-19 pandemic.

When Kahlil Gibran was forced to flee his homeland at the turn of the twentieth century, he was torn between his two identities. Could he be both Gibran Khalil Gibran, the Lebanese boy, and Arab American Kahlil Gibran? This beautifully-illustrated picture book dives into the history of the third-best-selling poet of all time and the inspiration behind his famous poetry collection, The Prophet. Don’t miss the accompanying Teacher’s Guide!

This middle-grade novel focuses on ten-year-old Knox Wei-Evan, whose family has recently moved from Hong Kong to California in an effort to escape the coronavirus. As anti-Asian racism increases because of the pandemic, Knox struggles to fit in. Will he be able to stand up to the hate and find his place in this new country?

J. Torres weaves historical facts with fictional characters in this gripping graphic novel, which tells the story of the internment of Japanese Canadians during World War II through the eyes of a baseball-loving boy named Sandy Saito.

Told over the course of a year through the diary of Mona Hasan, a Muslim girl growing up in Dubai, this middle-grade book follows Mona and her family as they immigrate to Canada in 1991, after the beginning of the first Gulf War.