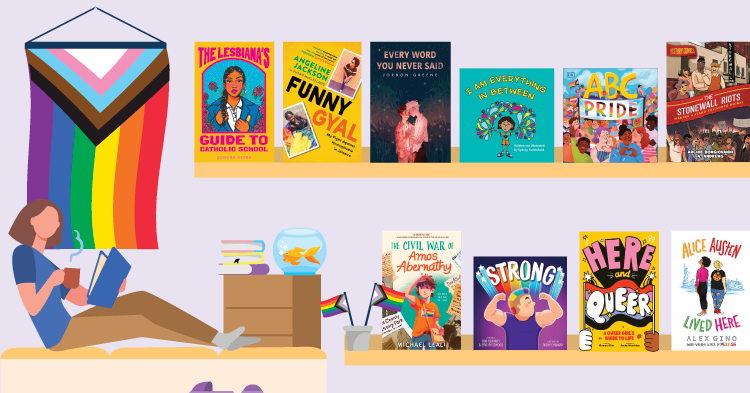 June is unofficially regarded as Pride Month by most of the LGBTQ+ community. It is a way to pay homage to the 1969 Stonewall Riots, and to serve as a reminder that since the beginning, Pride has been a form of protest against injustice. Today, it is also a time to recognize the contributions of the queer community and to commemorate the history of the LGBTQ+ social movement. Pride is an opportunity for the community to come together and celebrate as well. Here are 10 books to share with students in honour of Pride Month.

Young readers can learn all about the world of Pride with the help of this fun book. ABC Pride also explains some important LGBTQ+ terms and concepts in easy, child-friendly ways.

This middle-grade book invites readers to think about who writes history and whose stories get to be told. Non-binary seventh grader Sam is excited to write their history project on Alice Austen, a lesbian photographer and historical figure of Staten Island. As Sam’s research takes them deeper into their neighbourhood’s past, Sam begins to unearth a queer history richer than they’d ever imagined.

Follow along with history-buff Amos Abernathy as he tries to find evidence of LGBTQ+ people who lived in Illinois during the 19th century. When his search turns up a Civil War soldier who might have identified as trans today, Amos has to figure out how to share the soldier’s story with his 21st century town. A story he’s not sure everyone wants to hear…

Ever since he came out over the summer, Jacob Walters has been suffering the wrath of his father, but he won’t let it hold him back. So when nonverbal transfer student Skylar Gray (who Jacob might have a bit of a crush on) causes a stir by wearing a skirt to school—and the school proposes a sexist new dress code in response—Jacob decides it’s time to take a stand.

In this inspiring memoir, LGBTQ+ human rights activist Angeline Jackson recounts her experiences of standing up against Jamaica’s oppression of queer youth. Funny Gyal traces back through Angeline’s childhood, her sexual and spiritual awakening as a teenager, her traumatic experiences of “corrective rape” and conversion therapy, and ultimately how she found the courage to challenge violence against LGBTQ+ people and demand justice.

This friendly, inclusive guide is filled with stories and advice to help girls explore and celebrate their own queer identities. Here and Queer is written by YouTuber Rowan Ellis, who uses her own personal experience to guide readers through coming out, dealing with bullies, building healthy relationships, and celebrating Pride. It also includes a glossary of terms and guest essays from other LGBTQ+ contributors.

I Am Everything in Between by Sydney Sunderland
Rebel Mountain Press (March 2022)
Grade Level: K–3

I Am Everything in Between initially began as a high school project for eighteen-year-old Sydney Sunderland. But after realizing how passionate she felt about the topic, Sunderland decided to submit it for publication. The book is a celebration of children who might not fit stereotypical gender ideals. It offers a positive message that “it’s okay to feel like a girl, or a boy, or everything in between!”

After being outed at her previous school, sixteen-year-old Yamilet Flores wants to keep her sexual orientation private. But it’s hard to fake being straight when she’s crushing on the only openly queer girl at her new school. Readers will love this debut YA novel as they watch Yami learn to navigate her mostly white, very rich Catholic school and celebrate her identity as a queer Mexican American.

The Stonewall Riots: Making a Stand for LGBTQ Rights by Archie Bongiovanni, illustrated by A. Andrews
First Second (May 2022)
Grade Level: 4–8

In this graphic novel, three teenagers are magically transported from modern day back to the Stonewall Inn during the summer of 1969. As they experience the Stonewall Riots firsthand, the three friends meet iconic activists like Marsha P. Johnson and Sylvia Rivera.

Strong tells the true story of Rob Kearney, the world’s first openly gay professional strongman. Ever since he was a kid, Rob dreamt of becoming the strongest man in the world. But he also wore bright leggings and unicorn T-shirts, and dyed his hair all the colours of the rainbow! Even though he felt like he didn’t fit in, here’s how was Rob able to accept himself and become the champion he always wanted to be.