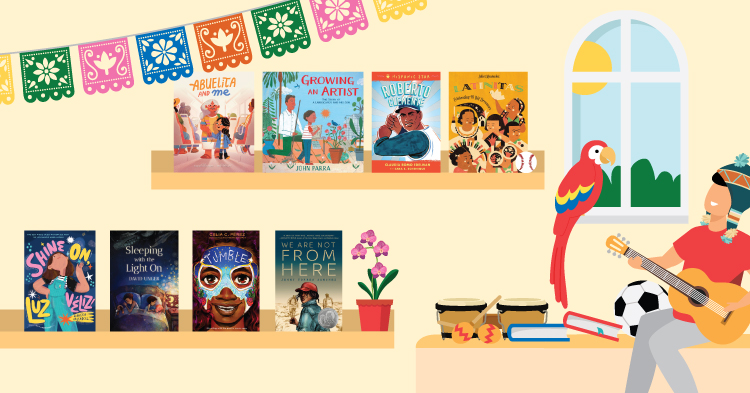 Latin American Heritage Month is right around the corner for Canadians (October), along with National Hispanic Heritage Month in America (September 15 to October 15). Teachers and librarians can take these opportunities to introduce books that are created by authors and illustrators of Latin American origin, and which reflect the stories and identities of the Latin American community. Read on to find wonderful literary works that contain themes of influential figures and powerful immigrant journeys, along with narratives that promote diversity and celebrate Latin American experiences.

An empowering story about confronting racism, as told through the eyes of a little girl, and how she and her grandma choose to overcome it, together. The book can be used as a lead-in to discussions of empathy and compassion, while offering comfort for children who may be coping with racism in their own lives. (Additional resources include a lesson plan.)

This heartwarming picture book introduces a young boy who discovers his inner artist while accompanying his landscape architect father to work for the first time. The story offers teachable moments about the value of creativity, hard work, and taking pride in a job well done. (Additional resources include a teaching guide.)

This book depicts the true story of Latin American icon Roberto Clemente—the first Puerto Rican player to be inducted into the Baseball Hall of Fame—who not only broke down barriers for Latinx athletes, but also gained much acclaim as a dedicated philanthropist.

Meet 40 trailblazing Latinas and learn about the childhood events and influences that shaped their lives. Featuring biographies of women from all across Latin America and the U.S., Latinitas will encourage young readers to follow their passions and pave their own paths to success.

When Luz injures her knee, her life as a soccer star is over, along with the bond she once shared with her father. Determined to find a way to shine again, she finds solace in a robotics club and decides to reinvent herself as a STEM superstar. (Additional resources include a discussion guide.)

Life is for good for Davico and his family in Guatemala City—until a civil war forces them to flee their home and seek refuge in the United States. An endearing portrait of familial resilience, war, and loss, this book brings awareness to communities around the world that are torn apart by violence.

Twelve-year-old Adela learns the missing pieces of her origin story when she meets her estranged biological father—a lucha libre (wrestling) legend in New Mexico— and his eccentric luchador family, in this coming-of-age novel that celebrates finding yourself and the true meaning of family.

We Are Not from Here by Jenny Torres Sanchez
Viking Books for Young Readers (May 2020)
Grade Level: 9–12

Escaping the dangers of their homeland in Central America, three teens embark on a harrowing journey through Mexico to the United States. Inspired by current events, this critically-acclaimed novel shines a spotlight on the sacrifices and resilience of countless migrants who risk their lives to cross the border.