Teaching Both Official Languages in Quebec 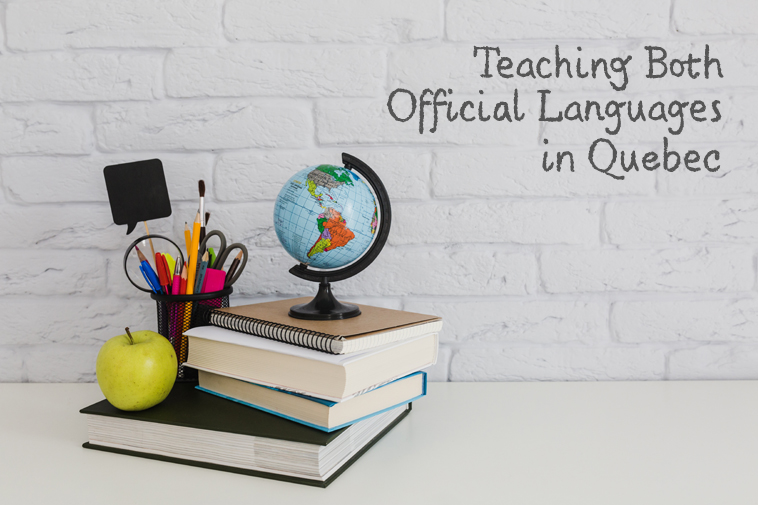 In the province of Quebec, the experience of learning a new language is shared by many as they either acquire French or English as a second language. As a Francophone, I can attest to the challenges common to all second language learners.

The difficulty of reproducing sound and deciphering oral or written content in a native tongue is difficult enough, let alone in a second language. For Anglophones, they have a tough time getting their mouths around the R’s and the U’s, EU’s or OU’s in French. For Francophones, they have just as difficult a time in English, insisting on pronouncing the silent L parked before the D in would and could. And there’s also the TH’s that are not only pronounced two ways, but leave a feeling of having a hair stuck to one’s tongue. In French the S’s are always silent, in English they are not. In English some GH’s sound like an F (as in laugh) and in French the sound È is written many different ways (ais-aient-è-ê-es).

As you can imagine, the experience of learning a new language can begin to feel like learning a form of gibberish from Mars. It is not surprising then, to find so many cases of dyslexia in both the French and English languages, what with all the exceptions, or all those sounds that don’t quite match their visual components. Consequently, a linguistic anxiety amongst learners develops.

Not A Magic Recipe

There are as many methods to teach a language, as there are schools of thought. Some swear that the teacher must never utter a single word of the native language while others rely on it excessively in order to save time or because their own knowledge is lacking. (I’ve come across French and English teachers who could barely speak the language they were teaching.)

There is no such thing as a magic recipe to learning, regardless of the subject. If a component is missing from the equation for learning, such as attention, study skills, rigor, curiosity, memory and so on, learning will not be systematic, especially if motivation is lacking.

Variety is the key to motivating students. For example, giving dictation is an effective method to train the ear to sound and spelling, but may become wearisome if it is the only method used, especially if the student doesn’t understand a single word.

Explaining a grammatical concept in the student’s native tongue is an effective way of securing comprehension if, of course, the native tongue is well learned. If a student has never understood the concept of verbs in his or her own language, he or she will have just as much trouble, if not more, doing so in the second language.

It is essential for a teacher to be on the lookout for a student’s involvement; some pretend to understand to avoid humiliation, others have stopped listening all together or rely on a classmate. There are as many obstacles to learning as there are methods of teaching or types of learners.

Listening is a key component to language learning, just as with music. Learning a second language is like learning music; if you never practice playing your instrument, you will never play. And not everyone is talented enough to become a musician! The acquisition of a second language is a gradual process, and requires an infinite amount of patience and indulgence. One should be allowed to make mistakes without fear of the firing squad.

A Second Language is not a Constraint, but an Enrichment

Teaching a second language in Quebec can be a challenging task because of the political attitude of language learners in Quebec: perceiving the “other” language as the enemy’s. However, speaking another language, be it French or English, does not threaten one’s cultural identity. On the contrary, it adds to it. It is a self-extension and not self-extinction, but it is important for a teacher of a second language not to display imperialistic behavior. Motivation is not propelled by dictatorship. To be inspired, one requires respect.

Language is not just a cumulative amount of vocabulary; it’s a world on its own. The English drink like fish, the French like holes. In English it rains cats and dogs (poor things), in French it rains nails (ouch). The “other” language is filled with pieces of history. For example, in 1706, under the Norman Conquest, the official language in Great Britain was French hence words like quality and quantity that come from the French “qualité” and “quantité”. In French, the word “redingote” (a fitted coat) comes from the English riding coat. Many French expressions are used daily in English, such as “à la carte” or “après-ski.” Both languages have shared the same roof, on and off, for better or for worse, for a long time.

Language Belongs to a Civilized World

The province of Quebec represents the perfect opportunity to learn and master both official languages. We are surrounded by French and English. Why then, must the learning of one or the other resemble a chore? A businessman I once knew had complained to me that road signs were of late, only in French when they had been in both languages for so long. My question to him had been why, in all these years, hadn’t he learned to decipher the French from these signs? On the other hand, why is it that in Quebec, a French waitress cannot take a simple order in English? Why is it that so many people do not speak that second language after so many years in Quebec, if only out of good will, and in spite of the teaching and the laws?

Language is the very expression of our humanity, essential to life like water or air. Language should not be used as a weapon. Without language there is no civilization, hence the importance of at least tasting the “other” language, to better savor one’s own, one bite at a time.

Julie Hamel has been teaching ESL and FSL for over 20 years at all three levels: elementary, secondary, and collegial. Also, a freelance translator and poet, she has been teaching at Valleyfield College for the past five years.