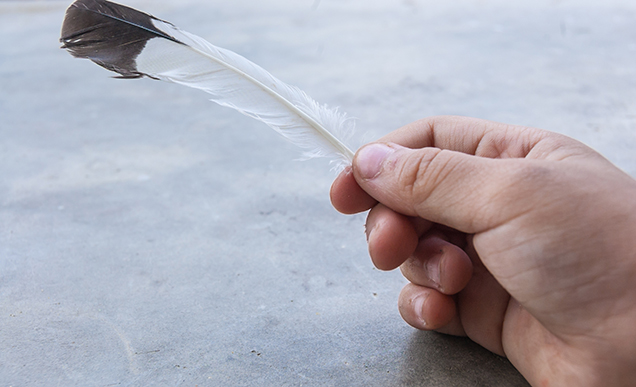 Besides being the original inhabitants of Canada, many argue the most pressing issue facing our country today is the past treatment of Aboriginal people by the federal government, mainly through the Indian Residential School system.

Approximately 150,000 First Nations, Métis, and Inuit children attended residential schools in Canada between the mid-1800s and late 1990s. Funded by the federal government, the schools were often run by Catholic and Protestant missionaries. Children were forcibly removed from their families and forbidden to speak their language or practise their culture. The goal was to assimilate them into European culture.

When Angela Nardozi asked an elementary class in Toronto what they knew about Aboriginal people, a young boy raised his hand and answered with confidence: they had no technology.

No technology—primitive, not connected to modern life.

Nardozi has also spoken to new immigrants who say the first thing they learned about Canada’s Aboriginal people is that “they drink too much”—another negative legacy of the residential schools.

In June 2015, the commission released its summary findings and 94 Calls to Action, steps the commission believes are necessary for reconciliation. Among those related to education is a call for “provincial and territorial governments, in consultation and collaboration with Survivors, Aboriginal peoples, and educators to make age-appropriate curriculum on residential schools, Treaties, and Aboriginal peoples’ historical and contemporary contributions to Canada a mandatory education requirement for Kindergarten to Grade Twelve students.”

This, many say, is long overdue.

“The schools kept us all ignorant,” says Commissioner Marie Wilson of the Truth and Reconciliation Commission. Many Canadians didn’t know residential schools were operating, or were told they were orphanages. Discussion of Aboriginal contributions to Canadian history in public school curricula was minimal at best. Residential schools may not have been mentioned.

Since 2011, Nardozi has been the manager of the Deepening Knowledge Project at the Ontario Institute for Studies in Education at the University of Toronto. The project educates teacher candidates about Aboriginal history and helps them prepare to integrate it into their teaching. Teachers want to teach this, they’re just not sure how, she says.

Even talking about Aboriginal issues can be overwhelming. “Aboriginal” refers to First Nations, Métis and Inuit people. But there are hundreds of First Nations, and each can have its own culture and history. While most define Métis as those with mixed European and Aboriginal ancestry, it originally described descendants of French fur traders and women in specific communities. Different Métis groups have different definitions. Inuit mainly live in Nunavut, although a large number reside in Ottawa. They’re distinct from the Innu of Labrador and northeastern Quebec.

Jurisdictions have been working to increase Aboriginal content and information about residential schools in curricula for years. Often, it’s included in social studies or history classes, beginning with discussions of Aboriginal life before contact with settlers. Residential schools are often not explicitly mentioned until junior-level grades. In-depth teaching often happens in mandatory high school classes.

In 2007, Saskatchewan became the first province to require that all students study treaties. Not taught separately, it’s to be incorporated throughout subjects, like English and history, the Ministry of Education said in an email.

Learning outcomes specific to treaty education are in a separate document, so it’s possible it will be put “on the back burner,” says Wendy Gervais, a Métis educator and elementary school teacher with the Regina Catholic School Division. Embedding the material across subjects adds depth, but also “takes a lot of time, takes a lot of training, takes a lot of resources.”

It also takes some explanation. Explicitly mentioning the need to include Aboriginal perspectives can cause some questions, says Jo-Anne Chrona, curriculum coordinator at the First Nations Education Steering Committee in British Columbia. The organization provides several resources to help teachers incorporate Aboriginal perspectives in different subjects. If Canada is multicultural, some want to know why Aboriginal culture is specifically highlighted.

“This is unique to Canada,” she says of her response to the question. “What we’re including here is the knowledge of the people and the cultures, the history and the contemporary society, that is part of our Canadian heritage. And if this material is not learned here or taught here, it doesn’t get taught anywhere else in the world.”

There are parallels between the injustices Aboriginal people experience and the experiences of students coming to Canada from war-torn countries.

“There’s so many Aboriginal people—First Nation, Inuit or Métis—that flee the reserve or flee the North because there’s absolutely no education or employment and there’s high rates of suicide, high rates of violence, high rates of mental illness,” says Mikka Komaksiutiksak, an Inuit originally from Nunavut, and the events planner at the Native Canadian Centre in Toronto. “That’s also another form of war that they’re fleeing.”

When teachers discuss residential schools, they need to acknowledge the abuses that happened. Some language is too passive, such as using words like, ‘unfortunate,’ says John Doran, a Mi’kmaq and consultant with the Deepening Knowledge Project.

“‘Unfortunate’ is a storm that comes,” he says.

More accurate curriculum exists. The Northwest Territories, in co-operation with Nunavut and the Legacy of Hope Foundation, introduced a module in its mandatory Grade 10 Northern Studies course specifically about residential schools. It’s no small subject: it’s meant to take up about one-fifth of the course. Residential school survivors were involved in the module’s creation, and teachers often have local community members speak to classes, says Mindy Willett, who helped create the module and resources.

Resources like this are important because many teachers may be learning about residential schools for the first time, even though they may see the impact of it every day. Statistically, Aboriginal students struggle academically more than their non-Aboriginal peers, another legacy of residential schools. “When (education) was such a negative experience for so many parents, it’s hard to just assume that there’s going to be automatic parental involvement in the schools,” Commissioner Wilson says.

That’s one reason all teachers in the Northwest Territories, and especially all new teachers, receive training about residential schools, says Willett. “Teachers may have made the assumption that some parents didn’t care because they didn’t show up to parent-teacher information night,” she says.

Then teachers learned some of the schools where they taught were former residential schools.

The complex legacy of residential schools is building relationships and hearing from survivors.

“This is not something that we have to learn to re-traumatize Indigenous people or to shame non-Indigenous people. It’s just the truth,” says Charlene Bearhead, education lead at the National Centre for Research on Indian Residential Schools at the University of Manitoba in Winnipeg. Opened in November, the centre houses all the documents obtained by the Truth and Reconciliation Commission. Discussing residential schools in an academic way without humanizing the experience is harmful for survivors, she says.

Today’s students may be intergenerational survivors. The Truth and Reconciliation Commission often heard survivors say their biggest regret was how they raised their own children, says Wilson. Some were distant parents who enforced harsh discipline or withheld affection, mirroring their experiences in school. Some abused alcohol or drugs to cope with the trauma of their residential school experience. Others abused their children.

Some families don’t talk about the experience, and may be hesitant for their children to learn about residential schools in the classroom. Some Aboriginal parents in the Northwest Territories were resistant at first, says Willett. Their concerns were often lessened when they learned community members were involved in making the course content, she says. Families also received letters about the unit beforehand.

Teachers need to “be respectful of that family’s healing journey,” says Nardozi. Parents may ask for their child to be removed from the classroom, and that may be appropriate. But this shouldn’t stop teachers from teaching the material.

Regardless, teachers shouldn’t “single out” Aboriginal students and make them “representatives” of residential schools or Aboriginal history or politics, unless students have “volunteered that information,” says Nardozi.

“I can’t tell you how many times I was put on the spot,” Rozella Johnston says. An Ojibway, she is the culture manager at the Native Cultural Centre. While raised on a reservation, she attended high school outside of her home community. Not knowing the answers to questions could be embarrassing. “(Students) want to be part of” the school community, she says. Being made to represent an entire history or group can make them feel awkward.

Because Aboriginal people speak English and know Canadian culture, people forget about cultural differences, Johnston says. “What Canadian people don’t recognize and understand is that we have our own culture. We have our languages. We have our own way of doing things.”

Non-Aboriginal educators are capable of teaching Aboriginal culture and history. But they need to not misappropriate the culture. Sometimes, teachers may want to have students make totem poles or drums, give them an Aboriginal name, place them in clans or perform a traditional ceremony thinking it will help students learn. That may not always be helpful. “You would never say, ‘Today I’m going to teach about Catholicism. I’m going to perform a Mass,’” Nardozi says.

Students need to know the meaning behind the activities they’re doing, says Doran. Totem poles, for example, record family histories. Instead of asking students to make a totem pole, it may be better to ask them how people in their culture record their family history. When talking about drums, teachers could ask students what their culture uses to bring people together. This helps students make connections between Aboriginal culture and their own, he says.

“That shuts people down. We need to acknowledge (the residential school system) was a terrible thing that happened, and it was not an accident, it was purposeful,” she says. “But that does not mean every (White Person) is terrible.”

While educators shouldn’t create harmful environments, they shouldn’t avoid entering the inevitable mess of discussing this part of history.

Objection to learning about residential schools because it’s painful, comes from a place of privilege, says Doran. Some people just want to see pictures of Aboriginal people living off the land—not on reservations. They don’t want to hear about trauma that makes them question their assumptions about Canadian history. They want to hear about “turtle tales and things that make them feel good.”

A student recently told Doran they wanted to hear “other good things,” something besides residential schools.

“There’s a time coming when that can be true,” he says. “But right now, people need to know what happened and this is an important part.”

Here’s the truth on reconciliation: it’s a lot of work.

We contacted provinces and territories across Canada to find out where in the curriculum Aboriginal history, culture, and residential schools, is explicitly taught. Several jurisdictions are working to incorporate Aboriginal perspectives across curriculum and subjects. Here is some of what we learned: