Is The Internet Essential to Good Teaching? 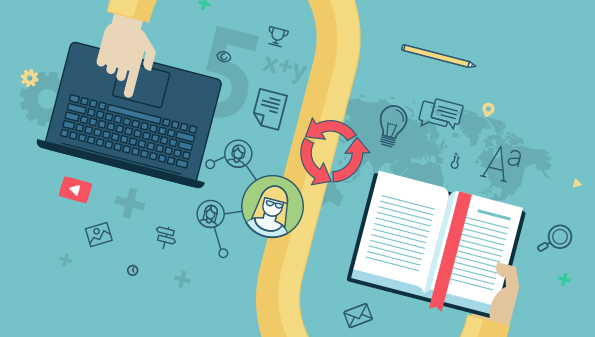 High-speed Internet access is not universal. But teaching with it—and without—highlights the never-changing qualities of good teaching.

Some students at Timothy Davis’ school live in homes that sometimes seem “primitive,” their principal says. They’re not connected to high-speed Internet.

Davis has worked at Deer Island Community School in Deer Island, NB for seven years. A small island in the Bay of Fundy, it boasts a population of about 1,000, more during summertime. Less than 60 students attend the elementary school, and Davis estimates 25 to 30 percent of them come from homes with dial-up Internet connections. Most island residents can access high-speed Internet, so the school isn’t “lagging behind,” he says. But when children can’t access the same resources at home, their academics suffer. They have fewer opportunities to practice research skills they’ll need when they attend high school on the mainland. (Ferries run regularly to and from the island.) Communication between the school and parents becomes difficult. Students bring home paper newsletters each week; not everyone can access updates on the school’s website.

Earlier this year, the school needed to phone a parent, only to hear a repeated busy signal. It wasn’t an emergency—thankfully. When they eventually connected, the mother explained she had been answering emails. Because her Internet connection is dial-up, this meant she couldn’t talk on the phone and answer emails at the same time.

“That’s not something a lot of us think about,” Davis says about the situation, adding he doesn’t remember the last time he had to use dial-up Internet.

Neither can many students and teachers. Forget dial-up; they don’t know a world without the Internet and constantly connected mobile devices. (The iPhone will turn 10 in 2017.) Virtual reality is reality. But for all this, teaching with limited Internet access reminds us of the importance of key components of non-digital life: places and people.

Location matters. Canadians like the Internet. According to the Canadian Internet Registration Authority (CIRA), in 2013, 87 percent of households were connected. This makes Canada the second-most connected country in the G8 and 16th worldwide.

Virtually all Canadian households have access to Internet speeds of at least five megabits per second (Mbps). The majority can access up to 10 Mbps. But that’s rare in rural or northern communities. Less than 80 percent of households in Saskatchewan, Manitoba, P.E.I, Newfoundland and Labrador and the three territories have access to 10 Mbps of Internet or more, states CIRA.

The Internet is a “network of networks,” explains Jacques Latour, chief technology officer at the CIRA. To share information, networks need to connect and be social. This happens at Internet Exchange Points (IXPs) that Latour describes as large switches. At these facilities, often managed by not-for-profit community groups, Internet providers may connect directly and exchange traffic, like transportation “hubs” says Latour. Organizations, like research agencies, school boards, or companies that pay to join these networks through peering agreements, can quickly access information from companies like Google and Microsoft. Canada only has six IXPs—all along the southern border. (The CIRA is working to create exchange points in major geographic centres throughout Canada.)

Students expect constant connectivity. “Unless your wireless goes down in your school, they’re pretty much connected full-time,” says John Procyk, who retired last year after 40 years of teaching high school in Vancouver. Teachers are expected—required, in some ways—to teach this way.

Unreliability remains one of technology’s few constants. All teachers need back-up plans. “A paper will never fail you,” Humber says—shortly before the Skype connection at the school where she’s a student teacher failed, forcing her to continue the interview by phone.

Teachers in rural areas are matter-of-fact about these struggles, but they’re still challenging. Limited Internet makes it hard for teachers to access what they need to teach. They may feel like they’re “on the periphery,” when it comes to participating in district-wide initiatives, says Virginia Ivey, who’s taught at a small elementary school near Kamloops, BC for more than a decade. The school’s wireless connection is slow. When the computer lab is full, little can be done online. (The school, that has just less than 70 students, has just over 20 computers in the lab.) As of early February, they were still waiting for a fibre optic line to be attached to the school.

The slow speed makes it hard to use Internet-based recordkeeping tools, or stay current on certain professional development opportunities. Ivey’s fortunate because her home Internet connection allows her to access recordkeeping platforms at home. She knows teachers in other areas who have to do this work at school, because the school has the best connection. Ivey attended her first webinar earlier this year, but couldn’t view the video. When she was president of the B.C. Rural and Multi-Grade Teachers’ Association, the executive met through conference call, not Skype. Twitter updates? Impossible. Hearing about different educational tools and programs excites her—until she realizes learning about them would waste her time. When the fibre optic line is installed, she hopes to “expand (her) horizons” and find new ways to better utilize the technology she has, like her interactive whiteboard. So far, she hasn’t been able to use much of the training she’s received about it.

Even strong Internet connections can slow down teaching. Planning takes longer. Teachers in earlier generations spent years perfecting specific lessons and stored them for reference, says Procyk. Not so anymore. Teachers can spend hours searching for the latest and best YouTube videos and apps. While Procyk says he likes the challenge of learning new things, it is “time-consuming” and can make balancing work and personal responsibilities hard.

Discrepancies in Internet access also impacts how teachers assign homework. They can’t assume students can use certain applications or programs at home to complete assignments. “It’s not a level playing field,” says Davis. They don’t assign homework that requires the use of these programs, no matter how good they are. In many schools, students work on large projects at home. But at his school, students work on science fair projects in the classroom. The teachers are used to this and schedule their time appropriately, he says.

But while lack of reliable Internet hampers some teachers, in other remote communities, the Internet makes education possible. Students across several northern Ontario First Nations communities, often only reached by airplanes or ice roads, wouldn’t graduate from high school without it.

Keewaytinook Internet High School (KIHS) opened in 2000 so students could earn Grade 9 credits at home. These communities sometimes with only a few hundred people, may not be large enough to sustain a full school. Students at KIHS meet in classrooms in nearly a dozen communities, where they access course material on an online platform. It’s similar to correspondence courses, says Kevin Dempsey, the school principal. Trained classroom teachers are there to help students as needed. Those teachers also produce subject-specific material for use across the sites. Students started completing full high school diplomas through the school about seven years ago, producing nearly 100 graduates. Many stay in the community after completing high school.

“The school is not about the Internet, but it exists because of the Internet,” says Dempsey. “It provides the bricks and mortar for virtual school that also has physical classroom spaces.”

“Kids are more in the moment. They’re more focused on what’s going on in the school,” says Ivey. While she waits for increased professional development opportunities, her teaching methods are more advanced than some teachers who have greater access. She doesn’t need to learn about how to incorporate local geography into her lesson plans. Instead, her classes study science at the nearby lake. Physical education happens outdoors.

Students have advantages, too. They have fewer opportunities to access negative content online, or to use social media to bully others. They’re forced to interact face-to-face, often across grades.

“I don’t wish non-Internet access to anybody,” says Davis. “But I do think (less access) has something to do with the culture of our school and our community in a positive way.”

Teachers with greater Internet access at school shouldn’t worry that will automatically make their students ignore those around them. Adults struggle with this too, says Humber. “Kids are people. Their behaviour is going to reflect their parents’ behaviour,” she says. “I don’t know if it’s an issue with children, or people.” When technology fails the teacher, students often want to help fix the problem. Their “immediate response is, ‘Maybe I can fix it,’” says Humber.

The Internet can’t replace positive, human interactions. No matter how teachers are able—or unable—to use the Internet to teach their students, they still remain the teachers. What good teaching looks like may change, but what makes good teaching hasn’t, says Procyk.

“Building relationships and communicating and having a great environment in the classroom between the teacher and the students, to me, is still the most important thing,” he says. “Everything else is still a tool.”

Meagan Gillmore is a freelance writer and editor in Toronto.