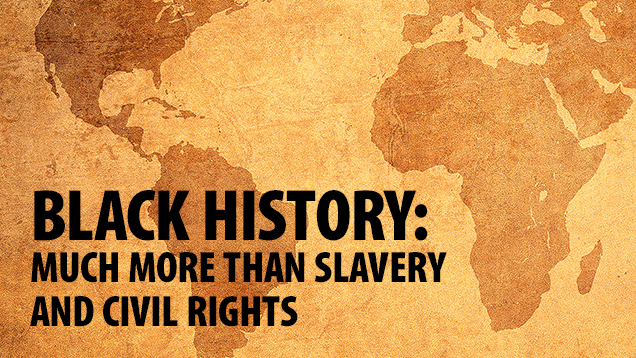 The Grade One student expected Nikki Clarke to discuss slavery. So Clarke showed a picture of a potato chip bag. As president of the Ontario Black History Society, Clarke often speaks about black history in schools. A former teacher, she regularly asks students what they know about black history. Children don’t sanitize their answers. This student responded simply, “Black history is when we’re made to feel bad about the blacks because they were slaves,” Clarke remembered. Some teachers chuckled and gasped, but Clarke continued with her presentation, telling children how people of African descent invented things they all loved, like the potato chip (George Crum) or the super-soaker water gun (Lonnie G. Johnson).

She wanted to show students black history is part of everyday life—and worth celebrating. “Black history isn’t about a blemish in history as this [student] understood it to be,” said Clarke. Helping students learn this presents challenges. Most North American students associate African, or black, history with slavery. Teachers may be the first to introduce students to that history.

Racism continues in our society. Descriptions of racist incidents fill newscasts and social media feeds—sometimes those platforms become places of racist activity. February may officially be Black History Month (called African Heritage Month in some places), but students and teachers see and experience racism all year.

While news about racial divides is constantly accessible, geography determines what racial tensions students encounter. Students who don’t know anyone of African heritage may ignore black history altogether. After all, February was only declared Black History Month in the United States in 1976. (This came 50 years after Negro History Week was first celebrated in 1926.) The government of Canada did not officially declare February as Black History Month until December 1995.

Canadian teachers may have fewer resources available than their American counterparts. Traditionally, Canadians shy away from uncomfortable topics. Discussions of racism often focus on the history of Aboriginal Canadians, particularly residential schools, or anti-Asian policies, like the Chinese Head Tax or Japanese Internment Camps during the Second World War. Students need to know about these events, but they also should be exposed to African history. “Anti-black racism doesn’t seem as a predominant story in Canada,” said Maryam Adrangi, a high school teacher in South Burnaby, BC.

Teaching African history well means telling the story properly. This requires creatively engaging the past and present. It also means encouraging students to reconsider their collective past so they can consider creating positive individual futures. Students need to see their cultures reflected in classroom materials, whether in posters or characters in books. Professional artists can help; some visit schools to teach African heritage.

Arts Express started run in-school dance, visual arts, and drama workshops throughout Ontario in 1995. In 2011, the organization began offering presentations focused on African Heritage. Despite the racial diversity in Toronto’s schools, little material was available on the topic, said Danelle Smith McManus, the organization’s executive director. Professional storytellers of African descent present stories in an interactive way. Some are fictitious, like Sweet Clara and the Freedom Quilt written by Deborah Hopkinson with paintings by James Ransome. It is a picture book about a slave escaping to Canada via the Underground Railroad. Others are non-fiction, like Jody Nyasha Warner and Richard Rudnicki’s Viola Desmond Won’t Be Budged, about the black businesswoman’s refusal to move to the all-black balcony at a segregated Nova Scotia movie theatre. She purchased a ticket for a floor-level seat, not knowing that area was reserved for whites. Her arrest sparked movements against segregation in Canada. Arts Express presented this story before it was announced that Desmond’s portrait will grace the new Canadian $10 bill, set for circulation in 2018.

Presentations connect to curriculum. It’s the most popular of Arts Express’s programs, Smith McManus said. The presentations focus on history—Smith McManus said the goal is to be educational, not political. Teachers can also use art to engage students in conversations about how anti-black racism looks today.

“Black culture is very popular, but black people are not,” said Ryan Cho, a high school teacher in Vancouver. He teaches a course about social justice, and this includes research assignments on movements like Black Lives Matter. Trained as a music teacher, he’s Asian and comfortable discussing theories about racial oppression and shared cultural values. Students don’t have this background, but they have entertainment. They may like listening to hip hop, but know little about the culture that created it, he said, noting many hip hop artists are white. His students look at popular depictions of race. This proves more effective than simply discussing theories about race and power. “Stories are a more powerful way to teach than numbers are,” says Cho.

That’s not to say only arts and social sciences teachers should discuss racism. Maryam Adrangi regularly incorporates social justice themes into her science and math lessons. In biology, students research the question of a biological component to race. She’s talked about the use of human experiments in medical research. A trigonometry test included a question about determining the size of a banner at a protest—and what they’d write on it. This engages students and reflects the world around them. Students discuss racial tensions in the hallways, so Adrangi thinks it should be addressed in class.

Not all schools are ready to address racism, said Adrangi, an Iranian-Canadian, who admits she can easily be mistaken as coming from an European background. She’s a new teacher, and still learning how to best address it. But she refuses to ignore the topic; the “only one way to really do it is to take that Band-Aid off and talk about this,” said Adrangi. Talk needs to be constructive. Cho avoids debates. Instead, students have dialogues. Debates can become destructive, he said. Dialogues emphasize understanding and community.

Even young children can learn these lessons. When Nikki Clarke was an Early Childhood Educator, she asked students to share bread from their families’ cultures—West Indian, Asian, European. Tasting the various breads easily demonstrated “how difference is delicious and it’s delightful,” said Clarke. Perhaps the students who most need to learn how different races are delightful, are those of African descent.

Children need to understand their identity, said Clarke, whose parents taught her about her Jamaican heritage, even while raising her in a white Montreal neighbourhood. Without this, students are like trees that can be uprooted and “knocked over” when problems come, she said. This becomes even more complicated when children doubt their cultural identity is worth celebrating.

For three years, Stefan Adjetey taught a high school African studies class in Windsor, ON. It’s an intense course filled with comprehensive discussions of what racism means and how it’s displayed. Racism is hard to define, but Adjetey compares it to running a race. Racism forms the power structures that put people with lighter skin closer to the front. People with darker skin start the race further behind the others. “Imagine running a race and constantly starting at the back,” Adjetey said.

Racism, past and present, can’t easily be ignored in Windsor. The city was a stop on the Underground Railroad; Adjetey’s classes have visited churches where slaves hid from bounty hunters. Close to Detroit, American news is as available as Canadian; students often celebrate both countries’ holidays. But his students provided a larger, and more subtle, display of racism’s impact.

Adjetey opened the course by asking students what they think it means to be black. Many entered the class eager to learn about how slaves gained freedom or heroes of the Civil Rights Movement. Their enthusiasm dwindled as the list of familiar negative descriptions grew: thug, gangster, poor, welfare recipient, and, only after he prompted them, the “n-word.” (Adjetey refuses to say the actual word, and argues people shouldn’t try to re-cast it in a positive way.) African students were just as likely to list these things as their non-African peers. The list of good things about being black was always shorter, he said, and often based on physical appearance or abilities: dancer, rapper, athlete. Women were praised for beauty, men for strength—the criteria used to evaluate slaves, Adjetey said.

No student ever listed “teacher” as a positive quality of black people—even though Adjetey is black—he moved to Canada from Ghana as a child. He co-taught the course, also with black colleagues. Adjetey’s students had black teachers and black principals. They live a short drive from the United States—where for eight years a black man was president. Yet, they largely defined blackness based on common images in media.

Adjetey watched students’ perceptions change. After asking what being black means today, he asked students to consider what it meant in the past. He didn’t start by discussing Civil Rights or slavery. Instead, he taught students about ancient African kingdoms: Egypt, Cush, Ghana. Now, they were challenged to picture black people not as impoverished criminals, but as kings and queens. “This is black people in an entirely different light,” said Adjetey.

The fact that considering black people as kings and queens seems counter-intuitive, or that African history and art are often regarded as separate areas of study shows how European-dominated North American culture is. “We’ve made white normal,” said Cho. “We’ve made white the thing that everything else is compared to.”

Reconsidering normalcy takes time. It involves studying the movement of slaves across the Atlantic, the marches for Civil Rights and, yes, the discrimination that exists today. But as teachers challenge students to consider the greatness of African history, they can encourage all students to aspire to greatness today and tomorrow, especially beyond February.