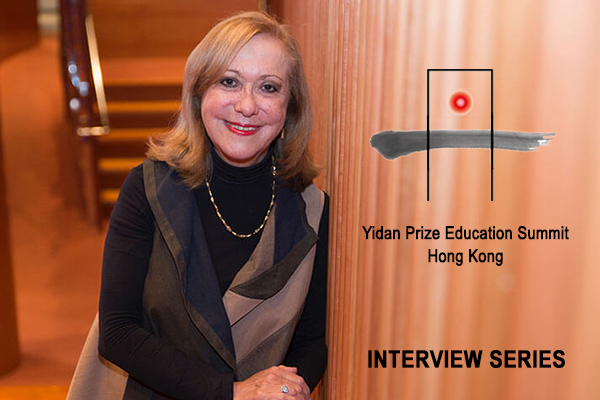 Vicky Colbert is the founder and director of Escuela Nueva (New School), an NGO dedicated to improving education through child-centred learning in underprivileged communities throughout South America and beyond. In 2017, she was received $4 million as one of two winners of the Yidan Prize—the world’s largest education award. The prize was established by Chinese philanthropist, Charles Chen Yidan, who is on a mission to create a better world through education. We recently sat down with Vicky at the inaugural education summit in Hong Kong to discuss how she revolutionized education in parts of the third world.

Q: How many teachers are there in Colombia roughly?

A: In rural schools there are 34,000, but there’s more concentration in urban areas. Our NGO also adapted it to urban schools, it’s not so much a need as it is in the rural areas, however. We also adapted it to migrant-placed children in Colombia which is so important because, in less than one year, they were beyond the national mean.

Q: What happened in the early days when you first started out in these rural communities? What was the reaction from the community, the teachers, were they welcoming, were they resistant?

A: When we started initially in those isolated, rural multi-grade schools, “invisible schools”, I call them, the teachers were really desperate for help. They couldn’t handle first, second, third, fourth, and fifth grades in the same classroom. So just having some support was very helpful to them. Teachers were very open. However, the community said, “come on, they’re playing!” It’s a Montessori approach and a “Regina Mundy” approach. It’s nothing new in the philosophy of education, the only thing is, we had concrete instruments to put into practice. We wanted to introduce innovation and change the way of working in these isolated schools, so we started having demonstration schools in different areas of Colombia.

Q: Over what time span did the changes occur?

A: Ten years. This ended up being a national policy and I ended up as Vice-Minister of Education, so I took it to scale, reaching more than 20,000 schools in Colombia. The World Bank selected it as one of the three innovations that successfully impacted national policy. At the same time, many countries (in Central and South America) started to send people to Colombia to see what we were doing and I started sending Colombian teachers abroad.

Q: So, was your NGO funded by government?

A: No, we’ve grown and learned how to survive, even though there is not a culture of philanthropy in Latin America. Fundraising, like in the U.S. or Canada, doesn’t exist. It’s not that easy, but we’ve learned how to be self-sustained and we provide technical assistance to other countries and to the regions of Colombia.

Q: What about teacher training? How does that happen?

A: Our faculties of education are full of philosophy, but had no practical support for the teacher, so we had to compensate what teachers’ colleges or faculties of education were not doing. We had to design training that was extremely experiential. Teachers go through the same methodology that they will be using with their students—totally experiential. So, we had to out beat the system and start bottom-up approaches.

Q: So I guess the lesson is, it’s not just places like South America where these things happen, they happen in so-called western, advanced societies as well?

A: What is interesting right now is that you can see on our web page pictures and articles in the New York Times. Developed countries are inviting us to introduce Escuela Nueva, so why not [export innovation] from south to north [America]?

Q: We can’t ignore the development of technology. How do you see that influencing what you do?

A: I think technology is very important, but we have to be very careful of how we introduce it. As I quoted a friend from Israel, who is head of a technology centre, just introducing computers and laptops into your classroom without changing your pedagogy perpetuates at a higher cost than traditional technique. We’re doing it very gradually. We have introduced virtual resources to complement our learning materials. They’re never used in rural Colombia because there is no connectivity. In urban areas there is, so they are using more of the technology as complementary to the pedagogy, but we are introducing it very cautiously. We must think of costs also. We need more teachers to come into the picture, and I think one of the impediments for technology in Latin America, are teachers. Children know more about the technology than the teachers.

Q: What impact will the Yidan prize have?

A: It will strengthen the implementation of Escuela Nueva in Colombia, and especially, we want to strengthen it in those areas where the conflict was, and second, we want to continue doing research and development.

Q: How do you see the influence of China? We’re in Hong Kong, the Yidan Prize, China is stepping up on to the global stage, and now perhaps we’re seeing this in education as well?

A: They’re very interested especially since Vietnam is implementing Escuela Nueva full-country. I sent Colombian rural teachers to Vietnam, they trained the other teachers there. They’re having amazing results apparently, cognitive results. So, we’re going to see what’s going to happen in the future.

This interview has been edited and condensed for clarity.