Put Down the Chalk and Retire 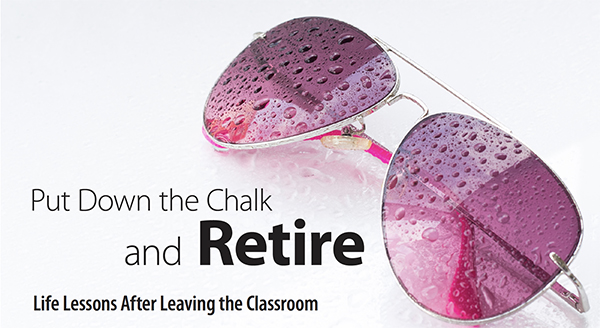 As a teacher, you’re on the clock 24-7. Everything reminds you of a possible science experiment, history project, or art piece. Every day is scheduled; weekends and evenings are spent marking and planning. Other than some precious weeks in the summer before you start to gear up for September, your life plan is set.

Retirement—where every day is unscheduled, wide open, and full of possibilities—may seem like a dream. Now is the time to reorganize the garage and paint the fence, digitize that old family photo album, read that stack of novels, and watch that season of Downton Abbey you somehow missed when it aired. But eventually you realize: you have nothing to do.

Making the transition from that full-time educator role (and mind set) takes careful planning and introspection to stay passionate, healthy, and social. “It’s important to have awareness of what that transition will look like,” says Kate Dack, founder of Retirement Coaching Canada. Generally, there’s a honeymoon period of retirement, she says, a certain elation: go on that trip, be free for that role, check out that new gallery, build that set of drawers. “It’s time to get all those loose ends that were left in the business of life,” Dack says. “Teachers are so burdened and that makes the honeymoon period that much more elated.” But soon enough, the honeymoon is over.

James Reynolds ran into this problem when he retired as superintendent of the Ottawa-Carleton District School Board in 1997 after 33 years on the job. “I had a bit of time, so I painted a room. Never painted one again, it’s not for me. I did some stuff around the house, I watched TV… but it was boring,” says 75-year-old Reynolds.

Luckily Reynolds had a plan in place: he already spent his free time judging championship dog shows. As a retiree, he planned to continue doing just that. Now in his 50th year of judging shows around the world, Reynolds knows he made the right choice. “I consider myself so lucky,” says Reynolds. He travels the world for canine competitions, from Australia and China, all over Europe, and across Canada and the U.S. “I was in this hobby before I retired. I have this social network and this thing to organize.” It was all set out for him. “If I hadn’t had that, I would have set something else up,” he says.

Finding that passion doesn’t always happen easily. “You have to do some deep self-analysis,” Reynolds advises. Ask the big questions: What do I want to do now? How do I want to fill my time? Who do I want to see? What really lights me up? “There’s a dis-identification,” Dack adds. Who will I be? “There’s that sense of a dramatic change in purpose.”

As you come to understand yourself, you’ll be more aware of the transitional period and what it takes to make a plan. “Start with a very wide outlook, a big canvas. Put on those rose-coloured glasses and use your imagination,” Dack advises. “Find what energizes you, what excites you,” she says. “We are looking for things that make us feel alive—and some people don’t know what those things are because they’ve been so busy.” It’s important to keep in mind that retirement won’t make you a different person. “Know your own strengths and what you can do with them. It won’t suddenly fall into place. You need to build on your strengths,” says Reynolds.

After the deep digging, make detailed plans. “Create a personal and energizing retirement vision,” Dack says. Ideally, start building that vision at least five years prior to retirement. “But you have to build it in a detailed way,” Dack cautions. Let’s say you love cycling and you want to bicycle across France. You need to research pathways, roadways, weather, gear, pricing, training schedules. “Approach creating an energizing vision based on your core needs, understanding self, possibility thinking, and also based on research.”

Carole Whelan, who retired in 2009 after 34 years with the Toronto District School Board (TDSB), started planning early. “It swirled around in my head about what I wanted to do,” says 65-year-old Whelan. Her goal is to build her own family tree, so she started by organizing files and taking an online university course on family history. “It’s like anything else, you don’t know what you don’t know until you study it.” Now, Whelan, who spent most of her working years as a history teacher, takes a couple hours each day to research and write. She and her husband travel frequently and often choose European locations based on her research, so they can visit places their ancestors lived. “I was a history teacher, but now I’m doing it myself, I’m learning more. I’m forced to connect the dots,” Whelan says. She’s using those strengths and skills to fuel her own interest, and it takes her well beyond a history book. “We live for the next trip.”

The unfortunate reality is, however, your retirement plan must include more than travel, socializing, and projects. For Whelan, family commitments arose: she spent time with her elderly mum and dad, “and grandkids appeared,” she says. The detailed plan has to include duties, explains Dack. “You have to look at ongoing responsibilities: aging parents, maybe an ongoing chronic illness in yourself or your partner,” says Dack. Whelan agrees: “We are the sandwiched generation.”

Mary Barnes Amoroso, who taught for 32 years with the TDSB before retiring in 2012, is also part of that sandwiched generation. The other layers of her familial sandwich include her 91-year-old mother, siblings, two kids and their partners, nieces, and nephews. After retiring, her responsibilities went further than family: she ran a summer drama program for four seasons and secured a long-term occasional guidance counsellor gig right out of the gate. She still substitute teaches occasionally. “It’s nice and fun and I stay connected, but I can also say no,” says 64-year- old Barnes Amoroso. “When you step away from teaching and come back as a supply, you realize the skills you built. I’m not intimidated. I know what to do.”

More recently, Barnes Amoroso—who has always enjoyed drama—joined a theatre group. “It’s just fabulous,” she chimes. She even volunteered as a stage manager (“Not my strong point, but I learned,”), wrote a play, and currently chairs a play-development group. “Some people do ceramics or quilting, and I discovered I love writing scripts and working behind the scenes.”

Staying socially connected is absolutely critical. “In retirement there is time to deepen connections and relationships,” Dack says. Attend to quality time with loved ones, friends, adult children, siblings, grandchildren. “Because when challenges come—which they will—you won’t feel alone.”

Reynolds agrees staying connected is of utmost importance. “Even if you’re the worst golfer, join the team and get out there,” he says. “Otherwise, your social world just gets narrower and narrower.”

Whelan finds herself booked to the brim. “Now when I try to organize a dinner with retired friends it’s so difficult. Everyone is so busy,” she says. Barnes Amoroso’s schedule is also very full, “For the first time in my life, I need an agenda,” she says. “I’ve made my life rich by getting together with friends and family and planning travels in the off-season.”

“Being retired, I get called all the time—people know I’m not working,” says Barnes Amoroso. “But now it’s about finding a balance between internal reflection and outside social time.”

Finding balance is part of health and wellness, another top priority. This means focusing on diet, exercise, care for chronic illness, pain, or injury, advises Dack. But physical health is just one side of the coin. “As we age, serotonin diminishes, so we need to work on emotional wellness,” Dack says. Know your limits. Understand what triggers you and know how to balance yourself in stressful situations. This is where increasing positive mental attitude comes in. “There’s a lot of talk about gratitude and empathy and it’s not just Pollyanna talk—it’s very important,” Dack says. “People who can practice putting on rose-coloured glasses and see the good instead of just the bad do the best in retirement.”

To make the most of retirement and stay healthy, happy, and passionate, start with deep introspection. Ask the big questions. Find something that energizes you and builds on your strengths. “It dawns on you at some point that it’s too late. That bell goes in September and, without anything to do, it’s killer,” says Reynolds. Once you find that passion, make a detailed plan based on research and imagination. “The more one prepares for anything in life, the easier it is,” Dack says. “Some people go on to use their skills in another way and create their own next chapter. It’s just filled with possibilities.” Above all else, put on those rose-coloured glasses and enjoy the golden years.