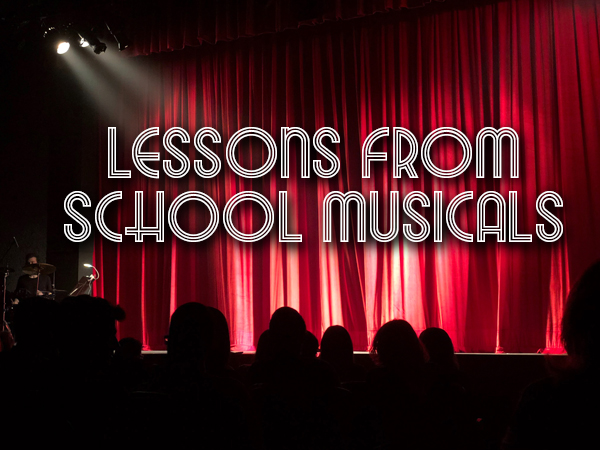 My appreciation of musicals started with The Sound of Music soundtrack. As a child, I listened to the entire album. I branched out to other musicals discovering they comprised a favorite form of entertainment both on stage and screen. I realized musicals had much to offer instructionally and thus, bridged a favorite pastime with my professional life. Musicals form an important part of the arts, serving as powerful resources for student learning, engagement, and motivation.

When I approached the school’s musical directors to see how I could contribute, I never knew how career changing it would become. I learned our school was participating in a local competition, the Rising Star Awards, with our local theatre. I was tasked with bridging the school musical, Carousel, with our high school curriculum and state standards, and build a lobby display.

I created a study guide for teachers wishing to do lessons. The study guide provides a history of each musical, characters, plot, songs in the score, concepts for thematic, subject-specific and interdisciplinary learning, activities and resources. I assigned students in my advanced Spanish class to create song translations and ink drawings tied to the Carousel score. Students in French class were asked to create a show program. The lobby display was created under my direction of a carnival scene inspired by the Rodgers and Hammerstein musical with a 24-foot-long mural of carnival amusements in tempera paint, calliope music, and a ticket booth. Teacher chaperones dressed up with boater hats and bright red ties. Projects were placed on display to coincide with performances for audience members to see. Response was enthusiastic.

The night of the Rising Star Awards arrived a few months later. I received the Educational Impact award judged on the support materials I submitted showcasing students’ art work, projects, and the Carousel study guide.

I kept on with the musical integration program and it grew bigger. We staged Bye Bye Birdie, The Boys from Syracuse, The Music Man, Hello, Dolly!, Anything Goes, Into the Woods, and The Boy Friend. Faculty participated voluntarily. More teachers and students became involved in their regular classes across subjects, including world languages, language arts, video production, visual art, culinary arts, social studies, and science.

For the remaining seven show integrations, we received the Educational Impact award at the Rising Star Awards ceremony. It seems we were doing something right. The combination of student activities and projects in regular classes and co-curricular lobby and cafeteria displays focusing on the visual arts, became a highlight of the academic year. It was wonderful to witness students not in the musical production complete projects and artwork inspired by the themes and music of the school productions. The displays came to life and audience members enjoyed and complimented our work.

Projects included: cameo jewelry drawings and stain-glassed window drawings with cast members’ likenesses linked with text in Italian, show programs, paper dolls of cast members in period costumes, musical-themed quilts, a Red Riding Hood cloak tied to Into the Woods with Italian text, a Reno Sweeney scarf for Anything Goes with Italian text, and the history of musical instruments with cast members photographed with the instruments, among many others. All of these lessons brought excitement to the general student population. Students applauded when they saw completed quilt projects, sang along or tapped their feet to show tunes, and worked closely with classmates to create the most artistic projects they could produce. Students often proudly pointed out their projects in displays to parents and classmates during performance intermissions.

When the musicals initiative began to filter outside of our school walls, I knew we could influence teachers at other schools. I wrote magazine articles for educational publications about musicals across the curriculum as well as tributes to musicals staged thirty plus years earlier. I also published composer tributes to Meredith Willson, Richard Rodgers, and Rodgers and Hammerstein, with an article marking Leonard Bernstein’s birth centennial scheduled for August 2018.

Realizing that all this holds so much potential in student learning, I have explored curricular frameworks to see how they support musicals for learning. I have written subject specific articles bridging musicals with language arts, world languages, social studies and visual arts. I am also currently writing a book-length description about musicals across the curriculum.

Materials for supplies and artwork are now part of the musicals budgeting process. Having applied for grants through a county arts council, we increased funding for three musicals. Our school was awarded two certificates of recognition for contributions to the arts by the arts council.

Educators who wish to integrate musicals should start small, build upon early attempts with subsequent student groups, develop study guides, and innovate with thematic activities and projects. I also recommend exposing students to musicals through audio and video clips and encourage them to tap into their creativity and learning strengths while aligning to curriculum standards.

The musical integrations supported the faculty involved in staging as well as the casts and crews of our school musicals. The resulting musical class projects were satisfying and rewarding because students exerted effort in their completion and enjoyed having their work placed on public display. Students shone through this exposure to musicals, some becoming big fans of the genre, learning both content material and musicals simultaneously. We are ready for an encore.

Keith Mason, Ph.D. is a researcher and educator based in New Jersey who specializes in language education, curriculum, phonetics, Romance linguistics and musicals in the curriculum.