Teaching Music in the Far East 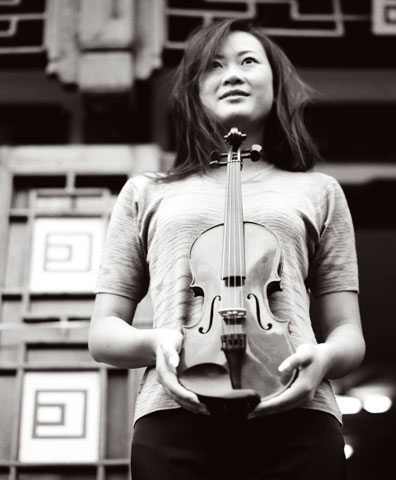 Seeking a new experience teaching music, I decided to cross an ocean and arrived in Hong Kong in August 2004. In the process, I discovered that teaching the arts is really learning the arts when instructing in a cultural tradition very different from one’s own.

The school itself was a semi-subsidized secondary government school from forms one to seven. Following the British system, students worked towards writing their Hong Kong Certificate of Education Examination at the end of form five. Two years before my arrival, the school consisted primarily of students from mainland China. Since then, school administrators had decided to follow the English Medium of Instruction. This meant 10 percent or fewer students entering form one would be accepted from mainland China. The rest would come from India, Pakistan, Nepal, and the Philippines.

On my first day of classes, I was given a textbook to teach the music curriculum to students ages thirteen to fifteen in lower secondary, forms one to three. As music classes were mandatory for these students, my teaching schedule included 11 classes of 45 students each. According to textbook guidelines, I was to teach a mix of Western music theory, history, and recorder.

Although the textbook included some study of Chinese traditional operas and instruments from the traditional Chinese orchestra, it was written almost entirely from a Western perspective. Many of the listening examples and structural analysis questions were based upon some of the “great” works of Western classical music.  From the beginning, I wondered if this curriculum truly applied to students from south Asian and southeast Asian countries? And, if not, what could I do differently to address my students’ needs with my resources?

As general music classes began, I realized that the music program did not allow for the greater student body at the lower form level to participate. Many students did not want to learn about classical Western music. At home, for example, most students from India listened to their country’s traditional ragas or Hindi pop songs. While in the East, how could I facilitate students learning music when the methods I had developed over the years seemed more suited to students in the West? I felt students were not really responding to the music I taught, due largely to cultural differences between them and me. There were no relevant teaching materials for students of these cultures. How could I reach my students? After really probing this question, things happened which led me down a completely different path. By travelling this unknown path and by experiencing the music of other cultures, I understood more about both teaching and events helped me see that I had been teaching the students from my Western, rather than their Eastern, outlook. These same events enabled me to teach music from a more Eastern perspective.

With my administration’s support, I decided to throw the Hong Kong music textbook out the window (so to speak). I found that in sharing my cultural music, Maritime folk and rock, for example, I sparked students’ interest. I began teaching Canadian songs to students. I thought the songs were animated and enjoyable for these students. As I accompanied the students on piano, however, I noticed their difficulty matching the pitches when singing.

One day, a student brought me a popular Hindi song from a well-liked movie. As I listened to the song, which was full of vocal shaking, quarter tones, and which was based on scales largely unknown to my Western ears, I finally started understanding why many students struggled with the music I gave them. At the same time, the students’ own music was beautiful; I began thinking about how to bring this music into class, enabling students to share their songs with one another.

In the meantime, a student from the Philippines gave a thorough, voluntary presentation on music from her country, including a brief history of the Philippines and the impact of national changes on its music. Her presentation included a song in Tagalog, which she taught to the class. Meanwhile, I learned something fundamental about Philippine culture: due to Spanish and American influences, Philippine music was full of Western nuances. As I had started teaching harmonies in music class, I observed that many students from the Philippines could sing the harmonies and add harmonies of their own.

Shortly after the presentation, a student from Nepal asked me to teach him to play a Nepalese song on the guitar. He had with him a fairly modern Nepalese song on tape, sung in a folk style by a contemporary Nepalese band. I wrote out and taught him the chords on the guitar. A few days later, he reappeared with friends, who asked me to teach them the vocal, bass, and drum parts, too. I agreed to help them, and arranged the song for their group.

For hours, I worked with these students, helping them develop a version they liked of the song. I gained valuable experience from teaching these students. To guide them to create the sound they sought, helping them remain true to their style of music, I had to abandon my own understanding of certain Western musical concepts. I learned that pitch, meter, and rhythm are culturally constructed ideas. For example, there were changing meters that were foreign to me, as well as phrases different in length from many Western pop songs. My challenge was to listen carefully for changes that emerged when the students played. As they improvised, they would occasionally make shifts in meter in the music in places not written in the music I had helped them arrange. Yet, somehow, they made these shifts together. As they had asked me to play the keyboard with them, I learned to shift with them during these times. Students began emerging from various classes, giving me traditional songs from their countries, and asking me to teach these songs to the class. I believe many students felt a need to have their own cultural ideas validated within the curriculum. As I had gained their trust, music class seemed the place for this to occur. I began to teach Urdu, Tagalog, and Nepalese songs to the students. We added vocal harmonies, guitar, bass, and drum parts to many of the songs. I compiled a student text of songs from the East and West, with instrumental arrangements.

General music classes became more meaningful for the students (and me). Students played and sang in class and were more open to learning music theory and notation. They were also more interested in learning music from their classmates’ countries. I felt the class had truly succeeded when students from the Philippines requested a song from India, or when a student from Nepal asked to sing a song from the Philippines. Once, three students from Nepal taught rock drumming to a classmate from China. Experienced in playing traditional Chinese drums, their friend learned rapidly.

I think the students and I felt most successful when I started the school choir. During rehearsals, a student from Pakistan was the first to learn a solo in a Western choral number, a soprano solo quite different from the traditional Pakistan music she knew best. Nonetheless, she sang the solo in a high, clear voice. Students from all the countries represented in the school joined the choir. Male and female students from India, Nepal, Pakistan, the Philippines, Egypt, and China participated in rehearsals and a final 30-minute performance during graduation. Everybody worked together
extremely well.

I faced several challenges in teaching the Hong Kong curriculum within the multicultural context of the school: the music curriculum was full of largely Western materials and approaches; yet, the students came from rich, primarily Eastern, musical traditions, which were not validated in the curriculum. I, therefore, had to restructure the curriculum and provide supporting materials to suit my students’ needs. Another challenge: I was not, at first, keenly aware of the students’ Eastern musical traditions; specifically, the elements in the music which they listened to every day and participated in with their families. However, after I listened to and studied these musical traditions, the music program really progressed. In many ways, teaching in Asia parallels teaching in Canada. In an increasingly pluralistic society, I am constantly blessed with a more diverse student population. By maintaining an open mind and the willingness to reflect the multiple perspectives of my students, I hope to help my students experience sharing as a form of learning within the classroom. I believe sharing forms the basis of a thriving and healthy multicultural classroom in Canada, an insight which helped me and my students during our journey in the Far East. 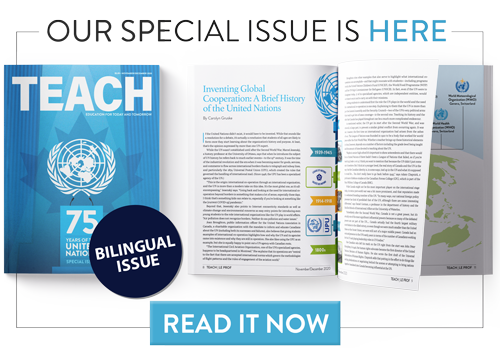