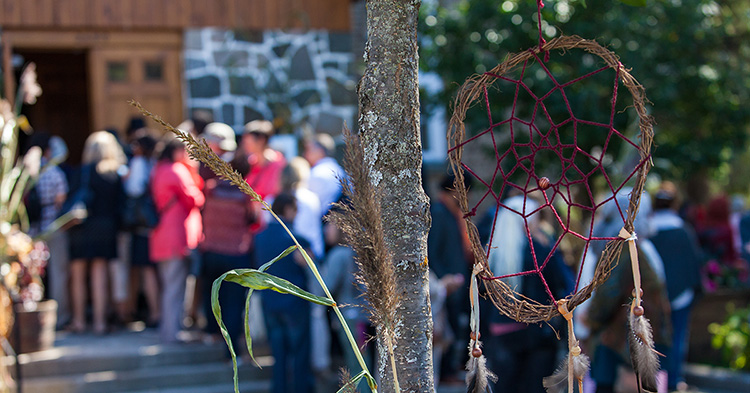 I moved to the Pine Ridge Indian Reservation as a naïve 22-year-old teacher in 2009, with high hopes and big plans to instill my love of writing in my 80 incoming middle school students.

My principal informed me there was no formal writing curriculum—I would have to create one from scratch.

I quickly ditched the idea of throwing together anything from the materials in the two creaky roller carts in my classroom: a class set of dog-eared red Merriam Webster dictionaries and an 80-year-old set of Houghton Mifflin grammar books, so scarred with gang signs and ink as to be illegible.

I paid out-of-pocket for class sets of novels, drafted long term plans, pirated resources from the lethargic internet connection. Then, I eagerly awaited my first batch of students, who I quickly learned had their own ideas about what would happen in my classroom.

They nicknamed me “Miss Tomato” on the first day of school and chose to either sleep through my class or litter my classroom floor with confetti of spitwads and chewed gum. My first indicator that my students could write, with enjoyment and from their own free will, came in the form of a chastisement from my principal, on the second day of school.

“There was graffiti found in the girl’s bathroom,” she announced, at an “emergency” after-school meeting. “We’re on Day 2, people, and I just read the kids the Riot Act this morning. We need to nip this behavior in the bud.”

My principal dismissed the other teachers. She kept me behind. “Alexa,” she said. “Which one of your female students used the bathroom today?” I asked how she knew the culprit was one of my students. My principal held up the incriminating green pencil stub, found in a stall. “I gave each teacher a different color of pencil,” she explained. “Yours are green.”

Students at my school were not expected—nor allowed—to bring any supplies from home; the school provided folders, pencils, paper, and journals. The reservation school was located smack-dab in the poorest county in the United States—where 97 percent of families lived below the federal poverty line and families averaged a yearly $4,000 income.

The overarching school environment stressed almost militaristic discipline and control, in an attempt to provide my students with structure they so desperately needed. Into this atmosphere, I introduced the smallest modicum of freedom and choice.

I told my students they needed to write a page each day; but what they chose to write was up to them.

Micco Brave Dog, a 12-year-old seventh grader, liked to write little stories featuring Indigenous protagonists for his required page-long journal entries. In one such story, which he titled “From Abandonment to Independence,” he wrote the life story of a 10-year-old Native girl named Tatunka’win.

Their classroom journal entries were how I came to know them—to really know them—and to see beyond their misbehaviors to the trauma they wore like badges of honor.

One of my students, named Cetan “Hawk” Little Thunder, was an eighth grader who read and wrote on a second grade level, but whose intense blue-grey eyes followed every motion of my dry erase marker, as if he wished he could absorb the scrawls through intention alone. My principal had told me that the Little Thunders were a “rough” family: Hawk’s parents were in and out of jail, his older brother had joined a gang, and his sister had already dropped out of high school. “He may be the only one in his family who has a chance,” my principal said. “He wants something more for his life, and he knows education is the only way he’ll get off the reservation.”

Hawk wrote in his journal:

miss talamo i am so tird of death death all around me everywhere i turn i cannot escape it and i am so afraid so afraid i will lose to death.

I knew about the reservation’s high death rate and low life expectancy (47 for men, 52 for women). I knew some of my students had been hit harder than others by death: Hawk, at age 13, couldn’t even count the total number of his deceased friends and relatives on both hands.

I could tell that my students were bored with my lessons; my classroom instruction wasn’t cutting it. These students needed more than a first-year teacher who couldn’t properly manage her classroom and expected them to be excited over stories with clear beginnings, middles, and ends.

I brainstormed ideas over the summer. I attended professional development at the National Writing Project. Make writing meaningful for students, my mentor advised. Give them incentives to learn.

I returned for a second year with a re-vamped curriculum and the idea for a classroom store, where students could “buy” candy or stuffed animals or cameras or jewelry after amassing enough raffle tickets earned for attendance, class participation, completed homework, improvement in their writing grades.

The day I introduced the classroom store, Keya Walks Out—a 16-year-old seventh grader interested only in the American Indian Movement—snickered. “What am I going to do with a pink stuffed bear?” he asked me. I knew Keya was fiercely protective of his younger sisters; I asked if he could earn prizes for his sisters. He replied, “I guess” and put his head back down on the desk.

Later that evening, I paused over Keya’s submitted writing assignment for the day. I had assigned the students to write an “I Don’t Understand” poem, and Keya had written two sentences, across a single line:

The classroom store, for students like Keya, wasn’t going to cut it, either. I had a break-through with Keya only by accident, when my principal put me in charge of preparing students for a county-wide speech competition. Eager for a chance to miss a day of school, Keya volunteered—for the first time in my history with him—to join the team.

I let him write an expository speech about Russell Means. I was surprised by how seriously he took his writing. On the day of the speech competition, he brought home a second-place finish—and, for a very brief moment, he gave me a smile.

Keya’s victory made several things immediately clear to me: my students needed to experience success. They needed to write about what they loved. And they needed to see that their writing could impact a broader audience than the one held captive each day between the four walls of my classroom.

I decided I needed to celebrate my students’ writing, and that they needed to celebrate each other. I created a monthly newsletter featuring the students’ best writing, which they helped disseminate to each homeroom class. I started publishing class anthologies of the students’ writing twice a year and accepted art submissions from my students to accompany the pieces. These anthologies—along with the students’ journals—were the only school items not discarded in the giant gray trash bins left in the middle school hallways on the last day of each school year.

Soon after the first installment of “Voices from the Middle” ran, a section of my students decided they wanted more time to write. They asked me to start a newspaper club. Twice a week, we gathered in my classroom for two hours after school. I brought in my coffee pot from home and four different kinds of tea; they enjoyed how seriously I served them tea and tiptoed around the room, so as not to disrupt their creative thought process.

Ghost Story Night evolved from the newspaper club. Like many middle school students, mine were obsessed with horror stories. I gave my students one hour to write; then we lit candles and turned off the lights, and the students, delighted, read their completed pieces to the shrieks and howls of the others.

Seeing how excited my newspaper club students became when they were allowed to write together or share their writing, I re-worked my approach to my writing classroom. Rather than assign a paper, give students time to write, then collect and grade their papers, I switched to a writing workshop format. Students conferenced with me twice, and with each other through peer response once, before turning in their final drafts.

The result was that they tried harder. They also enjoyed the assignments more. My students were slowly starting to see that they could find joy in writing. But I wanted them to realize writing could be more powerful than just that.

In my third year of teaching, I started with a slam poetry unit. I had my students watch “Why I Love Education But Hate School” by Suli Breezy, “Pretty” by Katie Makkie, and “Thinking About You,” performed at Brave New Voices by a young man named Mike. I watched their eyes widen.

“Can we really write about things like that?” one timid eighth grader asked me. I told her they could, and I turned them loose. I watched them write.

Eighth grade student Renae dove straight into a poem about her complicated relationship with her abusive parents:

Their writing was real, raw, honest. Too good to contain to our classroom. I subscribed to Teen Ink, a monthly magazine written by teenagers. I helped my students set up online accounts. I gave them one class period each month to submit their best works—and they did so with gusto.

My students did not seem to care whether their writing was published in the magazine or not. The online postings allowed other teens to comment on my students’ submitted works. I saw immediately the joy they found in connecting with other teens from across the country, through their writing.

It took me four years to figure out a working formula, but my students eventually experienced the power of writing, the sense of connection that came from sharing their words with others, and an understanding that they were not alone in the struggles they faced.

“I’m still writing, Miss Talamo,” many told me, without my having to ask.

*Student names have been changed, but their work has been republished with parental permission and unedited, to represent the struggles they face.