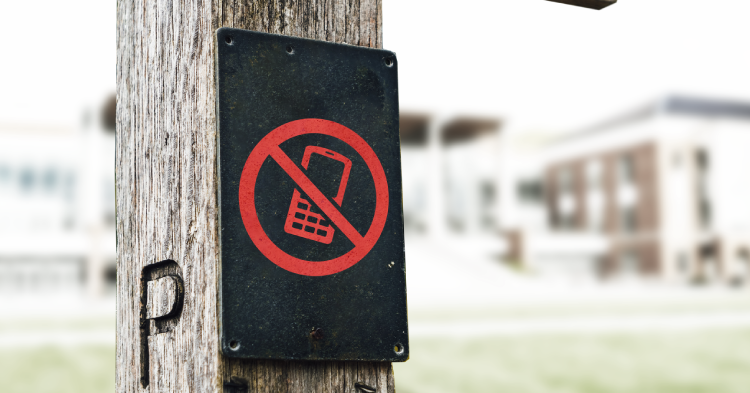 Sounds of dodgeball and basketball tournaments replace the buzzing and pinging of cellphone notifications. Students attend club meetings instead of participating in group chats on social media.

During the 2016–2017 school year, the school initiated a policy prohibiting students from using cellphones during the school day. They can continue to use other devices in a classroom or library for schoolwork, explains Kerry Riccio Aguero, the school’s vice-principal, but cellphones are not allowed.

“When [the new policy] was implemented, we got tears from some people and boos from others,” she says. The goal, however, is to protect students emotionally and mentally, continues Riccio Aguero. Students were bullying each other online, and ignoring each other offline.

“[Previously,] students weren’t interacting with each other,” she explains. “They were on their phones and they were completely tied into the digital media and not taking the time to be kids.”

If the number of children playing sports at lunchtime is any indication, that’s changed now. “It’s been huge to watch the transition here,” she states.

Most teachers recognize students will use cellphones during class—for example, to verify information—and that can be a good thing. It can be frustrating or distracting, however, when students use them as mirrors or to send videos to classmates. It can be nasty when they use them to bully students during school hours. Some schools counteract this by supplying students with devices that can’t access social media platforms. Others require students not to use cellphones during school at all.

In Canada, the Ontario government made headlines in March when it announced a provincial ban on cellphones during instructional time beginning in the 2019–2020 academic year. The announcement stated that cellphones can be used for “educational purposes, as directed by the educator.”

Cellphones may also be used to assist students with special education needs and for health and medical purposes. Each school board must ensure its policies align with the provincial standards, the government announcement said.

Changes are also happening in other provinces. Elk Island Public Schools, which represents 43 schools in Alberta, announced a new policy to take force in September 2019. It explains that during the school day, cellphones and personal electronic devices are banned for K–6 students. Devices are allowed for Grade 7–9 students during breaks or at lunch—although teachers may allow them during class for specific educational activities. Similarly, devices can be used during spare periods for Grade 10–12 students. Students in any grade with an identified medical or inclusive education need, however, may use cellphones in class.

“I think it’s really a double-edged sword in terms of usage,” says Sam Liu, an Assistant Professor at the University of Victoria who is studying the impact of different cellphone policies on middle school students. Some schools in Victoria ban cellphones entirely.

“I think it’s really necessary to teach kids the self-regulation skills, because this is the first time they are using these cellphones or receiving these smartphones. There needs to be some kinds of teaching and having them aware that certain types of usage can be detrimental to their health and well-being,” Liu says.

Teachers need to be bold and persistent with helping students regulate their cellphone use, while communicating honestly about the impacts of cellphones.

“Try anything. In my opinion, you can’t do nothing. You’ve got to do something,” says Matthew Acheson, a teacher at St. Mary’s High School in Kitchener, ON.

“The kids that are most likely to be distracted by phones are the ones that can least afford to be. [If] students who are… close to disengaging from school [have] a phone, this is where [they’ll] end up—on their phone,” he says.

Acheson sometimes uses phone cases from the company Yondr. The cases lock the phones so they can’t be used, although music can still be played. This way, phones aren’t confiscated, but they definitely can’t be used either. Some classes resist for a few days, but then eventually accept the idea and their grades improve, shares Acheson.

Yondr hasn’t worked for everyone; some students spend the class trying to break into the cases. But Acheson has other methods for when this happens: he puts students’ phones in envelopes marked with their name and stores them in a locked toolbox during the class.

Acheson believes teachers must stay on top of students’ cellphone use if monitoring them will be effective. Ultimately, though, he explains these procedures save time.

“It doesn’t take a lot of time away from the class,” he says, noting how quickly phones are stored away. “In fact, it probably saves time because you’re not constantly policing phone use. The classroom teacher has to decide that it’s important. For me, it’s definitely improved the learning environment.”

Some teachers, however, believe that an improved learning environment doesn’t necessarily require a total ban on cellphones.

Jamie Mitchell, a teacher with Ontario’s Halton District School Board, decided a number of years ago to stop confiscating cellphones in class. The high school math teacher realized one summer day how much time he spent confiscating phones during class, and how little it accomplished. The next September, he told his students they could use their phones in class, but they needed to be out on the desk where he can see them.

“I realized there were more important conversations I could have with my students,” he says. If he saw students using a game, he’d ask them to consider how math principles applied to it. He directs them to apps that can help them learn. If students use phones inappropriately, Mitchell asks them to put the devices facedown on their desk. He confiscates about one phone a year, he says.

“Those cases are rare,” Mitchell says. “I’ve really noticed as a teacher, as soon as I started teaching kids how to manage themselves and their own device time, the amount of disciplining I had to do around cellphone use went way down.”

Teaching students how to regulate their cellphone use requires having students examine why they use them so much.

“You just so clearly see that they have this strong feeling that they will miss out on something if they’re not following so-and-so and so-and-so,” says Calvin Van Eek, a social sciences teacher at Waterloo Oxford District Secondary School in Baden, ON. Van Eek began teaching more than 20 years ago after working in the addictions and mental health field.

“[Cellphones] tap into some fundamental human needs,” he says. “Theoretically, [students] agree with me that they shouldn’t be following some [negative] people, and that they’re just perpetuating things by doing [so], but at the same time they are so reluctant and resistant to the idea of removing themselves,” says Van Eek, who thinks the nastiness students experience on social media is the most damaging part of their technology use.

He discusses cellphones and social media in philosophy classes. Sometimes, he tries to have students think about how their devices are subtly controlling their behaviour. He has also seen students begin to remind each other not to use phones as often.

Such interactions may become the new normal at R.F. Staples Secondary School in Westlock, AB. Beginning September 2019, students won’t be able to have their cellphones out during class, although they can use them during lunch or breaks. (The school is not part of the Elk Island School District that will be implementing its new board-wide policy in September.)

Wayne Rufiange, school principal, says he became concerned that students’ constant reliance on cellphones was hurting their ability to interact with each other and solve problems, contributing to anxiety and decreased mental health. He shares that students often aren’t using their phones in class for educational reasons anyway, and there are other technologies they can use besides cellphones.

“If I look at the big picture, [removing cellphones is] that opportunity for kids to be unplugged for a while, get away and focus on their studies, [and] not be so distracted by what other people are doing. [It’s also an opportunity] to just be in [the] moment and be mindful of what’s happening around them,” he says.

Rufiange says he finds it “disturbing” that our current culture teaches students to expect a lot of social media likes in a short amount of time. He also wonders if the constant ability for them to communicate with their parents when there is a problem impedes their ability to solve problems on their own; if their ability to always connect with people contributes to anxiety.

Rufiange and his staff can’t change cultural expectations entirely. They can, however, foster something different in their school. If students don’t have cellphones in class, it might be easier for them to discuss what they’re learning, he shares.

Maybe, says Rufiange, less times on phones will help them “get to know their classmates in more detail than what’s happening on their Snapchat story, their Instagram page, have a real conversation instead of a digital conversation.”