SOGI: Getting the Terminology Right 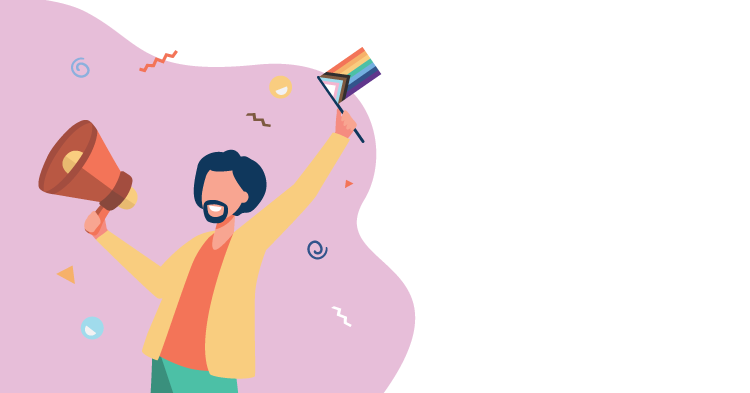 Gender fluid. Two-spirit. Trans. Cisgender. These are some of the terms students can use to describe themselves and where they are on the spectrum of sexual orientation and gender identity. Although the language may be new or unfamiliar, experts say that teachers need to be open to using and hearing it so they can acknowledge their students’ identities.

“There’s no room for discrimination in our schools and teachers know that,” says Chanelle Tye who works for the LGBTQ+ education program SOGI 1 2 3 as a British Columbia education lead. “I think an important thing for educators to remember is that sitting in front of you are students who are different from you, and who need to feel that they belong. And we know that when kids feel belonging and connectedness at school, they succeed not only at school, but outside of school. So I think regardless of what your personal beliefs or understandings are, as an educator you’re mandated to create safe spaces for students, and I don’t think anybody is against that.”

SO stands for sexual orientation and GI stands for gender identity. SOGI 1 2 3 is a program created by the ARC Foundation (Awareness. Respect. Capacity.) in Vancouver, in collaboration with the BC Ministry of Education; the British Columbia Teachers’ Federation; school districts across the province; the University of British Columbia (UBC) Faculty of Education; other education partners; and LGBTQ+ community organizations. The program also operates in Alberta and has plans to expand across the rest of Canada.

As somebody who works with educators, Tye explains that although the idea of using inclusive language may seem intimidating, especially to those who are unfamiliar with the terminology, it’s a perfectly natural starting point.

“The first step is to let the curiosity grow in you, and not be ashamed to not know. That’s the first thing I would encourage educators to do,” she says. “The trick is that the language evolves. I’ve been doing this work for a while and honestly, every day that I’m with students, I’m learning something new.”

Catherine Taylor, associate dean of arts and director of the RISE (Respect, Inclusion, Safety, Equity) research program on LGBTQ-inclusive education at the University of Winnipeg, believes that simply being open to speaking about sexual orientation and gender identity topics is the key to communicating with students.

“No one knows all the terms because [they’re] shifting sands. We’re in a time of tremendous social change on this topic. I’m sure I don’t know all the identity labels people use to describe their sexual or gender minority positions. It is important to know the basics. Students won’t be angry with a teacher for not being up on all the latest terminology. What they want to know is that you’re on their side and you’re not treating their human dignity like some kind of moral issue that’s open for debate,” she says.

Taylor suggests that basic terms a teacher needs to know are gay, lesbian, trans, queer, and two-spirit. “Historically, two-spirit people had a very, very honoured place in most Indigenous communities. They were regarded as spiritually gifted people who were capable of living outside of conventional gender roles in order to be true to their own natures,” she says. Historical reverence for two-spirit people hasn’t extended into the modern world and those who identify as two-spirit are often subjected to “homophobia and transphobia in their own home communities, and if they’re in urban settings—they experience racism. They probably experience poverty in both settings.”

Taylor is the lead author of two key studies on the topic of inclusivity in Canadian schools: Every Class in Every School (that surveyed students across the country about homophobia, biphobia, and transphobia) and The Every Teacher Project (that asked teachers about LGBTQ-inclusive education).

According to those studies, teachers using inclusive language or referencing sexual orientation and gender identity could positively affect how students feel in the classroom. “The problem of homophobia was found to be widespread, but not very deep. That is, we saw statistically that smaller interventions by teachers could make a big difference. They made a difference to how much harassment there was and how resilient queer students were in the face of that harassment,” Taylor explains.

For example, Taylor says that even hearing one or two positive references to LGBTQ+ topics over the course of a year could improve students’ experiences at school and make them feel less alienated or othered or harassed. “It might just be the teacher was talking about the development of the Charter of Rights and mentioned that same-sex rights were read into the Charter at a particular point in time. Or it might be that a teacher says, ‘Happy Pride Day’ one June. It makes a difference between something and nothing for a queer student to have that one mention from one supportive teacher, although of course that’s not all we want to see.”

Even with younger students, teachers can be conscious of using inclusive language—or at least not using language that enforces binary or heteronormative stereotypes where, for example, a family only includes a mother, a father and children, or where boys and girls are very different from one another with very different preferences.

“For many years, teachers started the day by saying, ‘Good morning boys and girls,’ but that’s one of the most basic things we can do—we can change our language,” says Steve Mulligan, a SOGI co-ordinator at the UBC Faculty of Education. Mulligan is also a seconded teacher from the Vancouver school board who is currently working with students in Grades 6 and 7.

“You know, we would never start a class by saying, ‘Good morning Caucasians and other ethnicities,’ because we understand that ethnicity and race is complex, and that students identify differently and have mixes, and gender is not that different. Certainly, most people do identify as cisgender, meaning that their sex assigned at birth matches their gender identity, but many don’t. And gender can be complex. So why are we going through the world reiterating and teaching kids from a very early age that boys and girls are so different that I’m going to start every day by saying ‘you and you’ and not leaving any room for anybody who is in the middle?”

Mulligan explains that even splitting students into boys sports teams and girls sports teams can send a message that skills and interest in sports are dictated by gender. The same thing can be said about colour-coding toys pink and blue for girls and boys, or even referring to toys as “boys toys” and “girls toys.”

According to Mulligan, it is especially helpful if teachers understand the differences between sexual orientation and gender identity. He explains the easy way to think about them is that sexual orientation is in the heart—it is who a person loves romantically and is attracted to—whereas gender identity is who a person is in their head and how they define themselves internally.

Alex Abramovich, an independent scientist with the Institute for Mental Health Policy Research (IMHPR) at the Centre for Addiction and Mental Health (CAMH) and an assistant professor at the University of Toronto’s Dalla Lana School of Public Health, explains that getting people’s pronouns right is important. He suggests that teachers should understand the concept of gender expression as well. This has to do with externals—the way a person presents their gender through things like the clothes they wear, the way they style their hair, or even their body language. It could also be evident through the choice of their name or the pronouns they use to refer to themselves. “Everybody wants to be respected. Everybody wants to be called by the name that they go by, the name that they identify with. You want to be referred to in the way that you identify.”

Students may also identify as both, as trans, or as transgender (not transgendered), which Abramovich explains is “an umbrella term to describe people whose gender identity does not match with the sex they were assigned at birth.”

Assigning a sex at birth essentially means classifying a baby as male or female based on its genitalia. In written language, these terms are commonly rendered as AMAB (assigned male at birth) or AFAB (assigned female at birth).

To prevent any “misgendering,” Abramovich suggests always asking what pronoun the person prefers. Actions like these—being respectful of students’ identities and the language they use to define themselves—are necessary to ensure that schools are creating safe spaces for their students.

“If you’re forcing them to identify in a way they don’t identify, that’s actually dangerous. It’s dangerous for their mental health—especially for a child who does not identify as a boy or girl. It puts them in a place where they are automatically “othered” and they feel that they don’t belong. It affects their mental health. It affects anxiety, depression, suicidality,” says Abramovich.

Trans youth, he explains are especially vulnerable to suicide, but that vulnerability can be lessened through supportive networks, including supportive teachers in the classroom.

Even if a teacher is uncomfortable using inclusive language or talking about concepts that revolve around sexual orientation or gender identity, or using a student’s preferred pronouns, it is important to make the effort to do so, if only to match the efforts made by students.

“Remember that it takes a lot of gumption and a lot of guts for a student to ask for something different, to be brave enough to say, ‘actually, here’s what I’d like.’ So keeping in mind that human being, that beating heart, in front of you is kind of paramount to the whole pronoun question. And I promise you, you will get used to it. It gets easier.”

Teachers have the opportunity to become the tour guides on this mutual journey with their students. With a sense of humour, understanding, and sensitivity, the path need not be rocky although challenges will crop up from time to time. Plenty of resources and tools are available as markers to ease the way.

Carolyn Gruske is an award-winning reporter and former magazine editor. She often writes about the intersection of business, technology and the law, but she also has a deep interest in educational topics.