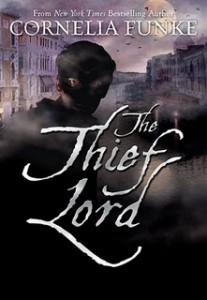 The Thief Lord tells the tale of Prosper and Bo, two orphaned brothers who have run away from their aunt and uncle. When their mother was still alive, she often spoke of Venice as a magical city, and so the two boys decide to flee to Venice.

There, they meet the Thief Lord who runs a ring of street children who dabble in petty crimes, in the Oliver Twist style.

The two brothers become close with the Thief Lord and the other children in his colourful family, but they quickly discover that the Thief Lord has a dark secret. Soon Prosper, Bo, and the rest of the gang are thrown into circumstances beyond their control. They embark on an adventure throughout the meandering canals and narrow alleyways of Venice.

This modern classic has become one of the most popular children’s novels of the past decade. It has the perfect mix of adventure, mischief, magic, and friendship, and is bound to keep your students turning pages.