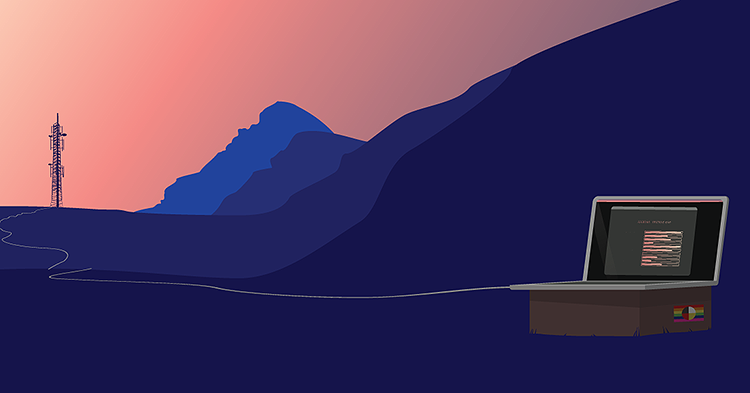 As a kid, I only ever saw my community, Tyendinaga Mohawk Territory, make headlines when there was a highway or railroad blockade. The public knew us for protests, cigarettes, and gas. Even from a young age, I knew there was more to that story and there still is.

Most media content about Indigenous communities are created by non-Indigenous people, for their consumption. This leads to the reproduction of the stereotypes we’ve seen time and time again. Accomplished Anishinaabe reporter, Duncan McCue, coined the WD4 rule, which has become ubiquitous in the Indigenous journalism world. In a CBC article, he shares the story: “An elder once told me the only way an Indian would make it on the news is if he or she were one of the 4Ds: drumming, dancing, drunk or dead.” (He added the “W” for warrior.)

In 2011, Professors Carmen Robertson and Mark Anderson co-authored Seeing Red: A History of Natives in Canadian Newspapers, an examination of Indigenous representation in Canadian newspapers from 1869 to 2009, and will be releasing an updated version in 2021. “Things have not improved that much,” Robertson said on CBC’s Unreserved in November. “The stereotypes that we found in the nineteenth century are still being reproduced but maybe different descriptor words are being used.” The updated book will include contemporary examples, such as the reportage around Cree Red Pheasant First Nation resident, Colten Boushie’s death, in 2016.

Retired journalist and Professor John Medicine Horse Kelly and Professor Miranda Brady argue in their book, We Interrupt This Program: Indigenous Media Tactics in Canadian Culture, that “whoever controls or subverts the content matters in the meaning-making process, as do varied audiences and modes of production access, and circulation.” We can’t rely on one source or medium to reach people.

Within the classroom, it is important to share content that doesn’t position Indigenous people in the past but brings them into the present and future. The division between Indigenous and non-Indigenous people in Canada grows smaller through education, where those who have been dehumanized are now seen as whole people, with beautiful cultures, amazing senses of humour, artistic talents, and voices with important things to say. The places to find these voices are not within mainstream texts but within spaces where the non-Indigenous teacher or student may be taking the seat of the one feeling “othered.” But that is where the real learning starts—with listening.

I am a part of the younger generation who are claiming space for ourselves on our blogs, podcasts, online marketplaces, independent news outlets, and social media. We start this journey not on our own, but on the backs of amazing storytellers: grassroots journalists, rez radio hosts, writers and knowledge holders who self-published and shared education, language, and cultural resources across communities, Indigenous activists, artists, and even our hilarious uncle. Building upon our tradition of storytelling, entrepreneurship, humour, activism, and passion for our languages and cultures, we are asserting our voices across the Internet to declare, “we’re still here!”

“I felt for a long time that Indigenous folks were on this huge hiatus and observing the Internet, not sure how we would go about putting our native spin on things,” says Skye Durocher, who created her first meme account on Instagram for a Cree language class, in 2018. Durocher, a Métis and Nehiyaw woman from Alberta and the “Cree-ator” of @Cree.language.challenge and @Cree.okimaw.iskwew (which means “Cree boss woman”), has definitely found a way to put her spin on things. She says that she creates her posts for Indigenous people and describes her sense of humour as “rez.”

Memes are often based on images from pop culture such as television shows and movies, which unfortunately still lack representations of Indigenous people. Pages like Durocher’s can be spaces of healing for Indigenous people, where we can discuss shared trauma, foster identity, and fight isolation. “We create these memes to talk about serious issues as well,” says Durocher. “It is a way to inform younger people about what is going on within other nations and start a conversation about current and systemic issues.”

Sometimes humour is the best way to point out the absurdities in life. No one does this better than Walking Eagle News, a satirical online news outlet created by Tim Fontaine, who cheekily identifies himself on his website as, “a real journalist for almost two decades before becoming a pretend journalist.”

Fontaine, who covered Canadian Politics and Indigenous Affairs for APTN and CBC Indigenous, among others, started turning his Twitter jokes into satirical news articles after leaving the journalism world. On any given day, you may read headlines such as: “Parliament Hill Skating Rink to be melted to provide drinking water for First Nations” or “Canada’s largest reconciliation manufacturer warns shut-down imminent if blockades continue.”

“Canada to present full-grown Indigenous man to Royal Couple as engagement gift,” came after the engagement of Prince Harry and Meghan Markle. I shared this article on Facebook, and a classmate of mine, who thought the story was true, became enraged. In less than 20 words Fontaine can point out something so poignant about Canada’s relationship with Indigenous people that readers take a moment to think about whether it could be true—and that’s powerful.

If you’ve spent time in Indigenous communities, you’ve probably heard of the “moccasin telegraph,” or plainly, sharing the news of the day through word of mouth. Now, Indigenous communities are utilizing social media to connect, unite, and mobilize. In 2012, the Idle No More movement spread across the Internet. In 2020, we see those tactics being used in the mobilization of Indigenous and allied communities across Canada standing up in solidarity with Wet’suwet’en traditional chiefs’ opposition to the Coastal Gaslink pipeline on their traditional territory in, what is now called, British Columbia.

In 2018, Information, Communications, and Society published the analysis of 1650 #IdleNoMore tweets shared between July and August of 2013. The researchers argued that “social media provided opportunities for #IdleNoMore tweeters to engage in wide-ranging forms of political and civic action or, from a broader perspective, political protest that was deeply informed and, to a certain extent, influenced by references to Indigenous culture.”

However, the Internet is not always a safe place for us. Because of the persistent stereotyping of Indigenous people in media, not to mention the amount of violence our communities continue to face, our social media feeds can sometimes feel like a sad and overwhelming place. This became so apparent, in fact, that in 2015 CBC made the decision to completely close and re-evaluate the comment section on all Indigenous articles shared on their platform because commenters were disproportionately violating their guidelines by spreading misinformation, ignorance and sometimes hatred and racism toward Indigenous people. Many Indigenous people have carved out their own community in the online world, just as in the physical world.

Indigenous broadcasters, especially those in Northern Canada, have maintained their sovereignty and self-determination by remaining unlicenced, so it’s not surprising that our oral storytelling cultures have translated so well into the do-it-yourself world of podcasts. CRTC research analyst, Julia Szwarc, says that “the origins of community radio can be traced to isolated Indigenous communities and ‘trail radio’ in the 1960’s.” Some Indigenous podcasts, like Connie Walker’s acclaimed Missing and Murdered: Finding Cleo series, have been widely celebrated (and, in this case, downloaded more than 10 million times). But you can also catch Indigenous voices talking about a whole spectrum of topics, from science fiction through a decolonial lens on Métis in Space, to art and culture on Anishinaabe comedian Ryan McMahon’s “Ten Times Around the Sun,” The Red Man Laughing podcast, or listen to Kahentinetha Horn tell stories of her life to her daughter, Kaniehtiio, on Coffee with Ma.

“I think a lot of Indigenous people are brought to social media because it truly shows the power in our collective communities and experiences,” says Michelle Beauséjour, the Métis artist behind the jewellery company @thebirchtrail. She believes that digital entrepreneurship completely changed her ability to share her work. “Growing up in a city center and away from community made me feel isolated in my experiences. Now global platforms have instead brought a broader community together.”

Auróra Lamphere, who identifies as a mixed race Indigenous woman, says that Beauséjour was one of the many supportive Indigenous artists she met when she started her brand @reclaiming_roots in 2017. “We’ve found a place of belonging online, where no one asks your BQ [blood quantum], no one chastises you if you can’t speak your language, or if you need help learning traditional skills you never had the opportunity to learn at a younger age,” says Lamphere.

Through new information technology, contemporary Indigenous cultures (including places where they intersect with the mainstream) are not just accessible—they’re flooding in. Never before have so many diverse experiences been shared through so many different modes of communication. “We’re a new generation who is striving to reclaim our old ways,” says Lamphere, “and we do it by creating our own little online community.”

Shelby Lisk is a multidisciplinary artist and journalist from Kenhtè:ke (Tyendinaga Mohawk Territory). She currently lives in Ottawa, where she works as a multimedia journalist, capturing news and current affairs stories that affect Indigenous communities across the province.