Ellie never met her mother, she died when Ellie was young. Ellie’s father is forced to take a job as a travelling salesman with the Marvelous Cookware Company in order to support them both.

So, while her father travels and sells in hopes of making ends meat, Ellie is forced to stay with a very bitter grandmother who doesn’t want her around- or at least that’s how it seems. 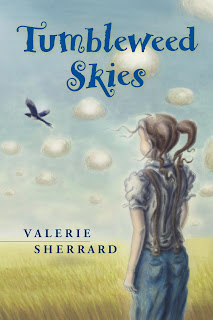 Grandmother Acklebee has had a hard life, with many disappointments, but Ellie only begins to understand why that is near the end of her stay.

The story takes place on a farm in the middle of the praries near Moose Jaw, as wide as the sea and as dusty as a desert.  Grandma Acklebees farm is dusty, faded, old and sun-baked. Ellie’s grandmother makes Ellie do numerous chores, often working all morning before having a chance to sit down.

Uncle Roger is Grandma Acklebee’s only son, and Ellie’s only relief and her only friend, despite there being a little girl a few farms away who Ellie occasionally gets to play with.

Written from the perfect view-point of a child, with funny emotions and immature details and thoughts, this novel is bound to have kids hooked and charmed within the first chapter.

Ellie makes it through her time at the old faded farm, and while she’s there, Ellie learns quite a lot about her Grandmother Acklebee and her own mother, but even more important, Grandma Acklebee learns about herself.