Model UN and The Art of Diplomacy 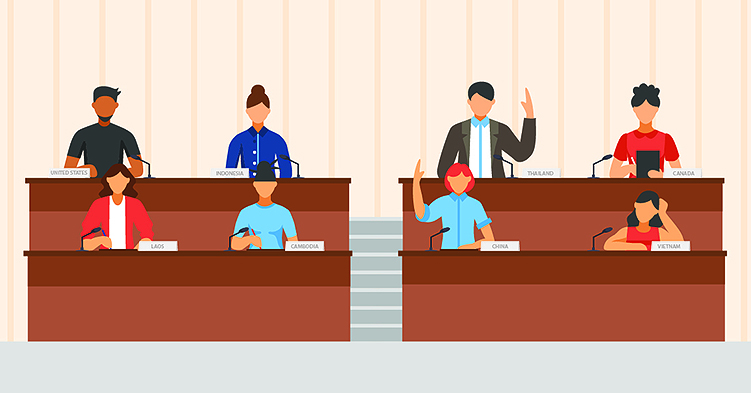 In the first five years under communist rule in South Vietnam, Cambodia, and Laos, nearly 1.3 million people decided to abandon their homes and flee their native countries. An outflow of refugees on a scale the world had not witnessed since World War II, an exodus of Biblical proportions. What will the world do about it?

The Model UN Club found me in 2013 in the shape of two very keen grade 9 girls making a pitch to me at lunch about the need for more women in politics. I didn’t quite understand what I was agreeing to, but they had me at “women in politics.” I have been the staff sponsor ever since, and have loved to watch this club grow into the largest club in the school. It has been called “sports for smart kids,” and is experiential collaborative learning at its finest.

The goal of the club is to prepare for conferences. At a Model UN Conference, students become “delegates” where they must roleplay as a specific country, in a specific UN Committee (General Assembly, World Health Organization, Disarmament and International Security Committee, United Nations Development Programme, etc.). There, they are presented with a real-world crisis that they must collaboratively solve in the form of “resolutions.” To participate in just one conference, delegates must conduct research, collaborate, negotiate, lead, and speak publicly.

Model UN kids are passionate about attending these conferences and in recent years we have also run several simulations in my classroom during lunch time; the most popular being the Halloween-themed “zombie apocalypse.” It inevitably gets a bit silly but is also great for recruiting students from the lower grades. We now order custom-made hoodies, and have a large wooden sign hung in the window of my door that was made by a senior student.

You would think that the long unpaid weekends away at conferences, making sure the kids are alive and well would be a burden to me. But I actually enjoy listening to them regale me with tales of competition, annoyance at the Dias (the moderators of the committees), and the drama of their committees. Seeing how proud they are of themselves not only when they win awards, but in what they accomplish during the conference is such a joy for a teacher. I loved when a new grade 8 student told me she sponsored a resolution, and even though she was nervous, stood with the team to present it.

Due to the passion that seems to be inherent in the MUN club, and the deep cooperative learning at conferences, I have wanted to incorporate MUN into my classroom for a while. I found my opportunity in the grade 10 social studies curriculum, when I expanded on the Vietnam War due to student interest, and stumbled upon one of the largest refugee crises in history.

My students’ goal would be to act as the United Nations High Commissioner for Refugees (UNHCR) and solve the problem of the Southeast Asian refugee crisis of the 1970s and ’80s. I would take all 3 MUN blocs (comprising a total of 120 students) to Asia Pacific Hall at the Wosk Centre for Dialogue in Vancouver for the entire day, with the hope that they would manage to write and pass a viable resolution.

I learned, however, the Model UN can mean more to students than I thought, and in a way that isn’t gradable. How can you put a numerical value on the moment when the usually very shy student comes to me during a break, beaming and asking if I saw her speak on the microphone, and if I was proud of what she said? Or when a student with an extensive Individual Education Plan (IEP) is given the opening statement of his delegation because his group wanted to make sure I “gave him a good mark,” and when he sat down he was high-fived by two group members on a job well done?

Even the self-esteem that came from dressing up was a factor. The boys, in particular, wanted me to see their new suits—you could tell they were feeling pretty dapper—and a few of them told me that their fathers had taken them out shopping just for the occasion.

Students were graded on the quality of their country’s participation and their position paper. It was harder to grade the live performance than I thought because I kept getting distracted watching them debate each other. I loved hearing their passion, and watching them become so confident in their roles that they were able to throw barbs at each other across the room. “The delegation of China would like to remind the delegation of Thailand that it is hypocritical to lecture us on ethics when they have been pushing the refugees back into the ocean to be murdered by pirates!”

Initially, many of my students thought it would be easier to give the ethical answer that refugees should, of course, be helped. They learned, however, how challenging it actually is to follow through on that level of altruism. They had to take into consideration geography, internal and external economics, the political spectrum, alliances, and history; not to mention their classmates’ personalities and the innate desire to “win.”

During unmoderated caucuses, students found themselves shouting at each other about economic policy and historical alliances, and I got to overhear retorts such as, “I don’t care if it’s a good idea! I’m not sponsoring it! You nuked us, twice!” Each delegation wanted their sponsored resolution to be the one that got passed at the end of the day, even though it wasn’t worth extra marks.

They were so into it. I remember at the lunch break I ran into a large group of students at the same ramen restaurant the other teachers and I had chosen. There they were holding a “secret meeting,” hoping that only they had thought of collaborating at this time. The main feedback I received from my students was; even though we were at the Wosk Centre for five hours, they wished they had more time.

Their final resolutions were multi-faceted and included elements such as funding for the Orderly Departure Program, an Arranged Passage Initiative for expatriates, a program to train refugees in relevant economies so they can be better integrated into their host country, and a humanitarian effort to ensure refugee camps are safe and refugees are properly registered.

How did I pull this off? The entire unit had to be scaffolded around the Model UN conference. Besides the obvious historical content to set the stage, before the main event, students were individually required to turn in a position paper, to ensure that they had each done a minimal amount of research about the stance of their country before going into committee. I scheduled a few work block days for kids to get their heads around who might be good allies, and to create an online “resource binder” of everything they could possibly need in committee: legal documents, acts, articles, basic information on themselves and other countries, and ideas for resolutions.

We also practiced basic Model UN speaking decorum in class by announcing our favourite candies: “The delegation of x would like to state that our favourite candy is x, because…” and then attacking each other’s decisions. But nothing could really prepare the students for the moment they walked into the Wosk Centre early that morning. Or when they realized the microphone in front of them was on and they were expected to say something intelligent. One student, in awe at first seeing the expanse of the room, quipped, “Selzer, this is legit!”

So, why go to all this trouble? Kids might joke that “MUN is FUN!” but Model UN also fosters skills of leadership, problem solving, and cooperation. Many Model UN kids go on to university to study Political Science, and take up the mantle of activism. But no matter what field our students enter, in this era of globalization, they will have to interact with people from all over the world with diverse worldviews. Problems halfway around the world directly impact our lives and our communities. If our world needs anything right now, it is empathetic, creative, critical thinking young people who have learned how to influence and negotiate, and are passionate about making a difference.

Jessica Selzer has been a Social Studies teacher at Rockridge Secondary School in West Vancouver, BC since 2010, and staff sponsor of the Model UN club since 2013.