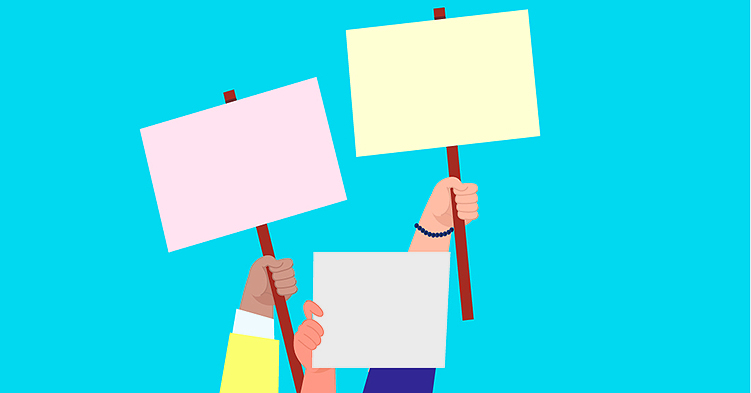 Many of us likely take basic universal human rights for granted. Yet in a legal sense, human rights have existed for less than 75 years. When the Universal Declaration of Human Rights (UDHR) was proclaimed by the United Nations (UN) General Assembly on December 10, 1948, it drew a distinct starting line for a large body of international human rights laws, including here in Canada.

Canadian lawyer and scholar John Peters Humphrey became director of the UN Division of Human Rights in 1946 and played a key role in drafting the UDHR. In Humphrey’s time, Canada was apathetic (and in some cases politically opposed) towards implementing such laws. Since then, interest and commitment has grown and in many respects Canada is touted as a leader in human rights. But we can’t let that success overshadow the fact we’ve got a long way to go in certain areas.

Humphrey was a young law professor at McGill University and was known as an authority on international law. He was born in Hampton, NB, and by the age of 11, he’d lost both parents to cancer and one of his arms due to a fire. As a result, his young life was filled with taunts and bullying. At the age of 15, he started at Mount Allison University, in Sackville, NB, but soon moved to Montreal where he lived with his sister and began what would become one of four degrees at McGill University.

His interest in commerce turned into a passion for law and politics. Upon graduating law school, Humphrey went to Paris on a scholarship and became even more entrenched in international law. When he returned home, he began teaching at McGill and received his Masters in international law. As a member of the arts community in Montreal, he ended up meeting French refugee Henri Laugier who would later become assistant secretary-general at the fledgling UN in 1946. It was Laugier who recommended Humphrey as director of the UN Human Rights Division.

The human rights commission included 18 members of different legal and cultural backgrounds from several countries, including Lebanon, China, France, and Australia. It was chaired by former first lady Eleanor Roosevelt. The team had the difficult task of creating a human rights declaration that all countries could hold as their own, transcending politics, religion, and culture. The UDHR is a direct response to the atrocities committed throughout the Second World War. People around the globe were horrified by what took place throughout the late 1930s up to the mid 1940s, and world leaders did not want the grisly events to repeat themselves. The goal of the commission was to create a road map to guarantee that each individual on the planet would have their rights clearly defined and defended.

Humphrey worked as the principal author to draft the UDHR’s 30 articles, which fall under two traditional divisions: civil and political rights; and economic, social and cultural rights.

The articles run the gamut, from freedom of opinion and expression, and the right to vote, to the right to fair wages and safe working conditions, and the right to speak your native tongue. The first two articles address equality and freedom from discrimination. The third and fourth articles focus on liberty and life free of servitude. While many countries do not overtly legally support slavery, subjugation is still a hot-button issue, where servitude has shifted from one person owning another to a more insidious system of under-paid (and often dangerous) labour.

Articles 6 through 12 deal with law, representation before courts and tribunals, and penalization. Articles 13 through 17 address freedom of movement from country to country, the right to own property, to seek asylum, the right to start a family and practice any religion you choose. Thoughts, opinions, and the right to expression and participation in government process show up in articles 18 to 21.

The right to work, pursue goals, the right to take holiday and leisure time are all addressed in articles 22 to 24. Article 25 is about adequate standards of living, so essentially the right to live out of poverty. Article 26 is a long one, all about education. Article 27 looks at arts and culture. Articles 28 through 30 essentially underline that every person is free to live life as they choose, so long as it is in a responsible and non-harmful manner that does not contradict the UDHR itself.

Those first two articles form the basis for Canada’s 1977 Human Rights Act, and also inspired our 1960 Bill of Rights and the 1982 Charter of Civil Rights. But we didn’t reach that point in a unified or straightforward manner. In 1946, while Canada was denying due process to suspected spies and disenfranchised Japanese Canadians, the UN announced its intention to draft the UDHR. Politically, the announcement caused concern and disinterest.

In 1948, Humphrey wrote, “I knew the international promotion of human rights had no priority in Canadian foreign policy.” Indeed, initially political naysayers included members of the federal cabinet and the Canadian Bar Association. But feeling pressured by allies—and wanting to avoid voting alongside unfavourable groups like Saudi Arabia, the Communist Bloc, and South Africa—Canada did support the final UDHR vote in 1948.

What’s more, the general population was apathetic toward the idea of international human rights laws. That apathy continued for more than a decade, until dozens of human rights and civil liberties groups were founded as part of the global human rights movements of the ’60s and ’70s. Since then, Canada has steadily increased its commitment to the principles outlined by the UDHR.

Over the last 20 years we’ve shed a light on collective human rights, those that belong to groups of people, that cannot be exercised unless others also do so. This is one place where Canada excels. “Canada has been making inroads on LGBTQ+ rights,” says Rhoda E. Howard-Hassmann, Canada research chair in international human rights from 2003 to 2016. When the UDHR was proclaimed, rights of gay and transgender people were unheard of. Now, we are international leaders in the area of LGBTQ+ rights, even though they are not officially part of the UN’s declaration.

There are countries that even view these issues as forms of cultural imperialism, namely Russia, parts of Eastern Europe, and certain areas in Africa. “Forty years ago, it was women’s rights. Now, LGBTQ+ and especially trans rights are the new scapegoat,” Howard-Hassmann says. So, for example, when a foreign aid package specifies the need to support the LGBTQ+ community or the Prime Minister makes a speech that verbally supports those communities, it’s often labelled cultural imperialism by the local government.

What’s more, we have not backtracked on political and civil rights. We have (comparatively) good voter registration. We are often cited as a leader in the field of refugee rights and a model for other countries to follow: Canada received the 1986 Nansen Medal for “the major and sustained contribution made by the People of Canada to the cause of refugees.”

But that specific accomplishment took place more than 30 years ago and now we Canadians are a bit too quick to pat ourselves on the back. “We congratulate ourselves for taking in over 40,000 Syrians,” says Howard-Hassmann. “And that is better than zero, or 10,000. But the governments that currently house 700,000 refugees are middle- to low-income countries.” Safe to say, it’s not a sustainable, equitable, or ideal situation. “Now, I agree it’s best to keep people close to home,” she continues, “but I think Canada could take more.” Not only are people fleeing their homes due to war, violence and persecution, but also due to environmental changes. By 2050, there will be an estimated 200 million climate refugees fleeing scorching heat, drought, and rising sea levels. This is a pressing international issue Canada must address.

The area of human rights where Canada fails miserably here at home is Indigenous peoples’ rights. In 2007, the UN General Assembly passed the United Nations Declaration on the Rights of Indigenous Peoples (UNDRIP). At that time, Canada did not endorse the declaration. Nearly a decade passed before the government announced support for UNDRIP, spurred by the release of the Truth and Reconciliation Commission’s final report in December 2015, which listed ratifying UNDRIP as one of its calls to action.

In May 2016, the Trudeau government finally promised to support UNDRIP, though they did not introduce any legislation. Shortly thereafter, the government approved the Trans Mountain Pipeline extension, and Trudeau noted the First Nations impacted by the project do not have veto power over energy projects. This goes against an UNDRIP clause that says “free, prior and informed consent” of Indigenous peoples is required for matters that impact their communities. So far, British Columbia is the only province on track to translate UNDRIP support into real provincial law.

Many Canadians had high hopes for the Truth and Reconciliation Commission. Reparations are mainly apologies, plus museums, monuments, and financial reparations in some cases. “But the government will only apologize for things they won’t do again,” says Howard-Hassmann. “So they apologized for residential schools. We won’t do residential schools again. But they won’t apologize for poor education, higher rates of incarceration, poverty, and much more.”

“Indigenous peoples’ rights is the biggest failure. The next biggest is poverty,” says Howard-Hassmann. Access to food falls within that category. Canada has no national food policies. Food is heavily dependent on a patchwork of services that vary depending on the city, region or province. Furthermore, Howard-Hassmann says Canada falls down on article 25, which states that “everyone has the right to a standard of living adequate for health and well-being of himself and his family, including clothing, housing and medical care.”

It sounds like a no-brainer—of course every person deserves a good meal, a shirt on their back, a warm place to live, and care should they fall ill. But here in Canada “we adhere to minimal standards,” Howard-Hassmann says. Over the last few years, Canada has been fairly successful in pulling children out of poverty on a federal level. “But provincially, we are not providing adequate standards of living for all of Canada’s population.”

Canada’s third area of concern is people who are marginalized systematically. “On a legal level, we don’t have laws that discriminate, but of course that exists on a social level,” says Howard-Hassmann. However, if we address article 25 we can change that system. Things like universal basic income and universal childcare would go a long way to helping those most in need. “That would help a lot of marginalized people without other measures in place.”

Despite all the areas we need to improve, Canada should be proud that a Canadian lawyer, professor and scholar played such a pivotal role in the creation of international human rights. It was no easy task, and it has helped lay the foundation for countries around the globe to improve and implement human rights legislation, including here in Canada. What’s important is to keep looking forward and, as a population, strive to continue to improve life for all Canadians.