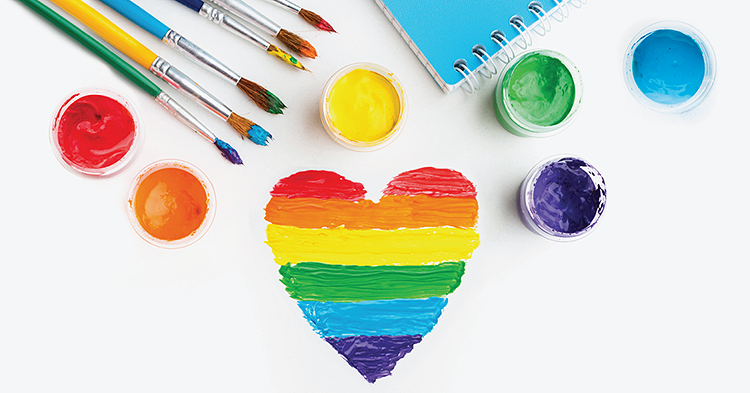 I started my teaching career at a public middle school in Toronto about two decades ago. At that time, I was not comfortable being personally out to my students. I recall that several students who noticed my short hair and square shoes called me “battyman” (a word I had to look up), which is derogatory slang for gay or homosexual.

The second school I taught at was a Jewish day school. At that school, I asked the Vice Principal, an Orthodox Rabbi, if I could bring some resources about same-sex families and anti-homophobia lessons into my classroom. The lessons had been created by the Toronto District School Board (TDSB). He said he didn’t want me to “confuse the students” by talking about same-sex families. However, after a student in my grade 4 class was called “gay” several times by his classmates, I received permission to do a lesson on name-calling. In the context of that lesson I also unpacked what it meant to be “gay.”

Towards the end of my seven years at that school, several teachers came to Pride Day and saw me dancing on a TDSB float for teachers. They were supportive and excited about it when they saw me in the staff room the next day.

Outside of the classroom, my partner Jessie and I met when I was thirty-three. We had our daughter when I was thirty-eight. We sent her to a public school in our neighbourhood. Even though it was a fairly large school, she was one of only a handful of children with same-sex parents. By grade 1, children started asking her questions about her family structure: “How can you have two moms?” “What do you mean you don’t have a dad?” She told us that one child even thought it was because her dad had died. She would explain it to them or say it was none of their business. But I could tell it bothered her.

We wanted our daughter’s classmates to have a better understanding of LGBTQ+ families and support the kids and teachers who might be LGBTQ+ or questioning. So when our daughter was in grade 2, Jessie and I asked to borrow a lesson our queer friend, Char Wiseman, had created for her son’s class. It was about the history of Stonewall and Pride. The lesson talks about the history of LGBTQ+ rights; telling the story in ways in which kids can understand and relate. It mentions examples such as, LGBTQ+ people not being allowed to dance together and women not being allowed to wear men’s clothes, and goes on to explain how LGBTQ+ people were arrested by police for doing those things.

The lesson was followed by an art activity where all of the students designed their own Pride flags. My partner adapted the lesson by adding pictures of our own family at Pride Day celebrations, as well as photos of the trans activists of colour who led the Stonewall Rebellion. Although I am a teacher, Jessie was so excited about the lesson that we decided she would present it to the class while I supported her.

The presentation was well-received. The teacher gave us a warm reception and, during the presentation, even disclosed that her sister was married to a woman. The students were very engaged and asked good questions. They all participated in the activity and paraded their flags outside the school.

Interestingly, the second time we tried to share this lesson, we experienced an initial pushback from the school. It was 2018 and the province of Ontario had abruptly repealed the current sex-ed curriculum that was more progressive and only recently updated. Educators were nervous. We had to meet with the teacher and the principal and address their concerns. The word “non-binary” elicited worry. The teacher also asked if it fit with the Health Curriculum for grade 2, even though we were presenting the lesson as just parents, not teachers.

In the end, the lesson was allowed to remain the same. This time, the students strongly identified with the theme of injustice and even made connections between homophobia and racism.

I think it is important that children learn about LGBTQ+ rights and history once they are old enough to understand it. My partner and I knew the teachers might not have the expertise or feel comfortable enough to teach this on their own, but we also knew that kids are ready to talk about these issues at a young age. Our hope is that teachers could increase their comfort level so that they can lean in to these important conversations.

There were numerous positive outcomes of this experience. One was the creation of a Pride Committee at the school, organized by Jessie and other queer parents.

We realized that Pride activities needed to be more central in the school. Both Parent Council and the administration were very welcoming of this initiative and even gave us a respectful budget to plan activities and bring in speakers. We were able to hold one event, bringing in an author from Vancouver, before the COVID-19 pandemic shut the schools down. This year, the principal even advocated at a Parent Council meeting for the Pride Committee to receive additional funding from the school budget, so we could plan virtual events for the students.

The lesson also had a strong impact on our daughter. During the pandemic, she helped organize a neighbourhood Pride celebration and wrote an article about it afterwards for CBC Kids News.

Last year was the first time I actually came out to students and used the Stonewall lesson myself—I even showed pictures of my own family celebrating Pride together. I was a Guidance and Learning Counsellor at the Linden School, a feminist girls’ school in Toronto. It felt good to finally be fully open about my family and identity and have this information be received so positively by students. I think it is so important for them to see role models that they know who are proudly queer and who have positive life experiences.

Elana Moscovitch has worked as a teacher and guidance counsellor, and is currently a Child and Family Clinician at Integra. She lives with her partner, Jessie, and nine-year-old daughter, Ma’ayan.