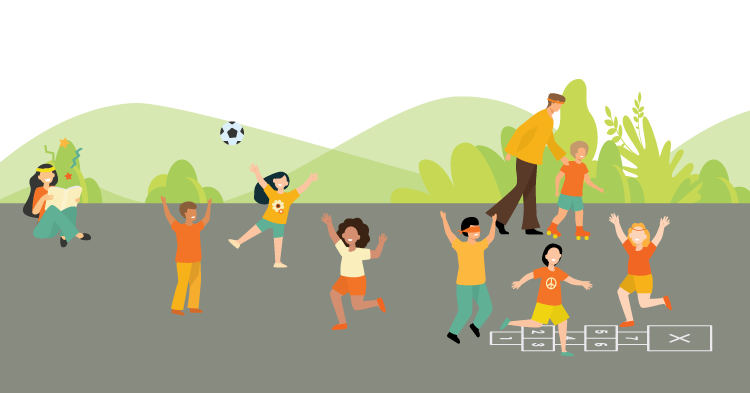 After 30 years of teaching and 14 years of being a parent, it wasn’t the books, the courses, or the counseling that would so clearly encapsulate the purpose of my job as an educator and a mom. It would be a 30-second video clip of a 10-year-old boy on a bike that would pierce my heart and show me what is really important in this world.

It was May of 2020, and I was scrolling through my emails after a long day of Zoom and Google Classroom. My eyes were getting bleary, so I took off my Telluride ballcap (brought out especially for our “wear a hat to Zoom class” day) and popped on my blue light glasses before checking one last email, from the parent of a student that I was a bit worried about.

The email contained a video of Jake, who was new to my school that year. Jake struggles with anxiety and goes to therapy for food aversion. And now, Jake stays home while his dad works on the front lines during the COVID-19 pandemic.

The video showed Jake attempting to ride a bicycle for the first time. It was a spring morning and the birds were chirping in the background, along with the sounds of the chimes on the front porch where Jake’s mom was filming from. I held my breath as Jake shakily took off down the driveway and wobbled slowly onto the road, then I let out a sigh of relief as he kept peddling. His blue jacket flew behind him like Superman’s cape, while his mom whispered encouragement the entire time. When Jake finally stopped and turned to look into the camera, he was beaming from ear to ear.

In that moment, Jake wasn’t the kid with anxiety or the kid with tactile issues. He was just Jake, a boy on a bicycle.

He was completing a series of tasks I had created on Google Classroom called, “Mrs. Kramer’s 1970s Childhood Challenge.” It was something I started a month into the pandemic. I was worried about all of the screen time my 4th grade students were being exposed to and wanted a way to get them off their screens and out of doors. It’s said that there is always a blessing in dark times, and this was it: my chance to share my 1970s childhood with 25 children of 2020.

Having grown up in the time before the digital craze, much of my own childhood was spent outside. Youth sports was not a “thing” yet. Instead, my friends and I played in the woods, built forts in the backyard, or rode around the neighborhood on bicycles (mine complete with a banana seat and fringe dangling off the handlebars). There were also the usual games of four square, tag, and kick the can, but we used our imaginations too and created plays and shows for our families. The common rule for children was to be home by the time the streetlights came on. That was it.

Could I effectively transfer some of that 1970s magic to my students? With parents pulling their hair out trying to home-school their children, and kids at risk of becoming virtual zombies, I knew I had to try. As a parent myself, I know the trick that if something is assigned by a teacher, it becomes law. Would that work in this case?

Each day I came up with an activity based on the weather or something special happening on the calendar such as Earth Day or April Fools’ Day. Then I would demonstrate part of the activity for the students. If I was baking bread from scratch, I’d show them the dough. If I was searching for seeds in nature, I would share a few that I’d found in the woods near my house.

Each challenge that was successfully completed would count as five points, and I kept a running tally of which students completed it. There would be a deadline for me to tally up the points, with the winner(s) receiving a prize. The prizes included things like a visit from me with a small gift or Starbucks gift card, or something for the student’s family to pick up during our designated “drop off/pick up” days at school. Yes, this was a little extra work, but it was so worth it.

I often received photographs attached to the students’ assignments, or even photo texts or emails from their parents. Jake was only the first in a long line of wonders from my 4th graders. Soon enough my inbox was flooded with pictures: Andrea reading in a soccer net in her yard, Mark displaying his homemade cookies with a big smile, Leanne standing at the end of a friend’s driveway chalking a message of hope, and Laurie proudly showing off a big bag of garbage that she collected in a local park for the Earth Day challenge.

Like the first buds of spring, the challenges blossomed and grew. Luke proudly planted a mini garden. Henry made mud pies. Julia wrote in her journal while sitting on her trampoline, taking jumping breaks in between each paragraph. Nicholas spent an afternoon reading beneath a tree in his backyard. Valerie actually got a letter back from her mailman and began a pen pal relationship, and Elliott found the most beautiful natural heart in a tree during his nature walk. Within a month, the kids were buzzing each morning, eager to know the challenge of the day.

Even parents were sharing their excitement about their children’s newfound skills and passions. They began making comments during the principal’s virtual “Parent Coffee” meeting about how grateful they were to have these assignments for their kids. A grandfather thanked me for the time he got to spend with his grandson building their own version of a tepee in the backyard during our Native American unit.

One parent said: “These activities allowed me to explore areas of interests I never knew existed within my son. We thoroughly enjoyed spending time together while delving into new and exciting adventures such as cooking, baking, setting a table, gardening, and nature exploration. Without this unit of study, I would have missed the opportunity to know my son in a way I hadn’t prior imagined.”

Many parents sent me messages about baking bread from scratch with their children. They said it reminded them of their own childhoods, and that now their families didn’t want to go back to store-bought bread. One parent commented that her daughter was actually eating the lettuce she’d planted during the Challenge and was now open to eating more vegetables. But it was the myriad of bicycle-riding videos that surprised me the most. Several parents wrote to me admitting that they simply hadn’t taken the time to teach their child to ride a bike yet.

That’s when I knew that these were more than just fun activities to pass the time in quarantine. They were a way to give kids a gift they didn’t even know they wanted or needed. A gift of time, of fresh air, of connection to the earth and values almost extinct. The benefits were far exceeding my expectations.

This past year was filled with what I’ve called “wartime teaching”: life and death going on all over the world and a hefty dose of fear each morning for our children. In this time of crisis, we need to ask ourselves, “What is most important?” In my opinion, the answer is fairly simple: read a really good book and write in a notebook every day. Do math problems, perform real science experiments, and then…get outside.

Now, after ten months of this pandemic and countless hours on my computer, I finally get it. As sure as I sit here, I know this to be true. The world will go back: back to work, to sports, to driving kids from activity to activity, to eating in the car, to falling into bed at night exhausted from all of the running. But I have one hope. My deepest hope for our children is that as life returns to normal and the children of 2020 grow up to become the adults who do the driving and the running, there is some small gem inside of them, a diamond of remembrance of 2020—the year the world stood still.

As educators, we know the research is clear that exercise and outdoor activity boosts standardized test scores, enhances attitudes about learning, improves behavior, and raises overall achievement. We know that being in nature lowers stress levels and gives children a deeper appreciation of the environment. My 1970s Challenge started as a way to get kids away from their screens, and ended up doing so much more. Breathing fresh air and playing outdoors gave kids (and parents) a much-needed reconnection to ourselves, each other, and the planet.

Kristina Kramer has been teaching grades 1-8 for 31 years. She has a Master’s degree in literacy and is also an adjunct professor at Wheeling University in Wheeling, WV. She leads professional development workshops in the areas of reading and writing. In her free time, she explores the great outdoors through biking, hiking, traveling, and gardening. She currently lives in Wheeling, WV with her husband and son.