From Concepts to Kicks: Bringing Art to Life 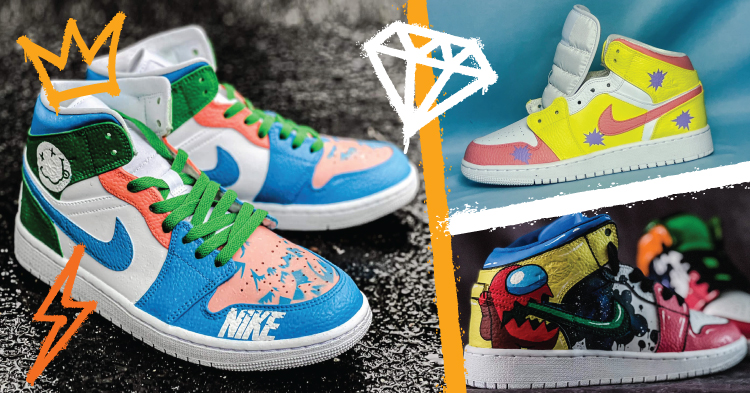 As an elementary school art teacher, it is my job to engage my students and get them thinking critically about what and how they create. I believe that students’ ideas and explorations with art-making are more important than their current technical skills. Because of this, I’ve often felt the art room to be an inappropriate place for competitions, which typically reward kids with artistic backgrounds and discourage others.

However, one of my strongest personal artistic influences is hip hop, which actively embraces competition. It’s arguably the most important contemporary arts movement, and I love the idea and spirit of battling. No violence, no contact, yet it’s personal and confrontational. Competitors become both adversaries and allies as they improve each other through challenges and pressure.

Competition in the Classroom

Jesse White Learning Academy, the school where I work in Hazel Crest, IL, has had plenty of its own challenges this past year. After fluctuating between remote and in-person learning over the first several months, we finally settled into a hybrid approach, with half my students in the classroom and half attending remotely. Somehow I was supposed to teach them as if they were a unified class.

I began with weekly demonstrations for my “roomers”; they made zines, comics, memes, selfies, pixel art, and animations, while my “zoomers” had the opportunity to complete make-up work or have one-on-one meetings with me. But when I had to teach both cohorts at the same time, I felt lost. How could they engage each other or work together on projects when their locations, distractions, and supplies were unequal? Managing things this way could not last long and it kept the class divided.

So I started trying new techniques, eventually coming across the game letsdraw.it to connect the students. Zoomers and roomers could simultaneously play/draw pictures and vote/comment on them as a class. The students had desperately needed those group interactions, but once that need was met I discovered something just as important was lacking: a sense of pressure.

Some students who were diligent with their work often needed the motivation of a deadline to turn things in quickly. Others, I was now learning, revelled in the pressure that came from friendly competitions against their classmates. At a time when students were facing plenty of obstacles and pressures outside of school, my original perception was that they needed less in the classroom. But I was wrong. My students didn’t need less pressure, in fact they were yearning for more, and it was up to me to provide it.

A few weeks later I was showcasing slides of local contemporary artists, like Rahmaan Barnes and Czr Prz. When I presented a few pictures of art by Anthony Amos, his work really caught the students’ attention. Anthony is a sneaker artist who paints custom designs onto shoes. He began making sneaker art as a child when his family couldn’t afford to purchase the latest popular shoes, and has since turned his skills into a career.

Something about the sneakers resonated with my students; they liked the idea of owning shoes that would reflect their personality, of being able to express themselves through unique footwear. Soon everyone was talking excitedly about creating their very own custom pairs. All of that enthusiasm gave me an idea—here was the perfect way to provide students with some healthy competition.

I reached out to Anthony, who I’d actually partnered with in the past while working on a community mural. Together, we came up with the outline for a new project: From Concepts to Kicks. It would be a design contest with students competing for the chance to win sneakers professionally painted by Anthony. Any student, regardless of age or technical skill level, could enter. Four lucky winners would be chosen to receive a pair of Air Jordans customized with their own drawings.

My students are from the South Chicago Metropolitan Area and are often overlooked while dealing with many grown-up struggles. Having spent a few months on active military duty helping to vaccinate the population, Anthony knew better than most what a challenging year it had been. So he wanted to help give the students something to look forward to, a way to end the school year on a high note.

When I approached the school with the proposal, they were very supportive. They added the request that Secretary Jesse White receive his own customized pair too, as the school is his namesake. In our area, Jesse White is an icon.

The school board agreed to cover around half of our budget for the project. We also won a grant from the Awesome Foundation’s Chicago chapter and raised an additional $1,000+ through a Gofundme campaign. We received enough money to create the shoes and even had some left over to provide clay and paint kits for ten runners up.

For the competition, students were given templates, demonstration videos, links to related websites, and other resources. For three weeks we covered important elements of design such as color themes, shapes, juxtaposition, mood, and elements of identity like sports teams, flags, and symbols. I made sure to emphasize that the best ideas, color schemes, and placement of images, along with the most well-communicated motivations for the artwork would be more important than who was the best at drawing.

Students were asked to consider the following elements when coming up with their design:

At the end of the contest, students had submitted over 300 designs. Some of the most common themes included peace, Black Lives Matter, Among Us, and Fortnite, as well as favorite athletes and musicians.

Beyond anything else I did last year, students were constantly asking for updates about the sneaker project. They were thrilled with the results and the notoriety (From Concepts to Kicks was featured on the local news!) Most importantly, the competition not only helped them focus, but also gave students a sense of accomplishment by encouraging them to create something they could actually hold in their hands.


From Concepts to Kicks is a project that, just a year ago, would have felt counterproductive, based on some of my previous views about art contests. Now, we are looking to expand it into a district-wide annual event. In addition to sneakers, students can collaborate with other artists to turn their ideas into all sorts of things, like comics, T-shirts, puppets, etc. Common themes from their designs can even be made into public murals and mosaics. The possibilities are endless.

Too often students are told that the fruits of their labor will come in the form of higher education or a job, but their age and real world problems don’t always permit them to think about the future. This project gave them a chance to earn tangible rewards for their efforts.

Anthony and I both enjoyed having the opportunity to help kids bring their artistic visions to life. Art education happens when we connect community, artists, and classrooms. By making students a part of that experience, with incentives that spark their interest, we can help them realize their fullest potential.

Ben Salus is a teaching artist and author working and living in the south side of the Chicago Metropolitan Area. His work and curricula focus on exploration, meaning-making, and reflective consciousness.

Anthony Amos is an entrepreneur in the arts/personal fashion world, a current active member of the U.S. Military, and a believer in the arts as a means to represent the individual. His company, Sneakerfare Kicks, provides reflections of a person’s heart and personality through customized products.