The Future of STEM: Changing Perceptions 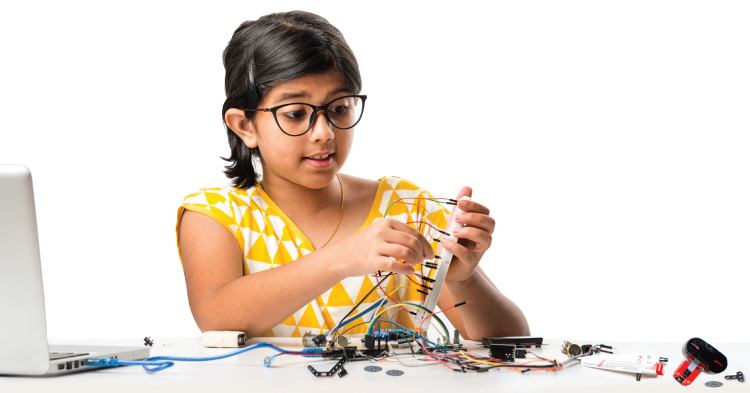 If you ask a kid to draw a scientist, most of them will come up with the same image: an elderly man with wild hair wearing a white lab coat, holding a glass beaker and a microscope. It’s a stereotype we all know well. But there’s never been a better time to challenge that stereotype and show that science is for everyone.

It’s so important to get kids—especially girls and other traditionally under-represented people—interested not only in science, but also in technology, engineering, and math (STEM). Even if you’re not a coding wiz or a microbiology specialist, there are many ways to incorporate different aspects of STEM into the everyday classroom experience.

One of the few positives of the global pandemic is that it demonstrated how valuable the virtual world can be and how important it is in our day-to-day lives. The pandemic highlighted how STEM-based careers, especially those grounded in computer and information technology, will continue to be top jobs for our children in the future.

This is something Kimberly Nava Eggett, Digital Lead Teacher and tech coach at a K-5 public school in western North Carolina, strives to teach her students. Before COVID-19 shut schools down, she hosted a weekly morning coding session for kids from grades 1 to 5. Her goal? “To inspire a new generation of computer scientists, especially girls and students of colour.”

She wants to set students up for success in the early grades, instead of being reactive later on. “This has to be done with intentionality,” Nava Eggett says. “If there’s not an intentionality around who we are targeting, it often ends up being for white boys.”

Women are vastly underrepresented in the STEM fields, making up only 28 percent of the workforce, according to the American Association of University Women (AAUW). The gender gap is especially apparent in the fastest-growing and highest-paid sectors, like computer science and engineering.

This disparity becomes noticeable as early as elementary school. Boys in grade 2 are more likely to say they are strong in math, whereas many girls lose confidence in their math skills by grade 3. By the time these kids reach college, women are significantly outnumbered in STEM majors: the National Science Board reports that females account for only 20 percent of engineering majors and just 18 percent of computer and information science majors.

As a teacher, you can help get kids hooked on coding, robotics, engineering, sciences, and more through exposure and encouragement. Computer technology is, across the board, the most widely applicable form of STEM. Nava Eggett and fellow teacher Rebecca Burry are working on a co-dissertation about how to leverage where students excel and use technology to help them do so.

Burry is a Digital Teaching and Learning coach with 13 Iredell-Statesville schools in North Carolina. She has been teaching for 16 years, half of which she’s spent as a STEM instructor. She is also an adjunct professor with Appalachian State University in their Educational Media Technology department.

“We want to help teachers use an asset-based approach to enhance what kids are good at already,” Nava Eggett says. In 2018, the pair met and realized how passionate they both were about making STEM accessible. “We want to make sure any opportunities [that] we missed when we were younger [are] offered to kids now,” says Burry.

Nava Eggett agrees it’s a learning aspect where she missed out. “Growing up as a girl and a Latina, I didn’t see those things offered to me,” she says. “I wouldn’t have thought I was good at math or coding, but here I am teaching it.”

As a teacher, you may not feel totally ready to jump into Python programming or computer engineering. Erin Petley-Kerr, a grade 4 teacher at Foundations for the Future Charter Academy in Calgary, AB, agrees it can be challenging to get started. “Most hesitancy stems from a lack of confidence,” she says.

Burry recommends starting small and working your way toward more complex aspects. “It’s OK to take baby steps. This makes sure you’re always moving forward. You may be moving at a different rate than others, but at least you’re moving.”

Petley-Kerr suggests beginning with introductory digital citizenship and safety lessons for younger students—like those offered by Common Sense Media—to give kids the opportunity to at least get out the devices and learn the basics. To go beyond safety, Burry points to the SAMR model of tech integration: substitution, augmentation, modification, and redefinition.

On one end of the spectrum, you could read a book on a tablet. The tech becomes a simple substitute. “You’re dipping your toe in,” Burry encourages. At the other end of the spectrum is creating and collaborating with technology so that it becomes the tool. The point is to root all sorts of lessons—STEM and otherwise—in technology.

Kids are digital natives and will likely figure it out before you do. “There’s an intergenerational difference. They’re not afraid to try things or click around,” says Nava Eggett. Burry describes herself as part of the “push-button generation,” but children today are more exploratory, so a key part of getting started with tech in the classroom is trusting the kids and being vulnerable.

“You have to be open to learning with the students, creating a learning partnership. You can showcase and model that continuous learning happens even with adults,” Burry explains. Use the introduction of STEM-based lessons as an opportunity to learn alongside your students. “Part of this whole process is trusting the kids.”

Petley-Kerr knows this can be challenging in itself: “The hardest thing for teachers is to let go—allow the students to figure it out. But try not to be scared to do that,” she advises.

Once you’re ready to learn alongside your students, dive into online resources. “There are lots of resources that are free that you don’t have to be a computer programmer to understand,” Nava Eggett says. Code.org is an accessible site for everyone. They have great activities to hook students on the basis of computer programming (like Minecraft, “Every kid loves Minecraft,” laughs Nava Eggett). Hour of Code is also a fantastic resource, featuring hundreds of hour-long coding lessons for students of all ages, grades, and abilities. “The teachers don’t have to do anything except get them on the website,” says Petley-Kerr.

For younger grades, picture books are a great go-to. The Zoey and Sassafras series written by Asia Citro and illustrated by Marion Lindsay; or Iggy Peck, Architect and Rosie Revere, Engineer written by Andrea Beaty and illustrated by David Roberts all feature kids exploring the world through science. Even TV shows like The Magic School Bus, Bill Nye the Science Guy, and SciGirls are great STEM hooks for kids.

As a teacher, surround yourself with different networking groups on social media to gain insight and inspiration. Podcasts are also a great way to see what’s going on in the world of STEM. (Nava Eggett and Burry even host their own podcast, Through Our Lens.)

Petley-Kerr recommends involving your community: bring in volunteer speakers or invite them to do a video conference. She invited a woman in the STEM sector talk to her students about her job and how she got into it. “The girls in my class were really interested,” says Petley-Kerr. “Open it up to parents, aunts, uncles, and leave lots of time for kids to ask questions.”

Don’t forget that not all of STEM has to be tech focused. Even just using different blocks or craft material to build towers, bridges, or lever and pulley systems is a great way to integrate engineering and math without requiring any tech know-how.

If you’re feeling like you can take a bigger step, follow in Nava Eggett’s footsteps and start a coding club. Or follow Petley-Kerr’s lead: she hosts a “techspert” club, where she helps older students learn skills that they can then teach to younger grades in a one-on-one peer support format.

By encouraging all our students, especially girls, to get involved, we can slowly start to change the future of STEM. “We want to change the perceptions of all kids to see scientists as anyone,” says Burry. This is especially important because, as Petley-Kerr puts it, “this is the world we’re living in and this is where we’re going.”

Burry and Nava Eggett hope that their research helps take out gender and ethnicity. “It’s not just about girls, it’s about making sure everyone has the opportunity,” Burry says.

The future is bright, as long as we are setting kids up to go after whatever they’re passionate about, and teaching them how to use tech, science, engineering, and math as tools to make that happen.