The Quest to Give Voting Rights to Permanent Residents 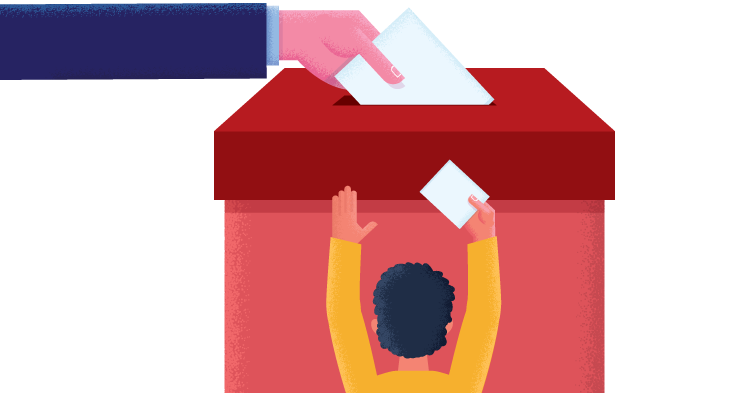 Asif Hasan and his wife can foster children in Fredericton, NB, the city he has called home for nine years. But he can’t help decide who will form the municipal government.

Hasan came to Canada from Bangladesh as an international student at the University of New Brunswick and acquired permanent resident status after he finished school. Living in Canada has been a dream for him, he shares.

“I always admired that this is a land for liberty, to practice freedom,” Hasan says. So when he found out he couldn’t vote in municipal elections he was shocked. “It just didn’t make sense to me that my voice is muted,” he remembers.

As a small business owner and entrepreneur, Hasan has helped several people find work in the community. Not only does he pay taxes, but he’s actively helping the city’s economy grow. He decided to begin a local campaign to give permanent residents in Fredericton the chance to vote. It grew into a provincial initiative, the Lost Votes Campaign New Brunswick. The group estimates that there are 29,500 permanent residents in the province who are unable to vote because they’re not citizens.

The campaign is getting noticed. In December 2020, a bill was introduced in New Brunswick’s legislature to change the province’s municipal voting law to give permanent residents the right to vote in municipal elections. “We have a political will,” Hasan says.

That is rare. The discussion about making permanent residents eligible to vote in local elections has happened in a number of municipalities across the country. While many city councils have approved motions supporting the change, those actions aren’t enough to expand the number of eligible voters. In Canada, provincial and territorial governments determine who can vote in municipal elections, and they all currently have laws restricting that right to Canadian citizens. So far, no provincial or territorial government has agreed to allow non-citizen residents to cast ballots for their municipal representatives.

“All the best issues require a few kicks at the can to get through a provincial government,” says Joe Mihevc, a former Toronto city councillor who brought forward a motion in 2013 about giving permanent residents the right to vote in municipal elections. While it passed, the Ontario government rejected the idea a few years later when considering changes to the province’s Municipal Elections Act. “Sooner or later, one of [these motions] will break across Canada,” Mihevc affirms.

Several countries around the world allow permanent residents to vote in local elections, although some require these individuals to have lived in the country for a specific amount of time. Citizens of European Union countries can also vote in municipal elections of other European Union nations.

“Canada is quite unique in how intensely provinces regulate the municipalities,” says Chris Erl, a doctoral student in the department of geography at McGill University in Montreal, a city that in 2021, discussed allowing permanent residents to vote in municipal elections. “The city is the creature of the province.”

However, there are specific features of municipal government that make it the obvious place for a discussion about expanding voter rights to non-citizens, explains Erl.

“It’s the level of government that most people will interact with on a day-to-day basis whether or not they know they’re interacting with it,” he says, noting that decisions about emergency services, policy, transit, and waste collection are all made at the municipal level. Permanent residents help fund these services through their property taxes, just like citizens do, but they can’t vote to elect the people who will manage those services. “It’s one [level of government] that non-citizens will be actively paying into but have absolutely no say in what happens.”

While municipal politics are concerned with very specific geographic areas, voters often can live elsewhere. In some jurisdictions, local voting is open to citizens who own property in the municipality—even if the owners live somewhere else.

“You can live outside of Canada and retain your Canadian citizenship,” says Alejandra Bravo, director of leadership and training at the Broadbent Institute in Toronto. Years ago, Bravo worked on a campaign to study the prospect of permanent residents voting in Toronto. She also ran in two municipal elections.

On the contrary, she adds, “the evolution of the municipal franchise has always been around recognizing the relationship of a person to a piece of land.”

“Because it’s already tied to residency and not citizenship, it seems like one of the places where you can make that shift,” says Keith Cherry, a post-doctoral researcher at the University of Alberta’s faculty of law. Cherry supports non-citizens gaining the ability to vote in municipal elections. In his view, everyone who is affected by a political decision should have some input into the decisions that are made.

“It’s hard for me to see a danger in allowing more people to vote,” he says. “I tend to think everybody should be able to vote on any decision that affects them. The only legitimate reason someone should not be allowed to vote is to say, ‘You are not affected by this decision.’”

At the National Level

But even countries that allow permanent residents to vote in local elections typically don’t allow them to vote in regional elections for provincial or state governments, or for national elections. (Chile, Ecuador, and Uruguay do, but only if potential electors meet an additional set of criteria.)

“The idea that to vote you should be a citizen is deeply engrained, even in countries where the right to vote has been extended at the local level,” says Willem Maas, a professor of political science at York University in Toronto. “That’s why it hasn’t been extended at the national level. In order to vote for your city council, it’s fine if you’re a permanent resident. But for our national polity we really want you to prove that you’re a member of this polity by acquiring citizenship and acquiring Canadian citizenship.”

Canada’s voting policy can’t be determined by what other nations do, explains Andrew Griffith, who has written several books about citizenship and multiculturalism and is a former government employee.

“I think it’s a false comparison,” Griffith says of arguments that Canada should expand voting rights for local elections because other nations have done so. “We obviously should look at what other jurisdictions and other countries do—it’s perfectly valid to ask these questions. [But] we shouldn’t do it just because the others do it. We have to look at what makes sense in our particular context.”

When compared to other countries, Canada has a very high rate of immigrants who become citizens. In 2016, the last year for which census data is available, 86.2% of immigrants to Canada had become Canadian citizens. “It probably makes more sense to focus on getting citizenship so they have full voting rights,” says Griffith.

What this percentage fails to take into account, however, is how long ago those citizens immigrated to Canada. Data indicates that the citizenship rate is actually declining among recent immigrants. A November 2019 report from Statistics Canada says that in 2016, only 43% of immigrants who had been in Canada for five years were citizens, compared to 68.1% in 1996.

Decreases are also noticeable among immigrants with lower incomes. In 1996, 65.8% of immigrants whose annual household income was $10,000 or less had become Canadian citizens. This was almost equal to the 66.2% of immigrants in the highest bracket with yearly incomes of over $100,000 who had naturalized. By 2016, the gap was considerable. Of those immigrants in that same lowest income bracket, only 51.5% had become citizens while 66.7% of those in the highest bracket had.

Individuals who work with immigrants say these disparities are reasons to ensure permanent residents can vote at local elections as soon as possible. New immigrants, especially those with lower incomes, often use a lot of municipal services, and local politicians need to know how they can better serve them.

“The sooner that newcomers become engaged in the voting process, then the more likely they are to keep voting,” says Jennifer Watts, a former city councillor in Halifax Regional Municipality and the chief executive officer of the Immigrant Services Association of Nova Scotia.

“It’s a wonderful way to say to newcomers who just arrived in our province: ‘We want you to stay here. We know that you pay taxes, you volunteer, you create jobs, you work in your communities—you’re good neighbours. We think that all of those things are really beneficial for you being able to make decisions around municipal issues,’” says Watts.

This is particularly important in the Atlantic provinces where immigrants often leave the area for more populated regions of Canada. Sebastian Salazar-Chavez, community and social planner for the city of Fredericton, explains that there is no guarantee that allowing permanent residents to vote in municipal elections will be enough on its own to reverse the trend of people leaving the area.

“It would be a small thing,” says Salazar-Chavez, who moved to Canada from Peru more than a decade ago and became a Canadian citizen in 2013 after working for years as a city planner for Fredericton. “But having anything else that would help retain people is always a good thing. You want as many reasons for people to stay.”

Community engagement is very important to new immigrants, shares Tara Bedard, executive director of the Waterloo Region Immigration Partnership, an organization that works with immigrants in Ontario’s Waterloo Region. In June 2021, Waterloo City Council passed a motion asking the Ontario government to allow permanent residents to vote in local elections. Bedard has often heard new citizens talk about how excited they are to vote.

In Fredericton, Asif Hasan “absolutely” plans on becoming a Canadian citizen. “I’m definitely blessed to be in Canada,” he says. “I know that Canada truly wants to make everybody feel that they belong here, but we [still] have a lot to figure out.”