Saving the Future: Climate Action and the Rights of Nature 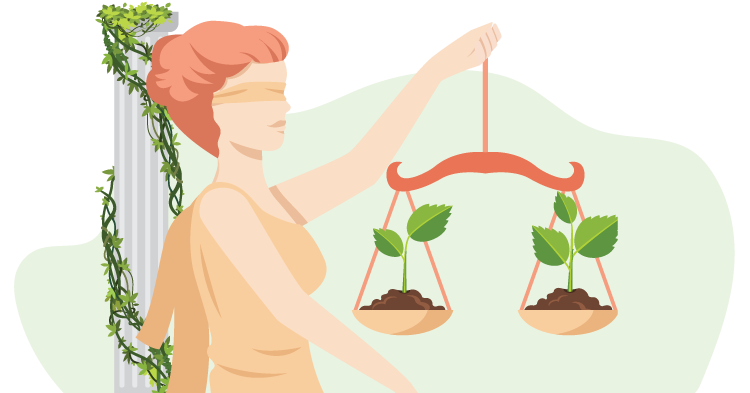 Originally published in TEACH Magazine, 40 Years of the Canadian Charter of Rights and Freedoms Special Issue, 2022

This year marks the 40th anniversary of the Canadian Charter of Rights and Freedoms. The Charter guarantees Canadians the basic rights to democratic and free life, but what about the right to nature? Some environmentalists argue that access to a safe and unpolluted environment should be a protected human right as well.

A landmark case is currently making its way through the legal system in Canada, the very first of its kind. Seven young climate activists are taking the Ontario government to task for failing to live up to several climate change targets. But it’s the argument these young mavericks are using that’s truly revolutionary: for the first time in Canadian history, climate change has been cited as a violation of a Canadian citizen’s Charter rights.

And what of natural resources that are taking the brunt of climate change? Should they be entitled to their own rights? An emerging concept in environmental law is the “rights of nature,” which recognizes that natural ecosystems have rights the same way humans do. These rights can be enforced through statutes, treaty agreements, or even added to a country’s constitution.

Queen Elizabeth II signed the Constitution Act on April 17, 1982, which was the last time Canada had to seek approval from Britain over its own governance before becoming a fully sovereign state. The Charter forms the first part of the Act, and guarantees seven distinct categories of rights and freedoms for every Canadian.

There is no explicit mention of nature or the environment in the Charter and there are currently no blanket provisions in Canadian law to enshrine natural features like lakes, mountains, or forests with rights of their own.

In contrast, other countries have given such rights to environmentally or culturally significant natural features. For example, the Ganga and Yamuna rivers that run through India were declared living entities with the same legal status as a person in 2017. The Constitution of India also includes a call to citizens to “protect and improve the natural environment including forests, lakes, rivers, and wildlife, and to have compassion for living creatures.”

In many legal systems, nature is often treated as nothing more than property, but New Zealand is leading the way in acknowledging that nature cannot be owned, and that people are not separate from or dominant over it. In 2014, Te Urewera National Park was the first natural resource in the world to be granted the same legal status as a person. It then was decommissioned as a natural park and renamed Te Urewera. Three years later, the Whanganui River was also granted legal personhood, in the same month as the Ganga and Yamuna rivers in India.

New Zealand laws emphasize that humans are expected to protect the rights of nature. Specifically, the country’s laws have incorporated philosophies of the Māori—the Indigenous Polynesian people of New Zealand—which include an expectation and responsibility to maintain the land and its resources for future generations, along with concepts of kinship and stewardship that are also central to Indigenous law in Canada. The Māori fought for over a century to obtain legal protection for ancestral lands and natural resources that they have deep connections to, and Indigenous peoples in Canada are doing the same.

Groups of people motivated to fight for an environmental cause can achieve great things, as Theresa McClenaghan, the Executive Director of the Canadian Environmental Law Association (CELA), explains: “People can fight to protect a natural feature and then use the tool of the law to argue for rights protection.”

Such as in the case of the Magpie River in Quebec. Although it took a decade-long fight, this beautiful river is now the first natural feature in Canada to officially attain legal personhood status. The Innu of Ekuanitshit, along with local environmental groups, worked tirelessly to protect the waterway, which has deep cultural significance to the Ekuanitshit community. Under Innu Indigenous law, the river was granted nine legal rights:

Unfortunately, McClenaghan says that economic interests often trump other rights in matters of environmental law, an argument termed “justified infringement.” The same argument is also used in Canadian Aboriginal Law against First Nations and Indigenous communities when for-profit companies have an interest in their land or natural resources.

“This decision was ground-breaking in Canada but it’s also untested. If Hydro Quebec comes along next year and wants to dam the river for hydropower, are [the Innu] going to be able to resist that?” McClenaghan asks.

Nature rights aren’t the only rights-based initiative for addressing the climate crisis; climate and environmental activists have also been working hard on a different approach. The David Suzuki Foundation launched the Blue Dot Movement in 2014, which aimed to incorporate the right to a healthy environment into Canadian law by amending Section 7 of the Charter.

Ultimately, the movement has not achieved its initial goals, but it has made significant contributions to environmental protection in Canada. Some of its successes include encouraging over 30 percent of MPs to sign a public pledge in support of environmental rights, as well as helping to bring Bill C-28—an Act to amend the Canadian Environmental Protection Act—to parliament. Bill C-28 recognizes that everyone in Canada has the right to live in a healthy environment.

Fraser Thomson is a lawyer at Ecojustice, Canada’s largest environmental law charity, and represents those seven Ontario youth who are taking the government to court. Armed with testimonies from 17 different experts, and bolstered by thousands of pages of scientific evidence, the Mathur et. al. lawsuit will argue that Ontario’s weakening of climate targets constitutes an infringement of the applicants’ Charter-protected legal rights to life, liberty, and security of the person.

The Mathur case, also known as #GenClimateAction, has been brought by a group of inspirational youth who range in age from just 12 to 23 years. Thomson explains the motivation that led them to this point: “Young people will bear the costs of this climate emergency even though they have done the least to contribute to it. They have so much at stake and the government has shown repeatedly that it’s not willing to do what’s necessary.”

Despite government attempts to thwart it, the group has won the right to have their case heard. “It’s a historic victory because it’s the first time any Canadian court has said that the harms caused by climate change could trigger our Charter rights, our most fundamental rights under our constitution,” says Thomson.

“Governments across not only Canada but around the world can expect lawsuits of this type, because climate change is an existential threat,” he adds. “It makes sense that citizens empowered to use human rights instruments will be doing exactly that to try and protect themselves and save the future.”

Thomson became interested in climate action as a young person himself but says that the threat always felt like a future problem. “Youth today are seeing the impacts of climate change, but they also know that the window to fix this is getting narrower and narrower,” he says. “They are very science literate. They know that the Intergovernmental Panel on Climate Change has said that we need to make severe reductions in our greenhouse gas emissions by 2030, and they are rightfully distressed.”

How Educators Can Help Young Conservationists

McClenaghan says that educators can inspire young people to get involved in climate action and environmental protection by checking their local environmental registry.

“People are entitled to know when a proposal is made for a new pollution permit in their neighbourhood, and to comment on it if the decision is unreasonable. It’s a great exercise to make these issues extremely germane and relevant to students; they can look up their neighbourhoods and see if something has been posted that’s affecting them,” she explains.

Tovah Barocas is the president of Earth Rangers, a charity that helps kids undertake environmental missions through an app. The organization also visits schools to deliver assemblies about conservation education.

Barocas says that it’s important to get kids involved as early as possible. “It’s the habits that we learn as children that we take with us for the rest of our lives,” she notes. “We’ve seen from previous generations that we spend a lot of time trying to break bad habits and relearn things in order to reduce our impact on the environment, and so it’s really critical to get kids to have those good habits right from the beginning so that they grow up to be responsible citizens.”

The Earth Rangers app, which is designed for children aged 6 to 11 years old, features an avatar and a selection of missions where kids can earn points by making sustainable choices like reducing single-use plastics or addressing food waste in their homes.

Barocas says that severe environmental impacts on many communities, like floods and forest fires, have led to fears and anxieties in a lot of children and teens. “Giving kids an outlet to make a difference and to see the impact of their actions is one of the main ways to combat eco-anxiety by transforming it into eco-action,” she adds.

Teachers can request a free in-school show or a virtual presentation by visiting the Earth Rangers website. Recently, the organization has also launched an educator’s homeroom, with resources and lesson ideas, plus a professional development micro-credential on how to address eco-anxiety in students.

Fraser Thomson, who has seen first-hand the difference engaged young people can make, has the following advice for kids and teens who are concerned about their environment: “Often there’s a paralysis of not knowing where to start, but if you read the histories of our youth in [the Mathur] case, it started very small, and now they’re tackling some of the biggest issues on the planet. Once you get moving, the momentum is easy to gain and every small action matters.”

Natural features in our country may not have specific rights under Canadian law, but our Charter rights can form the basis for activism to hold our leaders to their promises and help halt climate change. This is just another reason why we should all be celebrating this 40th anniversary of our most fundamental national rights.

Fiona Tapp is a former teacher and school administrator of 13 years. She writes about education, parenting, and travel for a variety of publications including National Geographic, the Globe and Mail, the Toronto Star, the Sunday Times, and many more.