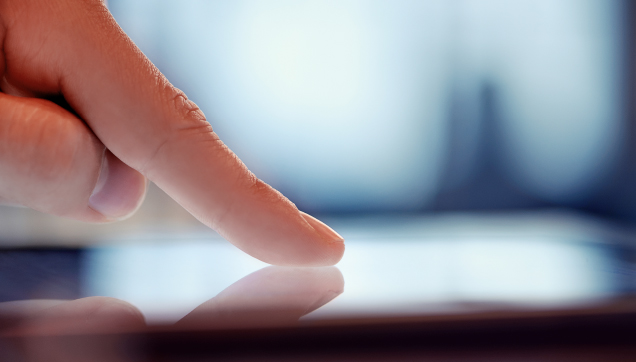 By Tim Wesson and Muna Kadri

As the assistant head of special education at Vaughan Secondary School in the Toronto area, Tim Wesson describes his professional learning journey as one driven by the desire to improve the standard of living for autistic students and to seek ways to build partnerships in the school community. For years, Tim has been teaching autistic students and facing a recurring struggle to assist them in developing their communication skills. The ability to interact effectively is perhaps the largest barrier to inclusion and independence that students on the spectrum encounter. One night, while watching 60 Minutes, Tim saw a segment on an iPad application called Proloquo2go that assists nonverbal autistic students with verbalizing their thoughts. Proloquo2Go turns an iPad, iPhone or iPod into an augmentative conversation device. The app provides an individual with a voice by using text to speech-based symbols or words selected or typed by the user, with word prediction capabilities. In its basic view, the app is setup like a communication board. Users tap a word, phrase, or picture and the program speaks it. A spark was lit. Tim wanted to know if this application could help his students but the high cost of both the device and application would be a challenge.

Wayne Gretzky was right, you miss 100% of the shots you don’t take, so seize every opportunity presented to you.

Back at school, Tim shared the 60 Minutes clip with his staff and administration colleagues to garner interest in working with this technology. Muna Kadri, the school’s literacy teacher responded with, “I think I may have a way for us to make this happen.” Tim and Muna then turned to the Ontario Ministry of Education’s Teacher Learning and Leadership Program that provides funding for “experienced teachers to enhance their professionalism and skills, extend their learning and share their expertise with others for the broader benefit of Ontario’s students.” Once Tim, Muna, and the Vaughan Secondary team secured funding for the project, a three-day conference was held to prepare teachers for the endeavour. They dove right in. Muna managed the purchase, setup, and management of the equipment while Tim integrated the technology into his classroom.

Although Tim had received the iPads and installed the app, he still needed to learn how to use Proloquo2Go. This, maintains Tim, is an example of the importance of building a learning network. Their network consisted of a speech and language pathologist, occupational therapist, as well as a communicative disorders assistant from Children’s Treatment Network (CTN) who guided the teachers’ professional development. The experts provided profiles that were customized to each student’s needs along with a huge library of online learning tools from Proloquo2Go. The CTN team coached teachers so that they could learn as much as possible about the app. During the learning process, Tim and Muna learned first hand that that you don’t have to be an expert to try something new in the classroom.

Start with a clear goal

Before starting the project, baseline data of students’ communication skills were taken. Using partners from the wider school community, the data showed that the students were misunderstood in an overwhelming majority of trials. Each student already had an Individual Education Plan so the learning objectives were built on established goals. “By starting with a goal that would engage our students, we hoped that any success would motivate them to persevere,” says Tim. “Our most common goal was to ‘independently initiate a request [from students] three times daily using Proloquo2go.’ ”Tim was working closely with a group of high school kids who are highly motivated by lunch so using prompts, students were encouraged to tap the ‘I want’ button followed by a selected a food item. Staff would then hand students what they requested.

There are no mistakes, simply opportunities to learn from experience

Quickly, it became apparent that organization and layout of the buttons in the app needed to be specific to each student. Muna describes the process: “We started off by borrowing a template that was used by another student in our school board and modified it to suit our class. Over the course of the first few months, we made near daily revisions to better suit the needs of each student.” For instance, Tim explains that reading comprehension was a strength for one student and as result he removed pictures that distracted the student. For another student, all of the choices on a particular screen were overwhelming so the buttons were colour coded and organized into rows by subject to accommodate his learning style. Throughout all the revisions and modifications, the teachers were able to become more familiar with the program and its many features.

There are no setbacks, just new opportunities to learn

Often, Tim and Muna found their students still required verbal prompts to make requests. Since P2G is a communication tool, it seemed natural that students would rely on their teachers to start the conversation. “While we certainly hoped for some spontaneous use of P2G, we did need to use verbal prompts to get students to use the app,” says Tim. He and Muna opted to use prompts that are naturally part of language and conversation whenever possible. For example, one student would sit quietly at the lunch table until asked, “what would you like to eat today?” He made his request or teachers were encouraged to say, “Pardon me? I don’t understand,” and the student would tap the appropriate button to express himself. The team also asked the entire school staff to initiate the students to communicate in the same way. This approach led students away from relying on their support staff to prompt them to use their devices and seamlessly integrate the P2G into conversation.

Another powerful teaching tool the P2G team employed was modelling. To convince students that P2G was an effective conversational tool, the educators had to prove it by using it themselves. When introducing students to a new classroom goal, Tim and Muna did so using P2G. It helped the students see the placement of the buttons in the app. “Modelling also gave us a greater appreciation for how difficult it is for our students to adopt a new communication method, it truly felt like we were all learning a new language,” shares Muna.

The larger your support network, the greater chance your students will succeed

After integrating the P2G into the classroom environment, the opportunity to continue using the iPad at home was offered to parents. Here, CTN’s support was particularly valuable in that they were able to provide direct support to parents as their mandate allows them to go directly into the home to work with the family. They were able to teach the families how to use the app and made changes to the app based on the student’s life at home. Tim discovered that “We found that having the app used at home increased the student’s success. It becomes a much more powerful tool when it is always available to the student.”

As a new school year begins. Tim and Muna reflect back on the successes of the previous term with P2G and hope to carry them forward. They were able to meet many learning goals while others needed to be adjusted so that they became more attainable, but that is just good special education practice. Some students were able to learn to use their iPad without teacher prompts during some activities. As a school community, they were very encouraged by the student progress in only a year, which keeps them optimistic for the future. Muna shares some insight she received during the pilot project, “An autistic student’s learning progression is not like a mountain, always increasing. Rather it is like stairs. There is success, but then it plateaus while we work to maintain it before the next success.” With that in mind, Tim and Muna stress, that, for their students, it is very important to use the app as much as possible. They both agree that “When our students used Proloquo2Go to communicate everyday, they became the most successful.”

Tim Wesson is the assistant head of special education at Vaughan Secondary School in the York Region District School Board. He is keenly interested in creating classroom environments that focus on developing skills that will enhance quality of life.

Muna Kadri is the head of alternative education and lead literacy teacher at Vaughan Secondary School in the York Region District School Board. She is passionate about investigating ways technology can be used to promote student success and drive teacher learning.