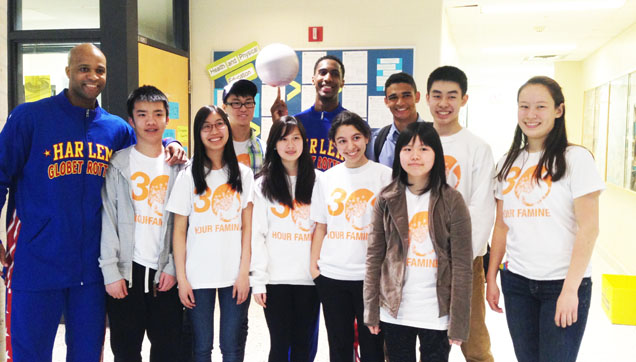 Later this month, nearly 200 high school students at Earl Haig Secondary School in Toronto will also be attending class while hungry when they participate in World Vision’s 30 Hour Famine on April 25 and 26. Students will go without food for 30 hours to help raise money for World Vision’s food security programs. The international relief organization is dedicated to working with children, families and communities to overcome poverty and injustice in nearly 100 countries. The 30 Hour Famine began in 1971 in Calgary. More than 55,000 students participated last year.

This year, the participating students at Earl Haig will be spending the night at the school. The goal is to raise $10,000, said Cameron So, the president of Earl Haig’s World Vision club. The Grade 12 student has been president of the club since he was in Grade 9. The club holds monthly fundraisers for World Vision and, as a group, sponsors a child. Last year’s famine event brought in more than $6,000. Because he’s graduating soon, he wanted to “aim high,” So said, explaining the reason for this year’s monetary goal. As of this week, the group had raised a little more than $3,150, according to the official 30 Hour Famine website.

And the students’ efforts were given a boost this year when two members of the Harlem Globetrotters, a partner of World Vision, made a rare stop at the high school on April 7. Herbert “Flight Time” Lang and William “Bull” Bullard travel around the world with the rest of the Globetrotters promoting positive community involvement to young people, as well as showing off their impressive basketball skills. Lang and Bullard spoke to the Earl Haig students about engaging in community initiatives, as well as motivated them for the upcoming famine. 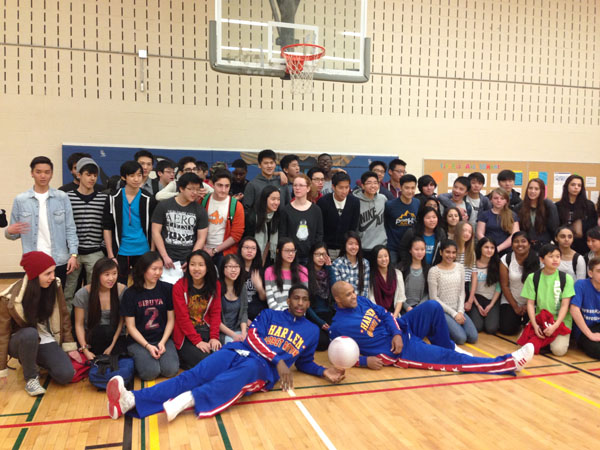 The message didn’t fall on deaf ears. Many students at Earl Haig are already preparing to continue their humanitarian efforts. So plans to still be involved with the 30 Hour Famine after he graduates, he said. And some of this year’s famine organizers were last year’s participants.

Kimia Javadifar attended last year’s event, and enjoyed it so much the Grade 11 student is helping co-ordinate this year’s activities. The experience showed her how much she takes for granted—hot food, water, she said.

Javadifar now tries to limit her electricity use and water consumption. For her, this means giving up more than food during the famine. “The moment I got to eat [after the famine last year], I went right into it,” she said. “But some people [go without food for] more than 30 hours.”

The Globetrotters’ appearance gave So and the rest of the group a chance to get the message out and remind students that poverty continues even after their 30 hours of hunger ends, So said.