How Virtual Worlds Can Transform Learning 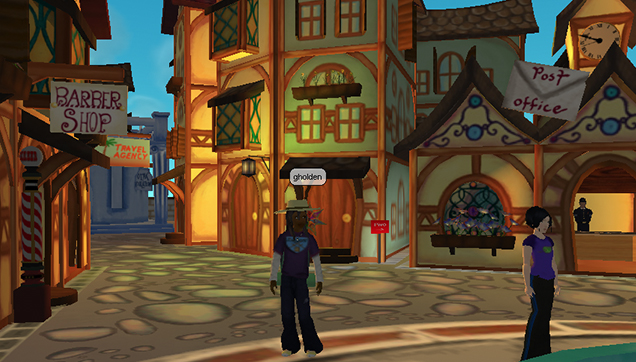 So what are Interactive Virtual Learning Environments, and how do they foster transformational learning? This brief video serves as an introduction: http://bit.ly/1oHvWr6.

My journey in this field began in Vancouver 30 years ago, as an aid with Trainable Mentally Handicapped students. Designated as ‘uneducable,’ these students were relegated to gaining work experience. Noticing they easily recounted movie plots and the artists and lyrics of Top 40 songs, it occurred to me that the real handicap might be a teaching methodology that was incompatible with their learning styles. With a number of donated Apple GS computers and the help of a friendly programmer, some basic reading games were created. The students crowded around the computers to ‘play’ these games during their breaks. After 12 weeks the majority of the students read primary books fluently. I was promptly given a leave of absence to enroll at Simon Fraser University to become a teacher.

After graduating from Simon Fraser’s Professional Development Program, I built upon the insights that my former ‘uneducable’ students had taught me. My new grade 7 and 8 students fervently embraced ‘The Kindergarten Principle’ (keeping it fun). Classroom discipline and academic achievements were non-issues, as students embraced the opportunities they had to repeat activities and learn from their mistakes. Despite a dearth of worthwhile educational games, programs such as Logic eXtension Resources motivated students to learn the facts, and commercial simulation software such as Caesar III, assisted them with developing critical thinking skills. No one was late to class and parents had to call me to tell sick students to stay home.

Then, seven years ago, school downsizing provided me with the opportunity to transfer to a new school and teach Distance Learning. I had high hopes of learning more about exploiting students’ access to the Internet through home computers. While this school was likely one of the most progressive in British Columbia, I found myself mailing boxes of textbooks and media disks to my students. While considerable portions of the curriculum were being digitized, this didn’t change the fact that the learning was passive and didn’t facilitate the immediacy of feedback or learning by mistakes. Worst of all, I missed the classroom’s magic and the opportunities it provided for relationship and community. I found the lack of these attributes to be devastating when it came to the learning process. After a year, I went to the principal to share my resolve to find a way to address these issues and received her blessing to do so.

Restoring both the immediacy of feedback and learning through failure was, well, child’s play. I introduced some simulation games I’d used previously, as well as Thinking Worlds. In Thinking Worlds, students could enter a wide range of 3D virtual environments that contained a contextual match for the content being learned. Students were introduced to curriculum content through their interactions with various objects. I raised the ‘pass’ grade level to 90% and seldom got less that 95%. Parents began to notice that their child’s increased engagement in learning was being accompanied by a similar rise in their grades across the curriculum, and in their confidence as learners. Even so, the critical thinking required by ‘the game’ didn’t always take the content to higher levels of critical thinking. The ‘presence’ of a mentor relationship and/or learning community was still notably lacking. Elluminate, now known as Blackboard, was being used to provide a presence for instructional purposes and/or to ‘touch base’ with students, but it wasn’t a true virtual classroom. So I searched for months for virtual environments that were rich in 3D graphics, but suited to education like those my students were already familiar with such as, World of Warcraft, Halo, and dozens of other platforms. Dozens of candidates were screened before discovering the ‘Holy Grail’ of Virtual Learning Environments—Quest Atlantis. The program was created by Dr. Sasha Barab of the Learning Sciences Department in the Faculty of Education at Indiana University for classroom use. It remains the only virtual learning environment I’ve found that is educationally sound, works across platforms, is safe, appropriate, and of course—free. Here’s a brief video explaining Quest Atlantis: http://safeshare.tv/w/kamNGlyIxj. The curriculum is quest-based, ensconced in a brilliant backstory that brings students and teachers into a vibrant interactive learning community that’s not only international in scope, but demands that students access authentic feedback from local experts. The hundreds of available quests carefully build students’ academic skills, step-by-step, to help them develop personal solutions to challenging puzzles. The solutions possess intentionality (significance for the students); authenticity (the problems are both real and exist in contextually correct environments); and consequentiality (students get to experience the impact of their decisions).

My pilot program for Quest Atlantis was wildly successful and a new era of using 21st century technology for 21st century students began at our school. A student spokesperson had this to say: http://safeshare.tv/w/qYXnWBeAzB. Convinced of the efficacy of the program, I flew to Indiana University to take the course I needed to become a trainer. Here’s some feedback from one of many classroom teachers I subsequently trained: http://safeshare.tv/w/ilKKPlSHLi.

An unexpected outcome of using Quest Atlantis was that the students engaged daily in carefully crafted lessons, evolving into co-educators, partnering up with me to enrich their learning experience. Having given them a blank virtual environment (in an Active Worlds universe for example, another virtual learning environment program), my grade 7 students engaged in project-based learning and rebuilt Mesopotamia, Egypt, Greece, and Rome, and embedded the educational content they were learning within these ancient builds. They rebuilt our brick and mortar school as a 3D school, complete with fully functional classrooms and multimedia centres where they could collaborate with me and their peers all from home. They also learned independently how to write simple coding in order to animate and enrich features in their virtual environment. The students produced such a high standard of work that we kept their creations for the next year’s students to utilize.

My grade 6 students learned about the challenges of wildlife management and the food web by becoming wolves in Yellowstone National Park (http://safeshare.tv/w/UyMYZlbYzv). When I teased them at the conclusion of the unit that they were to bid the transplanted Canadian wolves goodbye, they confessed that they would be continuing on, using satellite technology to monitor the status of these wolves. Wolves they’d come to know by name. I was not surprised by their initiative, realizing by now that the genius of a student appears when they’re engaged in things that matter to them.

Fast-forward to 2012 and the impact of virtual learning environments I witnessed in my career was not lost upon the visionary leadership of Heritage Christian Online School, my new school. The Superintendent, Greg Bitgood, had anticipated this kind of experiential learning and the Principal, Janet Rainbow hired me to grow an Immersive Technology (IMT) program at the school. Here’s a summary of what happened in that first year: http://safeshare.tv/w/EMOzmykYft. Since this time, the IMT program now has online teachers trained to work with grade 5-7 students, completing the Prescribed Learning Outcomes for Language Arts, Science, Socials, and Career and Health. The Prescribed Learning Outcomes for Art 8 and Art 10 are met through classes where students meet together in 3D virtual environments to learn how to create and build in virtual worlds. We’re enriching the Language Arts and Math curriculum with other 3D virtual platforms and now have entire campuses where hundreds of students can meet on both one-on-one basis with their teachers or in classes or large assemblies. To serve both Canadian and international schools, we’re also beginning to build another parallel universe to the one we’ve already created in Quest Atlantis for students in grades 8-10.

With new teachers trained to meet the growing number of students registering in our IMT program, I’m now free to work full-time on developing additional virtual learning environments and training teachers both inside and out of our school. Over the next few months we’ll be continuing to support a Distance Learning school serving Francophone learners in Alberta, and begin training another that services First Nations communities. We’ll also begin implementing planned collaborations with Ambrose University to assist with setting up a 3D virtual college and assisting them with the Professional Development they provide for a progressive school district in Alberta. What about you? Is it possible that your teaching practice and 21st century students could benefit from the use of a truly 21st century approach to learning? If so, contact me at gholden@onlineschool.ca.