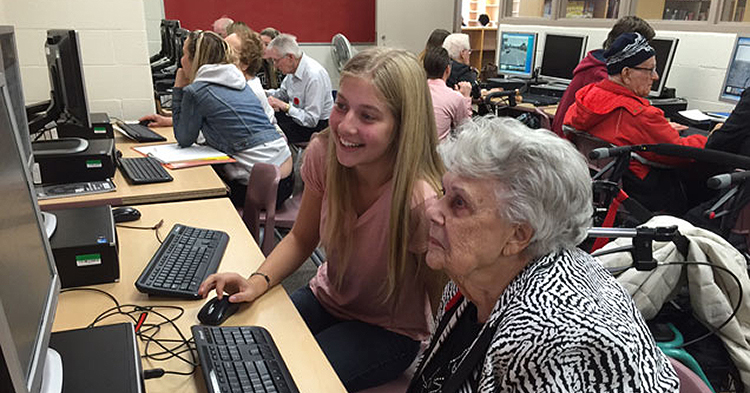 From the way Donna places her hands, it’s obvious that she once knew her way around a typewriter. Today, Donna is typing on a keyboard and learning how to send an email to her granddaughter for the first time.

Donna is a resident at Cedarvale Lodge in Keswick, ON, one of Sienna Senior Living’s retirement residences and care communities. She is also a member of the Cyber-Seniors program in partnership with Keswick High School and the York District School Board’s Leadership Program.

The Leadership Program is a Ministry of Education-approved volunteer initiative for students in Grades 10 and 11. The goal is to teach students a variety of leadership styles, such as authoritative, participatory, or delegation. Students must afterward apply those skills to support their younger peers in Grades 9 and 10 with classroom activities, or within the community.

The program is completed in three phases—planning, implementation, and presentation—over the course of a semester. To qualify, students must demonstrate a proficiency in at least two subjects, be recommended by a careers teacher, and have an acceptable level of maturity and attendance. Eligible students are free to choose any area of interest for their project and are responsible for the research, planning, and delivery of it.

Doug Hickey is a Grade 10 and 11 math and careers teacher at Keswick High School and has been overseeing the Leadership Program for the past five years. This is the first time that students have been offered Cyber-Seniors as a choice for their leadership project. Cyber-Seniors was started by two high school sisters in Toronto who began teaching their grandparents how to get online, and has since grown into an international program.

Doug’s students mentor eleven senior residents, who range from 70 to 97 years old, in online communication tools such as email, Google, Facebook, Skype, and YouTube. He wants his students to understand that they are not merely teaching technology to seniors. “It’s so much more than technology. It’s about pulling out these memories, and making personal connections,” says Doug. “My students are learning and demonstrating patience, providing compassionate instruction, and using leadership models we have explored in class.”

The volunteers meet with residents once a week at Keswick High School for about two hours over an eight-week period, and receive basic training as well as a manual to guide their lessons. Some of the residents bring laptops and iPads to sessions that take place in the library. Many of the computers were gifts from family members, but had remained in their boxes until recently. Other residents sit in the computer lab with desktop computers.

When her husband died, Donna’s children bought her a computer. “But I was in deep grieving, and not sleeping or thinking clearly, so I never really did much with it,” she says. “When I moved to Cedarvale, I didn’t think I would bother getting the Internet, and then this opportunity came up, and it really got me interested. It’s opened up a new world for me, and it’s just a joy to be with these young people.”

Kaylin, a Grade 11 student, shows Donna the Mexican resort where her granddaughter had been the week before. They also look up the horse-breeding farm of a woman for whom Donna used to work—saving a picture from each website onto the hard drive. Donna’s homework is to obtain the Skype addresses of her great-grandchildren.

Bettie is reading an article about Errol Flynn on Vanity Fair’s website. Her student mentor Holly shows Bettie how to use the scroll wheel on the mouse, which she grasps easily, along with the double-click that almost every other resident is having trouble with. “I don’t have a problem reading off the screen,” she says proudly. “My eyesight is very good.”

At the desktop next to Bettie and Holly, Sam introduces 96-year-old Roy to Google. He keeps a printout of the program’s schedule in his pocket with some dates marked off. “I’d heard about computers. But I’ve never come face-to-face with one,” he admits. He likes watching war films on the retirement home’s big TV screen and was amazed to discover he could watch films on the Internet. Roy hopes to absorb something he can pass on to another resident.

The 80-year age gap between Bill and his mentor doesn’t bother him at all. “I just wish I was her age again,” he says. “School has changed a lot since I was a kid.” He speaks with a deep Scottish brogue despite having lived in Canada most of his 97 years. He used to be able to touch-type in the army and now feels more competent on the iPad because less typing is required.

“I can’t get it [the mouse] to do what I want!” laments Nancy to Coleton, her mentor, and starts typing with one finger at a time. The dexterity in her hands is limited, but she’s determined to learn. “I’ve just enjoyed this so much,” she says while writing a joke in an email to a friend. “I’m not sure he [Coleton] will find it funny. It’s a woman’s joke.” It seems however that most of the other seniors have heard it before; several times, in fact. “Oh, the ‘three wise men joke,’” one of them shouts over, rolling his eyes.

Coleton and Nancy search for her former home in Birmingham, AL, using Google Maps. They find the street and “walk” along it as Nancy becomes increasingly excited at recognizing a street corner, then a building or two, until eventually she is looking at the house that she lived in 30 years ago. She points her finger at the building on the screen with happy tears in her eyes.

Kay thinks her 16-year-old teacher is amazing. “When I finished high school, I knew less than half of what they know today,” she says. Despite her limited exposure to the Internet, she has a remarkable awareness of online security. “I don’t know how to get out of it [the Internet browser]—and anyone can pull up anything I’ve had on there before.”

Sometimes the intergenerational divide can prove difficult when it comes to translating computer language the teenagers have used all their lives. “Terms such as ‘browser’ need to be simplified,” says mentor James. The most enjoyable part of his experience has been listening to John’s life stories. John was a missionary who travelled all over North America and has lived in many remote regions. “I love seeing his reaction to Google Maps because he hasn’t been to these places in fifty years,” shares James. “I tell him, ‘Well, that’s what it looks like now!’”

Doug says that the program really shines a light on what we take for granted. “One of the things we learned is that when a senior is using the mouse, and they run into the keyboard, they move the keyboard out of the way,” he explains. “We chuckle at this because it is so fundamental to us—but not to them.”

He learned about the program through Emily Curcuruto, a lifestyle consultant at Cedarvale Lodge. They worked together for a month to figure out how the model should look. “Cyber-Seniors ties directly into the content I’m delivering. At the same time, we have a lot of youth that are very good at using social media, but maybe not so good at human interaction. I wanted them to learn the value of developing a personal relationship.”

There are also additional benefits for seniors in accessing memories. When one of the residents found his childhood home on Google Maps, he found a nearby dance hall he used to go to, and spent the rest of the period talking about this time in his life.

After Doug described the program to his students, eleven of them opted to make Cyber-Seniors their leadership project. It was an easy choice for mentor Krystyn. “This way, it was guaranteed I would make a difference with someone,” she explains.

Following the completion of the program, a graduation ceremony is held at Cedarvale Lodge. Residents wear the traditional academic cap and gown and are accompanied by their mentors into a decorated hall full of family and friends.

One resident of the program, who grew up in Europe during the war, never had the opportunity to graduate high school. “At that time, not many people, especially girls, went on to higher education,” she says. “We didn’t have graduations. We just had to start working.”

Many of the residents have great-grandchildren who they are now in contact with through social media, thanks to the Cyber-Seniors program and the student mentors. They have been able to connect with others over the Internet, explore topics of interest, learn about new ones, and access different sources of entertainment.

Cyber-Seniors has helped the seniors maintain relationships and access memories while offering students an education in leadership, patience, and intergenerational understanding. The program is now being introduced in all of Sienna’s residences in Canada in partnership with local high schools, proving that it’s never too late to start learning.

Drew Tapley is a writer with Sienna Senior Living.