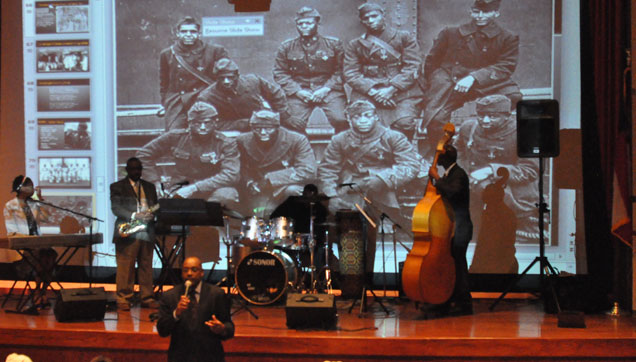 Educators teaching history may find guidance in the genius of Miles Davis’ advice to musicians, “Don’t play what’s there, play what’s not there.” In 2011, while I was working as a curriculum coordinator for the Richmond County School System, our student achievement data revealed a steady decline in student performance in U.S. History. This course was a requirement for graduation in Georgia so we urgently needed to reignite students’ interest and empower teachers.

One of the challenges we faced centred on the lack of diversity in the U.S. History curriculum. The American story is a mélange of triumph and tragedy of people from across the globe seeking to create. Yet, the curriculum in the United States comprised mostly of a monolith of Eurocentrism, negating the significant cultural impact of Native Americans, Africans, and Asians whose lives provided the canvas upon which the American portrait would be depicted. This inspired us to develop a project called Taking Notes: Jazz and the American Story, to help those students struggling with history.

The project—a multi-sensory presentation—engaged students visually, musically, and verbally. I shared interesting highlights from American history for 2-3 minutes and a live jazz band followed with a selection from the time period, sparking a discussion. For 90 minutes we walked students through a survey of American history with Jazz as the soundscape. Drawing from oral history tradition and the power of music, we created a memorable experience for students and teachers that could be replicated in the classroom. The contents of the presentation drew upon the existing curriculum, attempted to fill gaps, and made the content more relevant to the lives and culture of students of colour.

The presentation opened with a discussion about the uses of the drum and its importance in the lives of Africans, long before they were brought to the Americas. We presented students with images of the civilizations of West Africa to help them conceptualize the complexity of African cultures and the impact of slavery. This helped students understand the importance of music in the lives of people from whom everything had been taken. Students were introduced to a sampling of musical instruments that originated in Africa and subsequently, came to the Americas in the memories of enslaved people. Most students were surprised to learn that the banjo and the xylophone had African origins. As the program progressed, they met familiar faces such as Louis Armstrong and Cab Calloway, as well as the not so familiar faces of Thelonious Monk and Mongo Santamaria. We also discussed Jazz as a way for musicians to express artistic freedom in a society of racial oppression.

Once the idea was developed, we began the planning phase. A local community organization, Garden City Jazz, had been hosting free Sunday evening jazz concerts in downtown Augusta for several years. The director of the event, Karen Gordon, was a local jazz legend and champion for the Arts in the city. She became an instrumental community partner. She met with the curriculum director and me to discuss the logistics: which schools would we visit? How many musicians would be involved? What expenses would the project incur? How would it be funded? We found resources that could help teachers make their own connections with the content, the music, and the students in the weeks after the presentation left their schools. The musicians who formed part of the project were Karen Gordon (piano), Dave Weston (bass), Joe Collier (trumpet), and Not Gaddy (drums). Weston and Collier had been key players in James Brown’s band and had played in their own jazz bands in recent years. Gaddy had developed a successful program for public school children called I Drum 2U, exposing them to the history of the drum and therapeutic benefits of drum circles. We met for several rehearsals, discussing the design of the lesson, the timing and sequence of the musical selections, and the imagery that would serve as the backdrop for the presentation.

We also had to convince school administrators that this was an effective use of instructional time. In a survey of principals conducted by the Public Schools of North Carolina’s Department of Public Instruction, 91% of respondents believed that Arts integration was a critical component to educating the whole child (Guindon, Huffman, Socol, & Takahashi-Rial, 2014). Students who are in classrooms where the Arts are integrated into their learning are more engaged in their work overall than students without those opportunities (The Kennedy Center, 2014). We wanted to leave high school history teachers empowered with ideas for using historical images, song lyrics, interesting stories and music to shatter the monotony of the classroom. Teachers needed to see the 90-minute session as a launch point for a new approach rather than a singular non-instructional event. The principals approved. Taking Notes: Jazz and the American Story achieved success because it evolved out of a discussion on student achievement data and a willingness to try a new approach. We wanted to introduce a concept that brought community partners into the fold to assist us with a school-based problem. It’s not uncommon for schools to open their doors to artists-in-residence for mural projects and art lessons, but we wanted to try something that was more closely aligned to the curriculum and would be fun and memorable for learners.

In planning this project, we learned so much about the challenges that teachers face in covering curriculum that spans hundreds of years. Our aim was to provide them with some autonomy to write their own creative instructional arrangements, taking into consideration different student interests and learning styles. It became an opportunity for us to model a type of instruction that addresses the much broader issues of the lack of access to the Arts in public schools and the inclusion of multiple perspectives when studying history. We can’t feasibly discuss the achievement gap without including the contributions of people of colour to the American story. As a result of this initiative, not only did student engagement increase, we also saw a 12% increase in student achievement in U.S. History. Teachers demonstrated a renewed interest in designing lessons that reflected student interest and an array of learning styles.

Beyond the Bandstand: Implications

Taking Notes: Jazz and the American Story lived as a research-based mechanism that helped us to enhance our curriculum. If we are to truly address the opportunity gap and curriculum breadth that challenge teacher effectiveness, what adjustments must we make in the design of instruction and the partnerships we foster in and around schools? Just as Bebop led to the decline of the Big Band era, we hoped that this Arts-based approach to professional development, modelling, and thematic lesson planning would help teachers as they sought to recapture their students’ attention. And when the music changes, so does the dance.

Andre Benito Mountain is a school administrator with Tacoma Public Schools in Tacoma, WA. He was previously the K-12 Social Studies Curriculum Coordinator for the Richmond County School System in Augusta, GA.  He is currently a doctoral student in Curriculum Studies in the College of Education at Georgia Southern University.