Welcoming Refugees Into Your Classroom 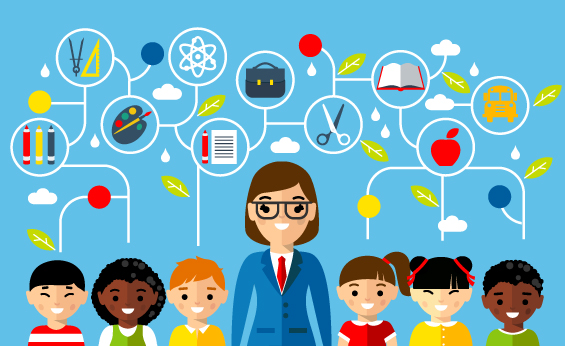 Adele Rezai recalls a few girls opening the windows of her classroom saying, “Let’s get the air of (those) kids out.” It happened quickly, as a class for students learning English was leaving and Rezai was preparing for her next—geography. In the 20 plus years she’s taught in Toronto, Rezai calls this one of the worst things she’s witnessed.

“My geography lesson in that session changed into talking about human geography,” Rezai says. She explained how those comments had “connected the smell with a certain group of students in our school.”

For her, it’s personal. She and her daughter arrived in Toronto in November 1985. Originally from Iran, they had spent months in a dusty, crowded prisoner of war camp, near the Iraq-Saudi Arabia border. Rezai taught herself English by reading books supplied by the International Red Cross.

She came to Canada with a strong resolve. “I made this commitment and promise to do my best and make it home.” In Iran, she’d taught high school. Here, she worked in factories and offices before attending teachers’ college and beginning to teach.

She particularly enjoys working with refugees. “I lived this life,” she says. “I experienced this life.”

Not every teacher has done the same. As thousands of Syrian refugees settle in North America, many teachers may be working with such children for the first time. It can seem overwhelming. Teachers may not even know that a new student is joining their class, let alone familiarize themselves with the conflict their students have escaped. Refugees arrive regularly, but the large numbers coming in a short time make this situation exceptional.

If teaching refugees is an exceptional circumstance, perhaps because it magnifies essential qualities of all good teaching: rediscovering the importance of learning; responding to students’ needs appropriately; listening to their stories and exhibiting resilience.

“Teachers need to be reassured that they have a lot of really great skills and knowledge about how to work with students,” says Kristiina Montero, an education professor at Wilfrid Laurier University in Waterloo, Ontario, who studies how refugee children learn English.

Effective strategies for teaching refugees work for all students. Everyone benefits from calm, structured environments and regular routines. All new students need a buddy to show them the school and play with them at recess—whether moving across school boards or the globe.

Refugee students have undeniably come from situations vastly different from their classmates. They’ve fled their homes often because of persecution and war. Some have endured gruelling journeys over land and sea, often without clear destinations. Safety is not guaranteed. Some have hidden in jungles or had their homes destroyed. Children have seen their parents shot. Some have been abused, tortured. Resettlement brings additional stress: moving to a new country, learning a new language, meeting new people. They’re not just looking for a better life; they’ve fled for their lives.

Education is key to their future.

“The hope of education is the only way out of poverty or the harm they’ve experienced,” says Jan Stewart, a University of Winnipeg professor and author of Supporting Refugee Children: Strategies for Educators.

It’s a hope deferred and disrupted. Students may not have attended school for years. The impact of trauma may create learning difficulties. Nightmares may make them sleepy at school. They could be hyper-vigilant and scared to leave the classroom or withdrawn and silent. Their parents may not be able to help them because they don’t understand the language, or are working multiple jobs. The children may be working, too. They may be uncomfortable asking teachers for help. In some countries, teachers are seen primarily as authority figures, not people with whom students can have relationships, says Stewart. Their parents may not be used to interacting with teachers, either.

People often assume all refugees are illiterate. “That’s not true,” says LeeAnn Brownell, an English as an Additional Language (EAL) teacher in Halifax. “Heaven forbid that something could happen to Halifax and we could become refugees. I’m literate. I’m a professional.” Most refugees do have language skills, just not necessarily in English. (Those who have very little language skills, even in their first language, may receive additional supports. Some jurisdictions have specific classes for students in this situation, different from traditional English as an Additional Language settings.)

Support varies. Students may work with an EAL teacher within the classroom for certain periods. They may receive additional instruction outside of the classroom, or a combination of both. But there are still things classroom teachers can do. It’s important that students use their first language. This could mean allowing them to write some assignments in their first language. Teachers can translate using Google Translate or ask a student who speaks the same language to help translate. Brownell encourages teachers to hang flags from different countries in the classroom or display signs in various languages. She often encourages students to create signs with months, days of the week, colours, and numbers written in their first language.

Every student learns and adjusts differently. Achievement might be a day without crying or holding a pencil properly. Teachers shouldn’t worry if students take longer to learn things or assume they need individualized learning plans. “Every aspect of the children’s lives are changing, so I think the teachers don’t have to be so hard on themselves,” says Brownell.

Details can “come out of nowhere,” says Brownell. Once, when teaching about managing stress, a boy matter-of-factly described his best friend being hit by a tanker while they played soccer. He was confused when Brownell, unexpectedly, became teary-eyed. Students talk about bombs and explosions and “then they just change the topic and settle down to work,” she says.

Teachers need to listen, validate a student’s experience, and comfort them if they exhibit signs of distress. But teachers aren’t therapists. If a student shows considerable distress, teachers need to refer them to trained counsellors. It may be appropriate for a counsellor to ask, ‘Did you see someone get shot?’ but not for teachers. Don’t force students to share.

“It’s not always good to have to tell their story,” says Stewart. It can re-traumatize students. “We have to respect the fact that some people are very closed and don’t want to do that.”

Situations shouldn’t be sensationalized. “We have to be really careful with our perspective of people who have come from countries where they have conflict,” says Stewart, “because in many cases, their stories are of resilience and strength and hope, and they’re a lot happier than even a lot of us.” Schools need to meaningfully help—not just feel pity.

“They’re very resilient. They’re strong,” Stewart says of refugees. “They probably have more personal skills than you do, so let’s stop looking at this as a pity party.”

Resettling Syrian refugees will end. Other topics will dominate news and politics. But teachers will still welcome refugees.

In some ways, welcoming a refugee child resembles arriving in a new country. People are scared and bewildered. They need to ask for help. Mistakes are made, lessons are learned. It might be a hard job, but teachers love it. Joy is always possible. That resilience makes teachers like their students.

“I was kind of embarrassed about being a refugee when I was younger,” says James Nguyen, who came to Canada from Vietnam in 1981. He was six, and learned English quickly. But his Vietnamese name, Lam, left him vulnerable to name-calling such as, lamb chop. Money was tight. “When you don’t have much, you just don’t miss it,” he says. He was confused when classmates suggested Santa Claus didn’t give him many gifts because he’d been bad.

Teachers need to be aware of these social pressures, says Nguyen, who quickly recalls those who involved him in sports or explained why name-calling is wrong.

They also need to remind students of hope.

“You may not be proud of it now because kids might make fun of your clothes,” Nguyen, who has sponsored refugees, says, “but one day you will be proud of who you are.”

Meagan Gillmore is a freelance writer and editor in Toronto, Ontario.