Giving Gen Z an “A” in Entrepreneurship 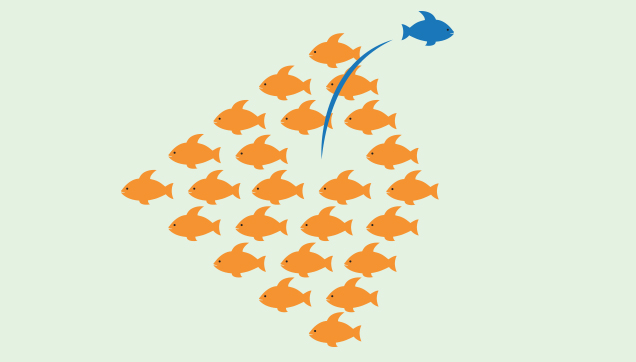 “They all kind of thought with the way the entire world is going, it might actually be a unique opposition to create more of a traditional book,” explains the teacher from St. Michael Fitzroy School in the Ottawa Catholic School Board.

It wasn’t completely surprising; he’d taught these students in Grade 7 and knew their strong literacy skills. He wanted a year-long project they would run like a business.

Much of the process was traditional. Research: a trip to a bookstore revealed hundreds of self-help books for adults and only a few shelves for youth. The students reported on these titles’ strengths and weaknesses. But their book’s content, and how they’re collecting it, garnered national attention. In June, they won a National Student Innovation Award from The Learning Partnership and the Bank of Montreal. These annual honours are the culmination of The Learning Partnership’s Entrepreneurial Adventure program that strengthens students’ entrepreneurial skills by matching classes with business mentors.

Nolan’s class named their book teenMINDS (Mental Illness Needs Different Solutions). Realizing that a group of 13-year-olds in Ontario couldn’t represent the needs of all youth everywhere, they used different solutions to fill its pages.

They ran a contest online asking for art and writing submissions from 12 to 23-year-olds about topics ranging from suicide and eating disorders to play, money, and relationships. Winning authors are published in the book. Entries have come from across North America; some from Indonesia and Australia.

A few years ago, this may have sounded far-fetched. That’s not as true now. Schools across Canada are teaching children to start their own businesses. Entrepreneurship “is coming up in conversations all the time,” says Akela Peoples, President and CEO of The Learning Partnership. The non-profit supports, promotes, and advances public education by creating partnerships with various stakeholders, including the business community. Many of its programs focus on preparing children for the workforce, including entrepreneurship.

There’s good reason for this focus. In 2012, companies with less than 100 employees accounted for 98 per cent of Canadian businesses. Between 2002 and 2012, more than 75 per cent of private jobs were created by small businesses.

Children and youth born after 1995, “Generation Z,” want to become entrepreneurs. Last year, New York-based advertising agency sparks & honey, found 72 per cent of high school students want to start their own business; 42 per cent of children in Grades 5 through 12 said the same.

They don’t think they’re ready. Less than half of Grades 5 through 12 students said their school offered classes in starting their own business.

It requires more than teaching business skills. It means developing students who are innovative, confident in their ideas, and able to meet their goals—especially when faced with adversity. This makes entrepreneurs successful, says Milan Baic, founder of Cordon Media, a Toronto-based agency that creates digital tools for businesses. Baic, 28, started it when he was 21, shortly after graduating from York University. He’d never written a business plan or invoice. He only had desire.

“That’s like your paddle on your boat,” he says of why students need to learn characteristics like creativity and perseverance, and not just business skills. “You’re going to give someone a boat, but you’re not going to give them a paddle (if you don’t teach students these “soft” characteristics).”

“Kids are like sponges; they have so much knowledge,” says Jennifer Cartwright, a former teacher who works as a youth entrepreneurship coordinator with the Northern Ontario Youth Entrepreneurship Initiative, a program run by the Northern Ontario Northern Claybelt Community Futures Development Corporation. Cartwright does in-class workshops to introduce students to entrepreneurship. Activities help students imagine businesses that would fulfill a need in their community, or design their own business.

“We get to seize some of their unique ideas. There’s no limit to what they think they can achieve,” she says.

Teachers need to give guidance so students can attain these goals. Samantha Lossier, another youth entrepreneurship coordinator, says creativity can be shown in practical ways. Each summer, she helps run Youth Enterprise Camp, a week-long camp that encourages entrepreneurship. Participants start a business for a day. They create and sell products. One year, a student was considering how to promote his product. He decided to fill balloons with paint and attach them to a canvas. People would burst the balloons with darts, and their names would be added to a draw to win the painted canvas. The leaders were excited, but concerned about safety, Lossier recalls. They asked the student to modify the idea. He reversed it. Instead of throwing darts, people threw paint-filled balloons at nails on the canvas.

“The end result is the same,” says Lossier. But what’s most important is the student got there himself.

Teachers must be creative, putting aside some of their expectations of what a classroom should be and look like, and let students experience the creative process. “We don’t even know what the workplace will look like by the time these kids are entering the workplace,” says Nolan.

This means reaching out to others. Entrepreneurs may have great ideas, but their ideas will never grow without networking. Students learn by doing, but they also learn by example. Teachers need to lead the way by asking to hear others’ stories.

“It’s very rare for teachers to have first-hand experience with entrepreneurship,” says Peoples. Business people and educators want to help each other, but may find it difficult to bridge the differences of the two fields. But most entrepreneurs want to share their knowledge. (They have plenty. In 2011, almost half of small business owners were between 50 and 64-years-old. More than three-quarters had more than 10 years of business experience.)

Some schools have initiatives built around networking. For several years, students at Jasper Place High School in Edmonton have gathered in an old welding room to plan and host events and learn about how to make their ideas a reality. It’s called the Global Café, but it doesn’t focus on food, although a breakfast program runs out of the space. At the Global Café, students bring ideas concerning things they’d like to explore in the school or in the community. Coordinators connect them with people who are resources and can help.

“We’re really missing the boat in education by not giving students the chance to network and develop their voice,” says Julia Balman, a Global Café coordinator who helped launch the initiative. She connects students to community organizations. They’ve formed relationships with local politicians, advocacy organizations, and businesses. The Global Café hosts a living library where community members become “books,” telling students about their lives. Students can “borrow” them: meet with the speakers to learn more. Entrepreneurs have been involved; some are helping the students open a café at the school. Students will run the business as a board; all profits will go towards other student projects at school.

This community focus is crucial to social entrepreneurship, a growing trend in entrepreneurship education. Social entrepreneurship means creating businesses that are built in ways that consider support and benefit the community, explains Angela Taylor, education facilitator at the Centre for Entrepreneurship Education and Development in Halifax. It’s more than donating some profits to charitable causes. Instead, the business model and practices themselves address community needs. This may mean using local ingredients at a restaurant or partnering with relief organizations overseas.

In some places, simply starting a business benefits the community. Taylor travels to schools doing workshops to introduce children to entrepreneurship as a viable career option. She often hears students say they plan on moving to Western Canada for work. “They think that’s the only option of life. So (teaching entrepreneurial skills) is a way of saying, ‘No, there’s a lot that you could do here.’”

The same is true in Northern Ontario, where many communities depend on single industries and average incomes are much lower than in the rest of the province.

“It’s important to give kids positive experiences and tools when they’re young because then they’ll look at this as an actual opportunity,” says Cindy Reasbeck, youth entrepreneurship advisor for the Community Futures Development Corporations in Northern Ontario.

Participants in Northern Ontario Youth Entrepreneurship Initiative programs are more likely to start their own business, or be employed, or stay in the community. Regardless of their final career or residence, they are more likely to have higher traits of responsibility and creativity.

“You’re instilling confidence in them and then planting that seed and then changing culture,” Reasbeck says.

The class chose to pass on the project to this year’s Grade 8 students. The transition wasn’t too difficult; Nolan made sure one of those students was involved in the project last year. But continuing the project has required innovation. Because this year’s class isn’t as strong in literacy, teenMINDS runs as a club at lunch for interested students. The contest has also changed. Last year, the contest ran in the spring.  But that made it difficult for older students who were completing exams or starting summer jobs to submit work. This year, the contest will run from January 15 to May 15. Submissions will focus on solutions rather than problems, and run at a different time of year.

The motivation remains the same. This project isn’t just about students learning the value of business; it’s about them learning to value themselves, and others.

“Everything we did was built around empathy,” says Nolan. Giving other youth a helpful resource motivated the book’s creation. In the second year of the project, Nolan is still finding how necessary books like this are.

Those are skills needed in any business, or any part of life.