Interrupting and Other ‘Bad’ Class Behaviours 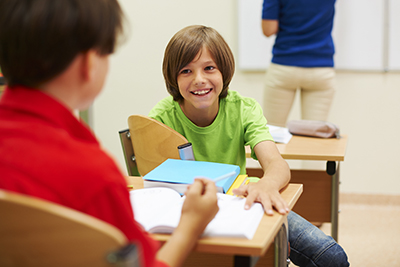 It’s quiet reading time. You ask students to grab a book, take a seat, and glue their eyes to the page. All is well for about four minutes. Then two chatterboxes start whispering. The clown at the back is making fart noises. The silent one claps hands over ears and the debater starts an argument about the merits of reading at home while the absentee slips out to check the Lost and Found for the third time this week.

None of these kids are maliciously trying to sabotage reading period. In all likelihood, they want to succeed. “If they’re not doing well, then something is getting in the way,” says Jeanne Williams, an Edmonton-based psychologist. It’s an educator’s job to find out what that block is and find a solution with the student. Perhaps social issues make them clam up during group work. Lagging math skills means they’ll chat to avoid the work sheet. Or maybe they’re just plain bored because the reading level is too easy so it’s more fun to make rude noises.

In a lot of cases, chatting, disruptive noises, and leaving class are addressed by a reward-punishment system. “So we look for the right reward or punishment, we don’t look for what’s in the way,” says Williams. “We have the wrong lenses on as to why kids are misbehaving. It’s important to change the lenses.” Finding a solution is not about bending over backwards for the student, it’s about figuring out how to get to the goal in a way where the student and the teacher are comfortable.

To find that solution, we must keep in mind that one size does not fit all. “Each situation is very different, just like each child is very different,” says Rebecca Lewis-Zarkos, a Grade Four teacher in Toronto. “Strategies that I use with my Grade 4s wouldn’t necessarily be as effective with younger or older grades.” A lot of the time we put everyone together. But they each have their own unique style,” says Julie Romanowski, an early childhood consultant specializing in children’s behaviour and discipline, based in Vancouver and the lower mainland. As a teacher, the top goal is to effectively communicate the lesson. Considering that each child is an individual, Romanowski says the first question should be, ‘How can I change or adapt my style to all of these students in order to be effective?’

That question is easier to ask than to answer and it starts with observation and conversation. “As adults, as authoritative figures, we often jump into fixing the problem without knowing the problem,” Williams says. It’s important to have a conversation first, but starting up a conversation with the chatterbox in the middle of reading time won’t work. “It needs to be proactive,” says Williams. Ask the student to have lunch with you or stay in for recess. Bring up the issue and try and find out what’s in the way. (‘I’ve noticed you start talking to your neighbour during reading time. Why do you think that is?’) “Then tell them your concern,” Williams advises. (‘I’m worried because you won’t get the same reading practice as everyone else and it distracts classmates.’)

Lewis-Zarkos usually pulls the student aside and tries to be upfront and honest regarding how their behaviour is affecting everyone in the classroom. “For the most part I find using this strategy, while staying very serious, and showing them you mean business, is pretty effective,” says Lewis-Zarkos. In some cases, she finds the student needs a consequence, sitting apart from friends, for example. But usually she leans toward very open and direct conversation as opposed to reward-and-punishment. In her short, two years on the job, Lewis-Zarkos has also learned there is a big difference between a simple apology (‘I’m sorry’) and taking full responsibility for behaviour. “From my experience, you are much less likely to see a behaviour repeated if a child has to fully reiterate it and apologize,” she reveals. (‘I’m sorry for pulling your hair while you were sitting on the carpet in front of me. I know that it probably hurt and I won’t do it again.’) This method helps them be more accountable, aware of their actions, and empathetic of the outcome.

The goal is to work with the student to find a solution. “Work together. This 100 percent meets the kid’s concern and 100 percent meets my concerns. I don’t even use the word compromise, [which would denote a 50-50 resolution],” Williams says. First have a conversation with the student, then let the parents know what is going on. “It’s not to get the kid in trouble. It’s more just to let them know you’re trying to find a solution,” says Williams. Also, talk to the parents about ways to carry the solution over into home life: chances are that if the debater argues in class, they likely argue at home too.

If the first conversation doesn’t yield a solution, just try again. “Kids aren’t always articulate. The first time you chat about this, they may not even know why they behave the way they do and so the solution is based on partial information,” Williams says. “It’s an art, finding out what the problem is.”

You’ll know pretty soon if your conversation and potential solution yielded results. “Behaviour is communication,” Williams says. The student’s behaviour during the week following your conversation will indicate if it worked. Sometimes it takes many tries. “But every time you have a conversation, they’re building cognitive skills and they’re working toward a solution,” says Williams. Theses skills can be used by students to solve issues between each other. “In Grade 4, they still love to tattle on each other about everything. I try to limit this and encourage them to solve their own problems with each other by using ‘I-Messages,’” explains Lewis-Zarkos. ‘I-Messages’ are phrases starting with ‘I’ that help students express their feelings about a given situation. For example, ‘I’m sorry I hit your hand. I was mad you took my favourite green eraser. I should have used my words instead.’

Sometimes, a teacher doesn’t have the luxury of waiting for a better time to have a conversation. What’s needed is an in-the-moment quick fix to help bring the focus back to the task at hand. “We know the background stuff. But in the heat of the moment you can’t rip open a text. You need a mental checklist,” says Romanowski.

First, validate their thoughts and feelings. Affirm that you’ve heard and recognized the child. “We all want the same thing, it’s human nature, and that is love,” Romanowski says. “Generally that boils down to the action of validation.”

Second, state the boundary and expectation. ‘I understand you need to check the lost and found. You can do that during lunch. Right now is reading time.’

Next, give them options. “Offer choices within a desired outcome,” Romanowski says. ‘Would you like to read a graphic novel or a fantasy book?’ “This allows them to still have their own unique style.”

Remember to give notification and allow time for processing or transition. “A lot of [bad] behaviour stems from anxiety or lack of confidence,” says Romanowski. Kids often are most at ease when they know what is happening next, otherwise they may feel anxious. As a result they may respond with behaviour that is typically labelled as ‘bad,’ like whispering to their friend or making jokes to help them feel comfortable. Continuously notify students, both on a grand scale and within subject, suggests Romanowski.

Always be consistent. Constant communication in the same way will help create stability. “It becomes a lifestyle thing. Inconsistency sparks insecurity,” Romanowski says. “The important thing is to set the pace and help kids rest assured. They’ll have lower stress levels and be less anxious,” she says. “The mind isn’t able to absorb any information until it has calmed down.”

Following those steps is something that can be done every day and can be tailored to any personality type: the chatterbox, the quiet kid, the debater, the disrupter, the absentee. In general, make sure you’re having conversations each time an issue occurs. The multiple-conversation method does take some time and commitment on the front end, but Williams points out that it saves time down the line. “If you’re worried about the 10 minutes it takes to chat once a week, just keep in mind that it saves class time and helps the student in the long run.” These conversations are also a great way to learn problem-solving skills. “It’s a long-term benefit,” she says. “Over time, kids who are reactive and explosive, having these conversations with them will help them learn how to solve the problem on their own.”

In many cases, the behaviour problems stem from a lack of something. Lewis-Zarkos tries to remember that she is simply dealing with another (little) person. “They are still learning and growing. I try to remind myself of this when I find myself frustrated by one of my students’ behaviour. While consequences are necessary in some cases, I find that in many cases giving a student what they are missing [some extra attention or a little extra praise] is ultimately a better solution.”

So, have that conversation, find out what may be in the way, and find a solution together. If nothing else, your student will be building those problem-solving skills they’ll need later in life. Their future teachers will thank you.