Expanding the World of Post-Secondary Options 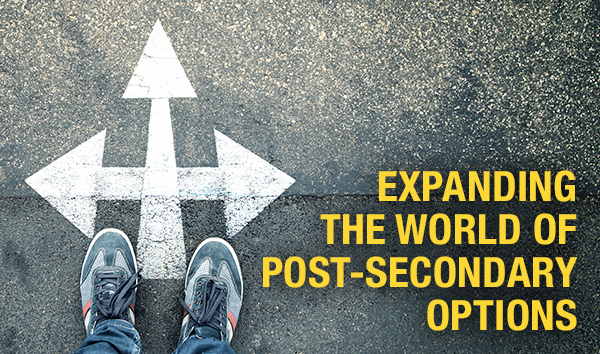 Assisting students with applications to college or university requires more than knowing about deadlines, online application procedures, program offerings or deadlines. For many teachers and guidance counsellors, helping students apply to post-secondary education means re-evaluating their own assumptions about where students should go for the best education.

Many teachers and guidance counsellors’ “life experiences are very much tied to the university world,” says Richard Wiggers, Associate Dean of Liberal Studies at Mohawk College in Hamilton, ON. He’s not opposed to university education—he has a PhD—but he doesn’t think a university degree guarantees a successful job, or that such a degree is more worthwhile than a college diploma. Because they don’t have as much experience with colleges, some may be less likely to recommend them to their students.

That’s a mistake, believes Wiggers. He works in the college system partly because he’s “a big believer in access.” Students of all backgrounds and academic capabilities attend college. High grades when graduating from high school don’t necessarily translate into a stellar university academic career, and high-achieving students shouldn’t be discouraged from pursuing a college education, he insists. At the same time, he adds that there’s often a belief that if a student has lower marks they are better suited for trades, and as a result, should attend college.

“There’s still this persistent belief that the kids who aren’t doing well academically are the ones suited to go [into] plumbing, electrical work,” says Wiggers, who comes from a family of tradespeople. “I always say to people that I don’t want the C-level students being my plumber or my electrician.” The trades require good math skills, he explains. These jobs are highly skilled.

Teachers need to be aware of labour trends, states Wiggers, but they shouldn’t simply repeat media stories that predict either a mass shortage of jobs or unlimited job opportunities in a specific sector.

“You can’t rely on the media to tell you what’s going on in the labour market,” says Wiggers. “Because it keeps changing all the time.”

Guidance counsellors, in particular, need to be especially prepared to help students who are considering applying for schools in other countries. It’s quite different for Canadian students to apply for an American school than it is to apply in Canada, for example.

Many Canadian students are attracted to American schools because of greater athletic opportunities, she explains. Even students who are pursuing athletic scholarships however, need to make sure they take the right courses and maintain good grades.

“They may not realize early on that they need to have academic classes,” she says.

Starting early is key when applying to an American school. Many suggest students write their SATs in Grade 11. Some schools and private tutoring companies offer SAT preparation classes for students.

Applications to American schools often require a personal essay, something not needed when applying to Canadian schools. This means students need to “determine how they’re going to sell themselves,” says Lihou-Perry. Schools want to understand the character of students, and if they’ve been involved in volunteer or extra-curricular activities throughout their time in high school.

“It is a lot of pressure,” says Liz Moruzi, a guidance counsellor and colleague of Lihou-Perry’s. “But I think the students that even consider it are your star academic students, or your star athletes (that) are already thinking (about) post-secondary.”

Schools also need to make sure they have a school profile with the College Board so they can better connect students with prospective schools.

The options for students are myriad. Moruzi describes it as “paralysis by analysis.”

“They get all these options. They’re overwhelmed. And then they’re not prepared to make any choices; they’re worried about making the right one or the wrong one,” she says. She encourages students to “just pick one path for now, not forever. And don’t let that forever stop you from taking a path for now. You don’t know unless you try it.”

Wiggers has heard students talk of picking their field of study based on what their parents think. Students need to have more of a voice in deciding what they study in post-secondary education, he believes.

“You should study what you love and be prepared to use the skills that you learn […] to be versatile and open-minded about the work you do,” says Wiggers.

Colleges and universities offer bachelor degrees, which typically take four years to complete. They can also offer graduate degrees. In the United States, a school may be called a “college,” but still grant degrees.

Post-secondary education looks different depending on the province or territory.

Quebec has a completely different college system. Students there graduate high school earlier than those in the rest of the country – typically at age 16 instead of at age 17 elsewhere. Students attend a college d’enseignement général et professionel (CÉGEP) for two years. They can either choose the professional stream that leads to the labour market, or the general stream that is a pre-requisite for attending university.

Universities grant undergraduate and graduate degrees. Bachelor degrees are typically four years, except in Quebec where they are three. In Quebec, New Brunswick, Nova Scotia, Prince Edward Island and Newfoundland and Labrador, only universities can grant undergraduate degrees. Some colleges in British Columbia, Alberta and Ontario can grant degrees.

Schools throughout Canada call themselves “polytechnics,” however only Alberta has two legally defined polytechnic institutions.

Education is only mandatory up to age 16. Education differs slightly between Great Britain, Scotland and Wales. Students must complete an exam after high school to determine if they are eligible for more education.

After high school, students can pursue further education or higher education. Further education is most similar to community colleges and focuses on vocational training. Higher education refers to institutions that grant degrees. They are universities. In the U.K., the terms “college” and “university” are not interchangeable.  The U.K. follows the standard order of undergraduate, graduate and doctorate degrees.