Uncomfortable Truths: What if Santa Claus was Gay? 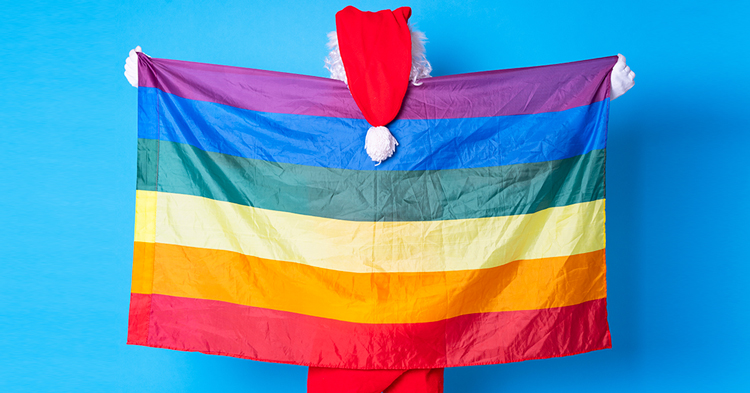 Society is not always as accepting as our laws would lead us to believe. Recent revocation of the 2014 Health and Physical Education curriculum in Ontario* is a testament to that fact. I currently teach at a Faculty of Education and often engage in serious, and sometimes spirited, conversations with my Bachelor of Education (BEd) students about LGBTQ+ issues in relation to school.

Sometimes, the concerns we tackle are about content implications, “What happens if a student [writes, says, draws, paints something] that is gay?” This is a curious trepidation for me, but it’s usually quickly followed up with the real concern, “What if a parent gets upset and thinks we are talking about homosexuality in class?”

Homosexuality has been decriminalized for 50 years and yet many teachers still worry about offending the values and beliefs of homophobic people. Fear percolates through teacher candidates. The teaching profession tends to be very conservative, seemingly projecting a “neutral” tone. The perception amongst future teachers is that you maintain the status quo: everyone is heterosexual until proven otherwise.

I press my BEd students to focus on normalizing difference in order to take away the fear. We work to think about relationships, to put aside the stigma of homosexuality and societal “norms” by focusing instead on affirming the complexity of relationships that exists among human beings.

My students have said to me, “What if I don’t believe in homosexuality”? I have told them, in no uncertain terms, there is no parallel between Santa Claus and being gay. You don’t get to “believe” or “not believe.” There will be students in your class, parents in your community, members on staff who identify as LGBTQ+. There is a world out there for which we are preparing our children, and that world includes people who identify as LGBTQ+.

Many aspects of our society are still unwelcoming and outright dangerous for those in the LGBTQ+ community. When I first started teaching in a classroom, I consciously chose not to put a picture of my husband on my desk because I knew that any teacher in my school in a same-sex relationship would not have the liberty to do likewise. Many might still refrain from doing so, because ostracization, stigma, and rebuke are still very real weapons with potentially devastating personal and career implications.

I share with my BEd students an experience I had as a school teacher many years ago. I took my grade 8 class to the local high school to see the senior students’ art show. There was a series of tasteful photographs of two men, naked and embracing. As I was looking at the images, one of my students came to look at the photos with me. He said, “This is very wrong, Miss. These pictures are bad and wrong.”

I saw this as a very teachable moment and asked what he thought was wrong. I knew the subject matter was troubling him, however, to normalize LGBTQ+ imagery, I chose to keep my questions within the realm of the principles and elements of design: “Do you not like the contrast? Are you concerned with the composition? The way the artist has positioned the figures?”

My student was very blunt, “Two men should not be holding each other that way.” So, I probed further as to what made him uncomfortable and then he turned to biblical teachings. I was not teaching in a faith-based school so I said, “We will have to agree to disagree about that aspect. However, we can examine the work in terms of composition, balance, etc.” He agreed to do so and then we moved on to examine other, less controversial pieces in the exhibition.

The next day, the student came to school and gave me a homophobic pamphlet and told me his father wanted me to read it. I repeated to him that, on this topic, it seemed we were going to have to agree to disagree. There was no further discussion with the student or his parents.

I share this story with my BEd students because it is important to understand that ideas and concepts can be explored and exposed in school, that we shouldn’t shy away from them. I think of how brave the high school art teacher was in displaying his student’s work and for providing the space for artistic expression. For the one child who was personally affronted by the subject matter, another student may have found his, her, or their identity affirmed.

I also remind my BEd students that parents have the right to have conversations about their beliefs; this is how dialogue occurs. Sometimes schools are places where difficult topics are brought up and the conversations can be furthered at home. Just as I try to include stories, images, and the voices of racially and ethnically diverse people, I also consciously work to include the work of those from the LGBTQ+ community. I use gender-neutral names or ensure same-sex families are represented in scenarios I provide. Sometimes it goes unnoticed and sometimes it results in a teachable moment.

During my classes, I also like to show my BEd students the documentary, It’s Elementary: Talking about Gay Issues in School. It’s dated (1996), but the messages and the strategies still resonate today, in particular the straight teacher who explains that she needs to be the one to talk about gay issues in school because it’s not seen as “her agenda.”

My BEd students typically connect with her stance and find the film gives them in-roads to opening up dialogue and normalizing multiple ways of being in the world. It helps them recognize what is taken for granted, such as gender-specific bathrooms and changerooms. It also opens up the space for conversations around the rainbow flag.

Many teachers are given rainbow stickers from their Equity and Diversity committees and they feel obligated to put them up. I caution my BEd students to think carefully about what this means: putting up a rainbow flag signifies you are an ally.

A rainbow flag signals to a student that they can come to you for help and guidance with LGBTQ+ issues. It means, that if you have concerns for a student’s well-being, enough to call their parents, you won’t out your student when you make that phone call. I caution them, that if they can’t be an ally in this way, it’s OK. Don’t put up the flag. It doesn’t mean they are homophobic. There are many ways to be an ally. Some may take different paths to get there.

I talk to my BEd students about the daily disruptions they should be attuned to in the classroom, in the hallways, and at recess. The shouts of “that’s so gay” and all the various, vitriolic expletives that are homophobic and transphobic. This is where the real teaching happens—explaining to a student why their homework, cannot, actually, be gay and challenging students as to why they use gay in a derogatory manner. Language and expressions often go unchecked.

I have brought in members of the Rainbow Coalition as a way of showing future teachers the resources available to them, especially if they are afraid. We play a game in which my BEd students are challenged to list all the negative, derogatory homophobic, and transphobic words/expressions they know. They are often timid at first (they are becoming teachers, after all!), but soon the floodgates open and too many responses are generated to record. I do this exercise to raise awareness of terms and slang they might not recognize.

Then, my BEd students are asked to do the same for expressions that are anti-heteronormative. They usually fail after two or three words and expressions (and they have come to the realization that many of the phrases they thought of are actually misogynistic).

We can infuse LGBTQ+ equity work into our teaching through subjects like Language Arts classes by using story books, short stories, newspaper articles, and novels that have LGBTQ+ content, and discussing themes of inclusion and acceptance with students. The history and perspectives of those who identify as LGBTQ+ should be told in the social studies, history, and geography curriculum. We can certainly infuse it through the arts and, despite the current embargo on the health and physical education curriculum in Ontario*, this is a subject where relationship and healthy self-image should be discussed, which includes affirming perspectives of those who identify as LGBTQ+.

Teachers have to be vigilant in interrupting the covert ways homophobia and transphobia seeps into the classroom by striving to determine what’s excluded and/or what’s not contested. The internet has a plethora of resources and strategies for teachers. Inevitably, my BEd students remark that finding all these strategies and ideas sounds like a lot of work.

Teaching is a lot of work! We have to go beyond the examples in the curriculum to consciously ensure all voices and ways of knowing are affirmed. Schools are places where, we hope, children are sent to be embraced for who they are so they can grow up to be adults and citizens who live productive, inclusive lives.

*Editor’s Note: The Ontario health and physical education curriculum has been revamped since this article was originally written. It remains largely intact, with the exception of some elements of sex education specifically being taught to older students.