It’s Alive! Teaching with Horror Stories in the Classroom 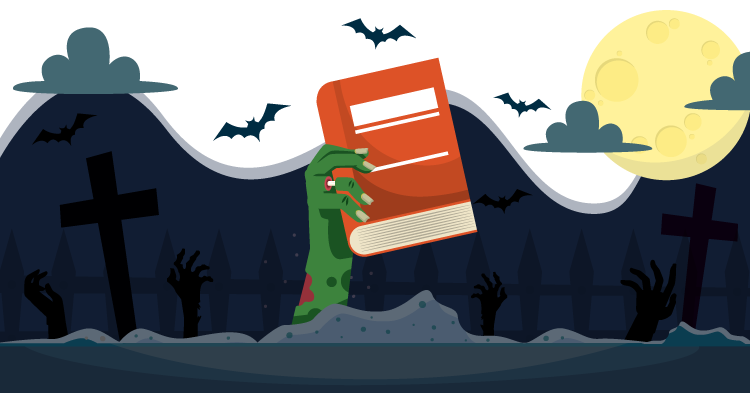 A challenge I face as an English teacher is not just providing my students with the skills they need to be active readers, but also finding ways to get them excited about reading.

Throughout my years of teaching, I’ve discovered that students are often more eager to read and discuss horror stories than other material. The genre naturally provokes excitement and a sense of morbid curiosity; even students who hate horror are still curious about what happens at the end. And, as an added bonus, scary stories can also teach critical life lessons and help kids learn to confront their fears.

When I was little, I was afraid of everything. I feared someone breaking into my house, the house burning down, snakes, monsters, the neighbor’s dog, and most importantly, the dark. I remember standing at the bottom of the stairs when the light went out in the hallway, too terrified to go up into the darkness.

“If you’re too scared, I guess that means you’ve been watching too much Scooby-Doo,” my dad would remark, and the implication that I’d be cut off from my beloved TV show was enough to send me sprinting up to my bedroom.

In present day, I was recently reminiscing with another teacher about Saturday morning cartoons, and of course Scooby–Doo came up. “I bet Velma was your favorite,” he said. “You’re kind of like her.”

I did always aspire to be Velma, but she was not my favorite. It was Shaggy. Why? Because Shaggy, along with his faithful pal Scooby-Doo, was scared. Despite this, he would always follow through, help his friends, and solve the mystery anyways. Shaggy had been my childhood role model in learning to overcome fear, and although my real love of horror didn’t start until I was in college, I like to think he helped kick-start my interest in the genre.

In 2013 I took a leap and moved to Shanghai to teach English at a bilingual school. A few months in, I remember telling a friend back home, “It’s like I’m playing a card game without a full deck.”

I prided myself on my pop culture references. I was young and had never had any problems connecting with my students back home. But in Shanghai, none of my students even knew Scooby-Doo. They did love Marvel movies, but I didn’t know any of the heroes’ names in Mandarin. On top of that, I quickly realized the students were so afraid of being wrong that they would hesitate to answer questions. Needless to say, it was difficult to connect with them. Something had to change.

It wasn’t my intention to inundate my classroom with scary stuff—that just manifested out of a need to find creative ways to get the students to communicate. It all started with a grade 10 Academic Writing class and On Writing by Stephen King.

The class spent the first semester reading the book together. Every other week, two or three students would be the discussion leaders for a Socratic seminar-style book talk. There were no quizzes or tests; I just wanted the students to be reading for information and for fun.

After the first month they had gotten used to King’s style and enjoyed his honesty as a writer. All students can be intimidated when you hand them a thick book, and second language students are no different. Many of the students I taught that year had never read an English book before. They always were given ESL texts and workbooks or editions of books adapted for children. Handing them On Writing was my way of saying, “I trust you. I believe in you. I know you can do this.”

One day we were doing an exercise from the book that involved an extract from King’s short story “1408.” The students were really curious about the story, so I turned on the 2007 film adaptation.

What was supposed to be a dalliance at the end of class turned into an epic movie day with the kids fulfilling all the stereotypes: some members of the class trying to encourage everyone to keep watching, others reciting “c’mon, guys it’s just a movie,” and the rest under their desks, hands over their eyes, watching between the cracks of their fingers but still refusing to let me turn it off.

The students learned important writing and storytelling techniques from the film, but the true beauty of this viewing experience was that it brought them all together and showed them it’s OK to be scared.

People who like horror know how much fun it is to see the latest scary movie in theatres. There is something about watching a horror film with a group that just makes it more entertaining. You can feel everyone’s bodies tense up when a jump scare is pending, then there are the yelps or laughs when it finally happens and the release comes.

Lessons to Learn from Horror

My students talked about the movie for months afterwards and I soon discovered that they were more willing to participate when we would discuss topics brought up by horror stories. No longer were they quite as reluctant to speak up in class for fear of being wrong. And more than that, they were so interested in the stories that they were able to push past their fears in order to join the discussion.

This is when I realized just how much of a motivator students’ morbid curiosity can be. They really want to find out what’s at the top of the stairs, or who’s hiding in the closet, or how the story ends.

Better still, once students can look past the scary stuff and see these tales for what they truly are, they’re hooked. The Shining is about a family dealing with addiction. Dracula is about loss of innocence and contains layers of repressed sexuality. Frankenstein has readers questioning true villainy.

Our kids are facing their fears every day. They open their social media accounts and see protests and riots and images of people they’re told are monsters. Allowing our students to be scared and empowering them to not only face those fears but openly discuss what makes them afraid is one of the most important things we can do for them.

I am a firm believer that horror stories provide the vehicle for these conversations. Not only do these stories spark an interest in reading, they also encourage students to start considering for themselves who are the true monsters wearing the masks.

Janel Sullivan is a caffeine-addict American living and teaching in Singapore. She has a morbid curiosity for things that go bump in the night and likes writing with really nice pens.