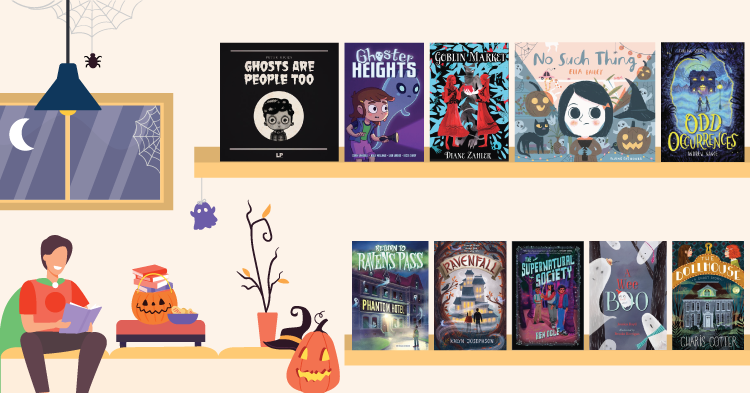 Halloween is almost here, and what better way to celebrate the spooky season than with some equally spooky books? Age-appropriate scary stories have been shown to get kids excited about reading, while also teaching them how to confront their fears, build resilience, and cope in difficult situations. That’s why we’ve compiled a list of 10 chilling tales for kids of all ages, just in time for October 31. These works contain stories of myths and magic, featuring vampires, goblins, ghouls, and more. Read on to discover some deliciously frightful books. That is, if you dare…

This heartwarming picture book is all about a ghost named Wee Boo who’s too cute to scare anyone. She’s running out of time to earn her haunting license—without it, she’ll never be a certified ghost. But when she ends up making a child laugh instead of scream, Boo discovers she might just be good at something after all.

Things start to get weird in this middle-grade mystery when a young girl named Alice finds a dollhouse that’s an exact replica of the house she’s staying in, where her mother works as a live-in nurse for the elderly owner. Soon a girl starts appearing in Alice’s bedroom in the middle of the night—a girl who looks just like one of the dolls in the dollhouse. Who is she, and how is she connected to the lady who owns the house? It’s up to Alice to find out!

Ghost Heights is a haunting tale of ghosts and grief. After losing her house and her mother, eight-year-old Ona moves into her Baba’s apartment complex. As she tries to recover from the traumatic events of her past, Ona starts seeing ghosts that haunt the other residents in the building. Using her newfound sight, she decides to help her neighbours free themselves from these ghoulish guests, but in the process, Ona must confront her own grief as well.

This gothic book follows Ethan Alby, the ghost of a young boy, as he tries to make friends with the “spooky living people” around him. Author and illustrator Peter Ricq pairs cheeky text with stunning pointillism artwork to create a Tim Burton aesthetic. Ghosts Are People Too also includes a list of ghost hunting equipment and note-pages so that students can record their own experiences with spooks and spectres.

In this delightful retelling of Christina Rossetti’s classic narrative poem, two sisters are swept up in a world of dark fairy tales and folklore. When Minka, the outgoing sister, is bewitched and poisoned by a goblin, her shy sister Lizzie must find the courage to rescue her. This enchanting fantasy blends elements of horror with the redeeming power of sisterly love. (Additional resources include a reading group guide.)

This fun Halloween adventure follows a clever girl named Georgia as she investigates why the items in her house keep moving around and disappearing. Is it the work of a ghost, or something even spookier?

Odd Occurrences is the story of a missing boy named Tobin who disappears after a visit to a creepy carnival, and his best friend Zeus who is determined to save him. The only problem is, the carnival has disappeared too! Zeus decides to start a paranormal podcast, encouraging listeners to share their supernatural experiences in the hopes of finding some clues to his friend’s whereabouts. People call in with all kinds of stories—from horrifying lake monsters to haunted dolls, but will these unsettling tales be enough to lead Zeus back to Tobin?

While on a cross-country road trip, a boy named Patrick and his family stop in the spooky town of Ravens Pass. They check in to the town’s only hotel, but don’t realize that it’s already full—of ghosts! And if the family can’t get out by sunrise, they’ll be trapped forever. Can they make it out in time? Students will be eager to find out as they race through this chilling thriller, complete with eerie black-and-white illustrations.

Ravenfall Inn is a magical B&B located at the crossroads of the human world and the Otherworld. It’s run by the Ballinkay family, who all use their psychic powers to contribute to the inn’s upkeep. All, that is, except thirteen-year-old Annabelle, who’s only ability is to foresee death. When a teenager named Colin arrives at the inn, searching for his missing brother and the supernatural creature that killed his parents, Anna jumps at the chance to help. But as she and Colin begin working together to delve into his family’s mysterious past, Anna starts to think she might have bitten off more than she can chew.

Readers will be scared silly in this hilarious book of monsters, magic, and myths. When Will Hunter moved to East Emerson after his parents got divorced, he thought his life couldn’t get any worse. But when he suddenly starts seeing monsters everywhere and all the pets in town go missing, he realizes he was wrong. Now it’s up to him and two other sixth graders to figure out where the pets have gone, and uncover the mysteries of their monstrous home.