How to Calm Explosive Student Behaviour 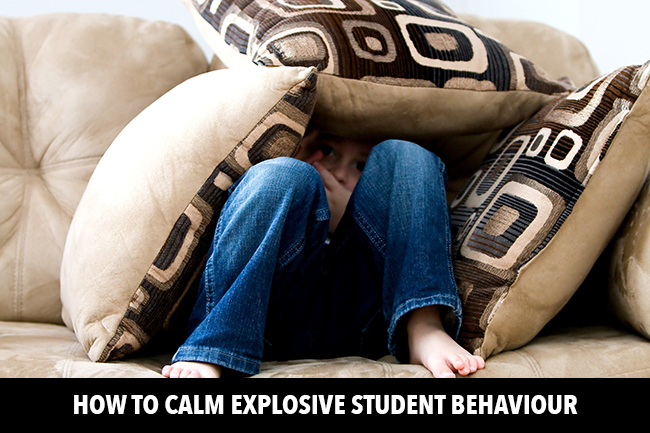 An inability to function socially or emotionally is as much of a learning disability as the inability to read, says acclaimed child psychologist Dr. Ross Greene. He speaks at seminars on treating behaviour problems and explosive outbursts. “The tragedy of our time,” he says, is that few recognize and treat explosive, noncompliant behaviour as evidence of a learning disability. And so, these youth worsen rather than improve. Categorized as manipulative, unmotivated attention-seekers, they do not receive help. Withdrawal of attention, punitive actions, and rewards and consequences often further impair their lives.

In the past, students with reading problems were considered lazy or stupid. They are not regarded this way anymore and they receive the help that they need. Greene predicts that students who have difficulty being flexible and tolerating frustration will eventually be perceived in a new way by educators and the rest of society. These students, who often act explosively due to a brain deficit, will finally be recognized as learning disabled and will get assistance. For Greene, who lectures and writes on the subject and who founded the Collaborative Problem Solving Institute at Massachusetts General Hospital, help can’t come too soon. As Greene has seen, application of his philosophy and approach has dramatically affected those to whom it has been applied, including juvenile offenders in the State of Maine. Their rates of recidivism plunged significantly in response to Greene’s philosophy and approach.

Central to Greene’s philosophy is this: If children can do well, they will. When children can’t or don’t do well, it is because they cannot. Greene believes all youth are motivated to succeed. When they don’t succeed, it’s because something gets in their way. It is not “passive, permissive, or incompetent parenting,” but disabilities in the “domains of flexibility and frustration tolerance,” that cause problems. These weaknesses typically stem from deficits in one or more of the following skills: executive abilities (such as being able to shift mindsets and to organize), language processing, emotion regulation, cognitive flexibility, and social abilities.

If children can’t do certain things, we must figure out why and help them—substituting as a “surrogate frontal lobe,” for as long as they need it, says Greene. This way, we help youth develop skills of flexibility, frustration tolerance, and problem solving. And just as children who overcome reading problems do not need to be read to forever, youth who learn to handle frustration and their lagging skills and triggers will eventually cope independently too.

What happens, however, when we ignore such students? Greene shows seminar participants a cartoon of a lifeguard nonchalantly watching a child drown. “We’re encouraging people to become involved in their own rescue,” the lifeguard tells the child’s parents.

“Say, in this situation,” says Greene, “we label the inability to swim ‘attention seeking’ and hold up a dollar and say, ‘If you swim here, you can have the money.’ Well, what if the child can’t swim to the dollar? Then, we lose the child.” When we ignore challenging or explosive youth, we are as negligent as that lifeguard, he says.

Many youth at risk of drowning psychologically, legally, or in other ways are diagnosed with syndromes such as Attention Deficit Hyperactivity Disorder (ADHD), Tourette’s Disorder, Asperger’s Syndrome, Bipolar Disorder, and so on. Some youth don’t merit clinical diagnoses but exhibit symptoms and behaviours similar to those exhibited by students with disorders. No matter where youth place on the mental and emotional health spectrum, Greene prefers to focus on their skill deficits and triggers instead of on their diagnoses or lack of diagnoses.

Teachers, he says, can help these students cope. First, teachers must hold group discussions with school resource staff, administrators, and parents. The goal is to reach an informed consensus on the top one or two lagging skills and triggers causing a student’s problems. On his website, Greene gives examples of potential “pathways” that can lead to problems. Although a student may have many deficits and triggers, it is only productive to address a couple of these issues at once.

For instance, students with inadequate language processing skills (not necessarily deficits detected by speech therapists) may be unable to articulate problems. They may react angrily or sullenly to frustration, saying things like “I don’t care.” “Ninety-nine percent of the time, they care,” says Greene. He recommends teaching these students useful sentences that may help more than stickers or detentions:

Greene also explains that “Reward and punishment systems, including suspensions from school, won’t help someone who doesn’t understand how to enter groups or start conversations. If he could do it, he would.” Instead of using rewards and consequences, Greene recommends solving problems collaboratively with these students. He wants students to critically evaluate problems and solutions and become lifelong collaborative problem solvers.

So, what is collaborative problem solving? First, what is it not? Greene talks of three ways to address problems:

Plans A, B, and C. Plan A is an imposition of adult will, whether through rewards and consequences or commands. Plan C happens when teachers decide to let something go. If a teacher begins by imposing her will, however, and then drops the issue, it’s not Plan C but a failed Plan A.

Plan C should be used more with these students than Plan A, says Dr. Trina Epstein who uses Greene’s approach with her clients and teaches educators about it. Epstein, a clinical psychologist at the Tourette Syndrome Neurodevelopmental Clinic at Toronto Western Hospital, trained and worked as a school psychologist. If you can’t address an issue with Plan B (collaborative problem solving), it’s better to use Plan C, she says. When dilemmas arise, especially with challenging students, Greene encourages teachers to ask themselves: Is this a concern for me? If not, drop it.

Plan B, collaborative problem solving (CPS), is the meat in Greene’s therapeutic sandwich. It’s an approach that’s useful with anyone but especially with “explosive kids who don’t have Plan A brains—they’ll blow with Plan A.”

Plan B or CPS comes in three compulsory steps, which must be done in order.

Step 1: Empathy and Reassurance – Mirror students’ feelings back to them, checking if you’re not sure what emotions they are displaying. Often, the simplest way to empathize is to repeat students’ words. “You don’t feel like sitting today. You’re feeling restless and bored. What’s up?” Empathy and reassurance help calm the student (who can only think when she’s calm) and assure her that you’re not imposing your will upon her. If Plan B fails, Step 1 was probably missed.

Step 2: Define the Problem – It’s vital to define your concern and the student’s concern. “You’re feeling restless and want to walk around the classroom. My concern is that you’re distracting the other students.”

Step 3: Invitation to Solve the Problem – Invite the student to brainstorm solutions to the problem. The student is not solely responsible for finding a “doable and realistic” solution but gets first crack at it. An adult can offer, but cannot impose, a solution. You might say something like, “How would you feel about delivering my paperwork to the office when you feel restless? Would that work for you?” A solution is only doable and realistic if it addresses the student’s concern and the teacher’s concern. If solutions fail, begin again. Teachers who enter Step 3 of Plan B knowing what the solution should or will be impose their will upon the student and that is not CPS. Giving students two choices is also not part of Plan B.

Timing is crucial to CPS. While CPS can be done in heated situations, it’s not ideal and may be too late at that point. Instead, CPS should be applied proactively. Greene contends that by studying a student’s triggers and lagging skills, you can predict most explosions. Circumvent negative situations by solving problems collaboratively and ahead of time. For instance, “I’ve noticed you don’t like to go to recess,” says Epstein. “Why is that?”

Alyson Pocklington, a seminar participant who’s been teaching for more than three decades, likes CPS. She finds the approach emphasizes what she already does—with one major difference. “I haven’t been collaborating with children. With some children, this may be key.” After practicing what she learned at the seminar, Pocklington was pleased that an explosive child who normally misbehaves when unsure of himself requested help instead—a strategy they’d brainstormed together.

Karen Hoffmann-Zak is a Toronto-based freelance writer and editor.