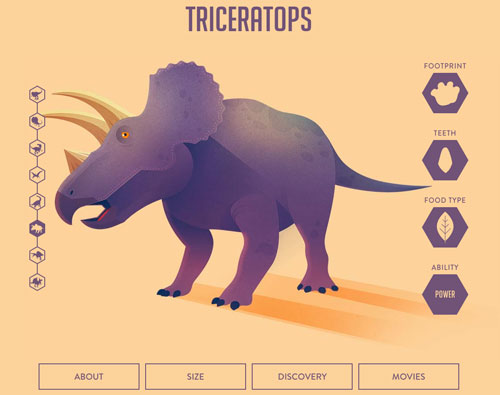 Teach kids about dinosaurs with this interactive fact book

Dinosaurs: Jurassic Facts is a free interactive fact book that features some well-known prehistoric creatures such as the Pterodactyl and Triceratops. Students can visit the website and scroll through the bios of each featured dinosaur to discover information such as their diet, age, habitat, appearance, and traits. The size and weight of the dinosaurs are also presented along with a visual graphic comparing them to humans.

There’s also a ‘Discovery’ tab that explains where and when the first fossils of each dinosaur was discovered and what we can learn from them. For example, a Triceratops fossil found in 1997 shows that its horn had been bitten off, with teeth marks matching that of the Tyrannosaurus. The word ‘dinosaur’ may derive from the Greek words for ‘terrible lizard’ but Dinosaurs: Jurassic Facts is certainly not frightening; it’s colourful and cheery, a great resource for young learners curious about the Jurassic Age. For more information, visit http://www.brighthouse.co.uk/dinosaurus-jurassic-facts.